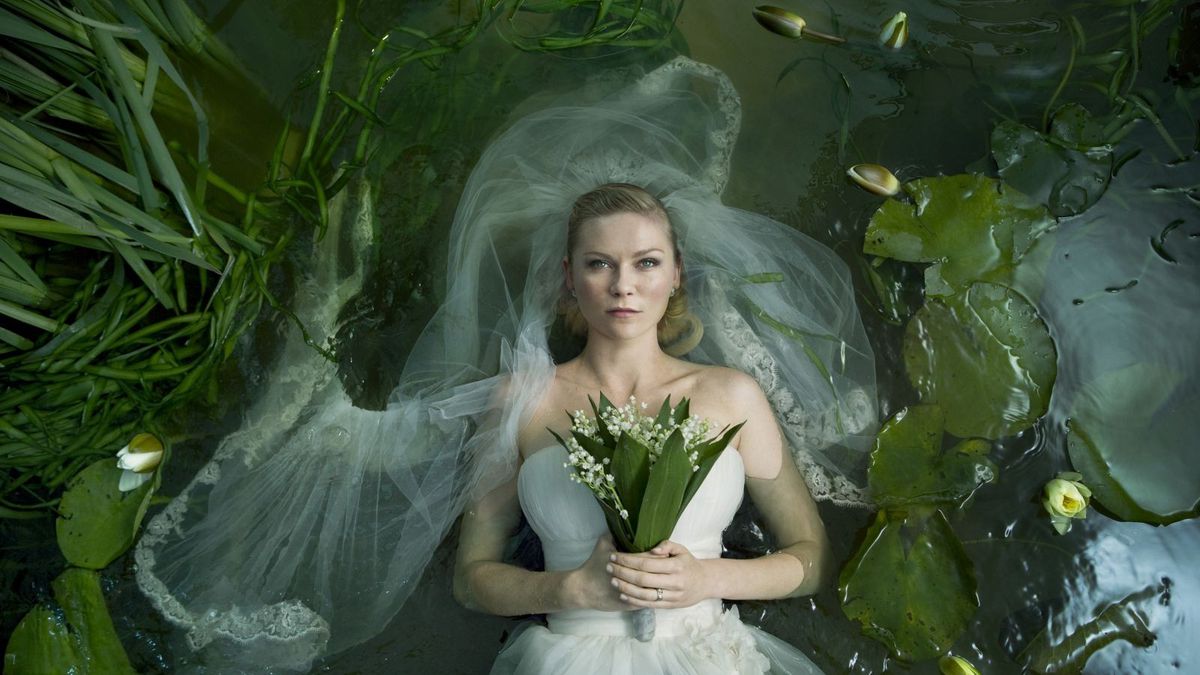 So this is how the world ends. A lavish wedding celebration at a picturesque Swedish castle sours quickly with the news that a planet — not just an insignificant asteroid, but a full-fledged world of its own, appropriately named Melancholia — is on an inexorable collision course with Earth. Life on Earth is doomed and we can see that doom slowly arriving, ever larger in the sky, at first only at night but then filling the odd-colored daytime horizon with suffocating dread. The end of days is at hand.

There’s no panic in the streets or shots of the Himalayas crumbling, just an eerie calm, a dead hush, as an already unhappy family tinkers with telescopes, prepares lunch, and sorts out its affairs. At the center of the family is Justine (Kirsten Dunst), whose marriage to a tongue-tied fellow named Michael (Alexander Skarsgård) looks thrown together in an effort to placate the restless, distracted bride. On the near sidelines hover Justine’s sister, Claire (Charlotte Gainsbourg), and her husband John (Kiefer Sutherland), going through the motions of rationalizing the threat, trying to keep a civilized lid on the situation. But the center will not hold.

Lars von Trier, the writer-director of this self-described “psychological disaster movie,” is not James Cameron or Roland Emmerich. The spectacle of cataclysmic destruction and screaming masses of people is not for him. Justine and her tight-knit, fearful little group await the coming storm in a state of mind that springs directly from the head of von Trier. The 55-year-old Danish art-film auteur (Dogville, Breaking the Waves), whose labored Dogme Manifesto until recently occupied much of his time — and arguably drained the energy from his films — achieved something of a crescendo of gloom with 2009’s Antichrist. But he was just warming up.

Or simmering down. There always seems to be some sort of externality diverting the attention from von Trier’s films. In Melancholia it’s the filmmaker’s depressed mental state. As he explains in the film’s voluminous press notes, von Trier dealt with his depression by “div(ing) headlong into the abyss of German romanticism. Wagner in spades.” The result is perhaps the most beautiful-looking film in a year of gorgeously wrought personal visions.

As the Earth implodes, Justine and her family ride horseback and flee across quicksand golf courses in hypnotic slow motion with the syrupy strains of Tristan und Isolde wrapping them, and us, in a blanket of cathartic allegorical despair. The effect is overwhelming. Glorious compositions wedded to rigidly controlled visual hysteria. There’s simply nothing like it onscreen. And we’re informed that von Trier feels guilty for pandering. Naturally.

Dunst is a revelation. Nothing in her filmography prepared us for the ethereal loneliness of her Justine or the power of her serene gaze as everything else in the frame gets crowded out by the encroaching planet (it’s impossible, unthinkable, that Penelope Cruz was von Trier’s first choice). Justine surrenders to Melancholia and so do we — if only for 135 drunken, overblown, delirious, ecstatic minutes. Stay depressed, von Trier.

Berner Presents Hippie Hill Went Up in a Glorious Blaze

Till Court Do Us Part