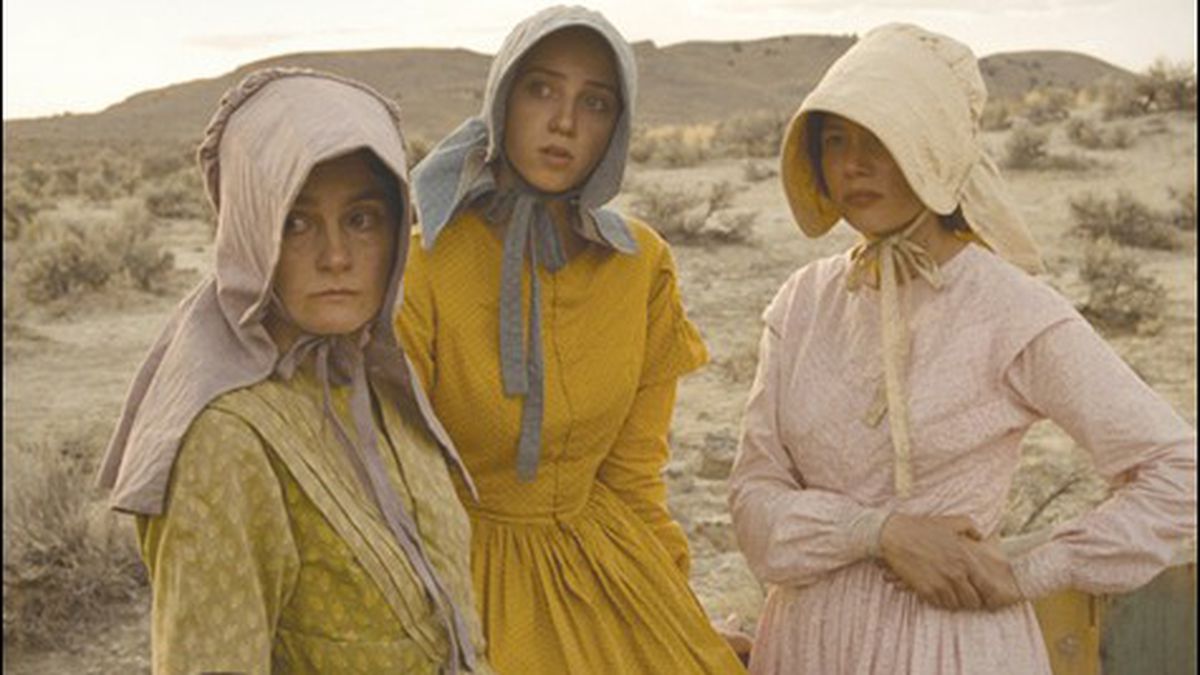 Are we there yet?

The western revival rolls into brave new territory with Kelly Reichardt‘s Meek’s Cutoff. It possesses neither the sardonic bravura of True Grit nor the parodic playfulness of Rango. Instead, Reichardt’s demanding, ultimately mesmerizing variation on an antique theme wanders off into a wilderness of its own, somewhere south of John Ford and Terrence Malick, where the essential stoic loneliness of what we call the American character comes into focus.

No buffalo roam and the deer and antelope wouldn’t dare play in the barren high desert where frontier guide Stephen Meek (Bruce Greenwood) is leading a breakaway party of three settler families — the Tetherows, the Whites, and the Gatelys — on a search for a short route across the Cascade Mountains, circa 1845. Having detoured off the “main stem,” shaggy old hoss Meek, a loud braggart whose most common riposte begins with the words “Hell’s full of …”, is apparently lost — as is gradually becoming evident to the settlers. Water is running low, tempers are frayed.

This basic predicament is the foundation of countless westerns — hardship in the Old West, the bravery and determination of the homesteaders, the unpredictability of fate and nature, etc. Reichardt shows us some of the same scenes we’d see in a classic Ford western, such as when the wagons have to be lowered down a steep, rocky hill, or the poetic shot in which the women are forced to throw out their grandfather clocks and rocking chairs, the accoutrements of civilization, in order to lighten the load for their tired oxen.

One of the differences between, say, Ford’s Wagon Master and Meek’s Cutoff is that Ford punctuates the trek west with exciting bits of narrative incident to keep the plot bubbling, while the long, arduous, physical feat of moving thousands of miles across hostile country is shorthanded into a few inserts. Not so for Reichardt and her frequent screenwriting partner Jon Raymond. The deadly monotony of the trip is dwelled upon in extended, dialogue-free shots of wagons bumping along, the fording of rivers, and the little company making camp in the eerie stillness, with no John Waynes or Ward Bonds in sight. It’s a caravan of frightened loners.

Meek is an ill-tempered fool, but the thirsty settlers, including Emily Tetherow (Michelle Williams, covered in calico and a layer of dust but still headstrong), her husband Solomon (Will Patton, also a Reichardt regular), Thomas Gately (Paul Dano), Glory White (Shirley Henderson), and Gately’s increasingly terrified wife Millie (Zoe Kazan), are reluctant to trust their own instincts in the wild. And so when Meek captures a solitary Native American (played by stuntman and former rodeo rider Rod Rondeaux) they are torn between trusting the unnamed Cayuse brave’s sign-language directions and continuing to follow Meek, who has been wrong about almost everything.

This “art western” portrait of American society in miniature was filmed outside the town of Burns in southeast Oregon, making it officially the final film in Reichardt’s Oregon Trilogy, alongside Wendy and Lucy and Old Joy —three stories of ordinary Americans in distress told from a decidedly female point of view. Eager reviewers have glimpsed parallels to the war in Afghanistan in the plight of the anxious settlers and their trigger-happy guide (Meek is all for shooting the Cayuse; Mrs. Tetherow wants to let him live). That may be stretching it a tiny bit, but the point is intriguing. Who’s to say the settlers’ version of “civilization” is any more useful or just than that of the Cayuse?

The deadpan pilgrims-versus-white-trash moral struggle may seem daunting at first, but it gradually blossoms into something more expansive and accessible. Take a deep breath and drink it in. True to her ultra-indie point of view, Reichardt fashions a vision more elaborate than just an anti-Ford or an anti-Malick. By draining the Ford-ian heroics and Malick-style hypnotic natural beauty out of the frame, Reichardt’s drama invites us to throw all our cinematic rocking chairs out the backs of our wagons, as well, and to pick up the argument where Mrs. Tetherow leaves off. Or not. The choice is ours. The landscape is infinitely patient.

OPD’s War on the Poor Needs to End