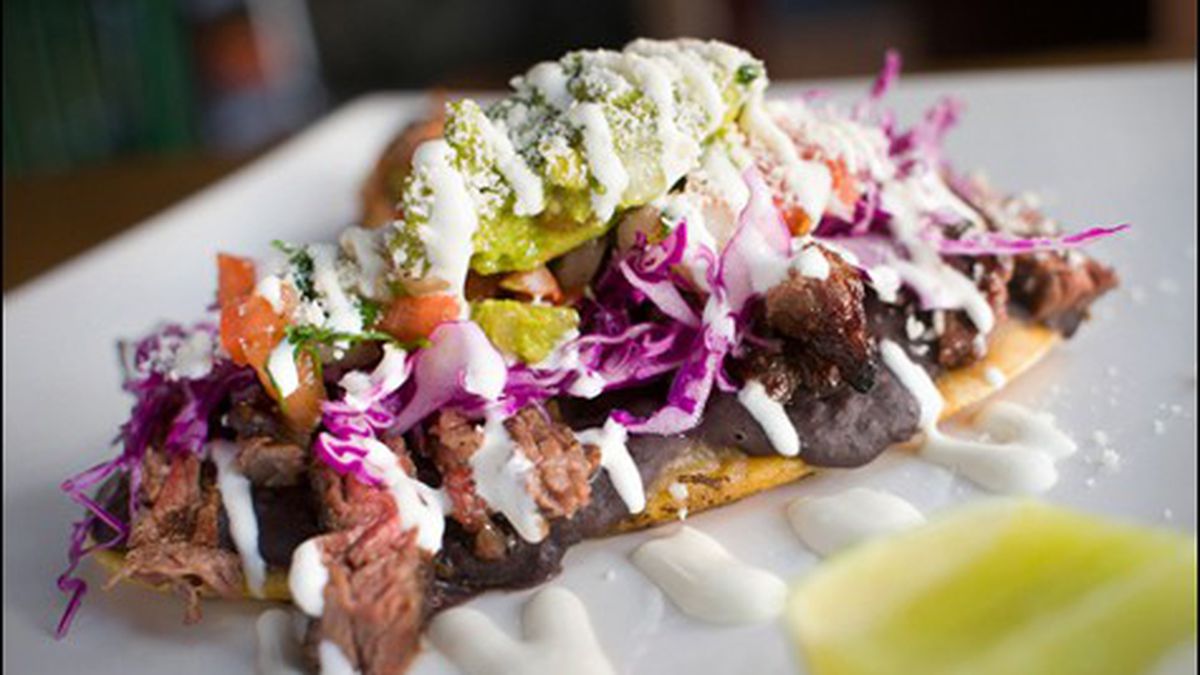 When you walk into Molcajete, the first thing you notice is the mannequin, a cowgirl dressed in pink: hat, belt, shirt, and all. It’s the kind of homey Mexican restaurant where the paint is cracked, the furniture has a well-worn look, and your server might be a sweet, earnest teenager, maybe all of fifteen years old, spending his after-school hours learning what’s presumably the family business. It’s the kind of quirky little family-run restaurant you’ll find up and down International Boulevard — the kind of restaurant that has a mannequin.

But Molcajete is located not in Fruitvale, but on the edge of Uptown Oakland (not known for its Mexican cuisine), on a quiet stretch of Webster Street set some distance away from all of the loud, trendy bars. And it’s an ambitious restaurant— one that aspires to a certain kind of polish. The owners, Manuel and Rosy Torres (who also run Antojeria Mexicana El Chilar, the tiny taqueria around the corner), clearly hired someone to do their graphic design — their cleanly typeset menu and snazzy logo (the traditional mortar and pestle known as a molcajete, of course) and shiny-looking website (which, unfortunately, is still mostly a blank template).

Molcajete is the kind of restaurant that pays attention to the little things and treats even heavy dishes with a deft, light touch. The refried black beans are a deep, glistening black, barely salty, and as ethereally smooth and light as whipped hummus. The salsas are notable for their bright flavors and the freshness of the vegetables — the onions, the cilantro, and Serrano chiles — and are served in a miniature version of the restaurant’s namesake. And, truly, this is a Mexican restaurant that pays more attention to presentation than your typical hole-in-the-wall. Entrées come on the kind of oversized, rectangular white plates and deep serving bowls that fine-dining chefs like to use to make the colors in a dish pop. Every plate comes with a little cabbage salad that’s dusted, attractively, with a sprinkling of finely grated Cotija cheese.

But maybe you’re of the mind that fancy garnishes and pretty plating are just window dressing — ways that upscale Mexican restaurants appeal to well-to-do diners and, perhaps, to avert attention from watered-down flavors and a lack of cooking chops. Rest assured: Molcajete is the real deal.

Where Molcajete shines, in particular, is in its many different incarnations of masa — the corn dough that is the backbone of any Mexican restaurant worth its salt. If, like me, you gravitate toward the most unique-sounding menu items, you might start with the chancla (literally, “flip-flop”), which turned out to be a thick, slipper-shaped tortilla (smaller than its more well-known cousin, the huarache) — a light and fluffy thing, with intense corn flavor. This came piled high with a kind of “meat salad”: cabbage, refried beans, tomatoes, Cotija cheese, and, scattered throughout, bite-size pieces of crunchy-chewy fried steak. It’s a sharp and concise rebuttal to anyone arguing that there isn’t delicious, interesting Mexican food to be found in Uptown Oakland.

Just as memorable were the molotes tinga, Molcajete’s take on a popular Oaxacan street snack: three masa turnovers — the masa airy and delicate, despite having been fried — filled with tender shredded chicken and a little bit of melted Monterey Jack, imbuing each little fritter, addictively, with a savoriness that reminded me of nacho cheese.

If we’re going to judge a Mexican restaurant on one item, let it be the humble tortilla, that most basic staple of the cuisine. I’ve lost count of how many fancypants Mexican joints (taquerias and sit-down restaurants alike) have disappointed me with tortillas that were bland and leaden, despite having (supposedly) been pressed and griddled to order. At Molcajete, the tortillas are slightly larger than a silver-dollar pancake and come just three to an order. But each one is so fragrant, and has such a wonderfully light texture, you’ll be tempted to get a second round — especially if you order a saucy entrée, like the restaurant’s cochinita pibil, a bright-orange, deeply flavorful pork stew that’s slow-roasted for several hours while wrapped inside a banana leaf. Even with an order of fish tacos — a wonderfully messy version that’s overloaded with fried rock cod, lettuce, diced tomatoes, and crema (aka Mexican crème fraîche) — the tortillas stole the show.

Compared to other Mexican restaurants around town, Molcajete has a relatively short, streamlined menu. But each dish has a cared-for quality; nothing seems like a throwaway.

For instance, even faux-Mexican restaurants offer enchiladas, but there aren’t many other places in Oakland that serve enmoladas — uncommonly tender chicken enchiladas that are swimming in a pool of sweet, cinnamony, eminently smooth mole poblano. And while chiles relleños are de rigeur, Molcajete serves an especially satisfying version — the roasted poblanos are coated in a thin egg batter before they’re fried and slathered in a chunky, tomato-based ranchero sauce. Carnivores, take heed: For an extra dollar, you can have the peppers stuffed with tender, crisp-edged pork carnitas instead of cheese. Slice it all up and eat it with tortillas, and you end up with something like a sloppy, flavor-packed carnitas con rajas taco.

And even though there’s only one agua fresca available each day — pineapple during one visit, cantaloupe during another — these beverages are always so refreshing, and so obviously packed with ripe fruit, that you forgive the fact that the restaurant doesn’t, at this point, serve any booze.

At the end of our first meal at Molcajete, as we polished off the last of our coconut flan (dense, smooth, and deeply caramel-y), I surveyed what was, at seven o’clock on a Friday night, a mostly empty dining room. You see, a little over a year after it opened, the restaurant doesn’t quite seem to have gotten much recognition yet, and that’s a shame. For my money, for a meal that’s fancy enough for a first date — but that has enough down-home goodness to satisfy the most committed chowhound — it’s hard to think of a better Mexican restaurant in Uptown Oakland.

Next ArticleMid-Week Menu: Umami Burger Oakland and The Star on Grand Take Off, Sobo Introduces Gluten-Free Ramen, and Off the Grid Debuts in El Cerrito