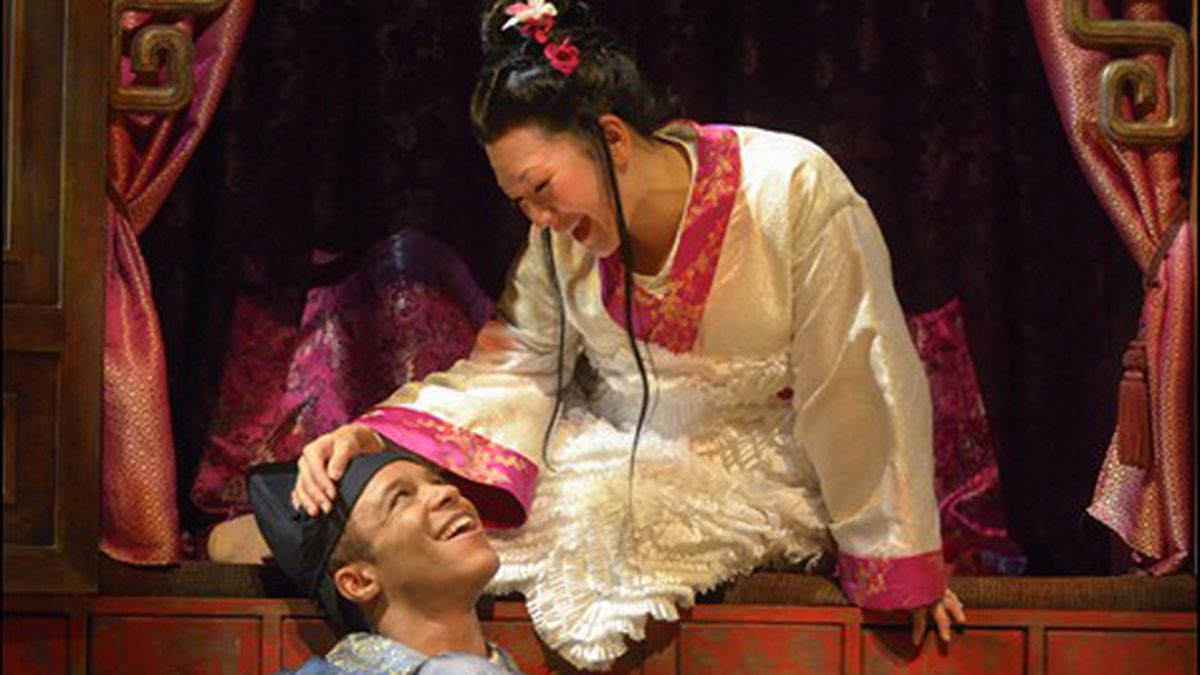 An ancient Chinese legend of shape-shifting sorcery and good and evil comes to Berkeley Rep.

The specter of the snake as a symbol of sorcery, temptation, and duality is ubiquitous. In Chinese mythology, a white snake from the spirit world transforms itself into a woman to join the mortals on Earth and seduce a trusting man. The legend can be traced back to Ancient China; it was passed down in the oral tradition before being written down sometime during the Ming Dynasty. Since then, the fable of the white snake has taken the shape of folktales, anime films, operas, and even a 3D action movie.

The story’s newest incarnation is a stunningly staged play, which opened last week at Berkeley Rep. The play’s adapter and director, Mary Zimmerman, displays her immense talents in this world premiere production. Beautiful and wildly imaginative though it is, the play has my admiration more than my adoration.

Zimmerman has made a career of revamping classics, reinventing ancient myths and fables in surprising ways that remind us of their relevance. This time, Zimmerman’s take even has political undertones; the adaptation reveals that the practices of religious hypocrisy and moral outrage, which are alive and well in our churches and houses of Congress, are, in fact, as old as antiquity.

The play is also about the art of storytelling. Similar in this way to Berkeley Rep’s most recent production, The Iliad, The White Snake highlights the shape-shifting that is part of the oral tradition. “Believe me,” are the first words of the play, as a storyteller begins to unwind her tale.

Throughout the play, narrators acknowledge the audience and the fact that this play is a legend, descended from other and alternate legends. “And this is when the tale starts to diverge,” a narrator says more than once, “like a forked tongue.” When the story forks with two versions of what happened, the storyteller always follows the more poetic of the two explanations.

Amy Kim Waschke plays the White Snake, a spirit who deceives her husband out of her love for him, not out of evil intent (as older versions concluded). Tanya Thai McBride plays the Green Snake, the comic sidekick, who has much the same role as the crafty servant stock character in the tradition of commedia dell’arte.

Christopher Livingston plays Xu Xian, the naive and trusting husband of Madame White Snake. For the most part, the performances are stylized and the characters are more mythic than down-to-earth. But Livingston’s performance is vaguely out of place — his affect and delivery are too casual. Jack Willis plays the villainous monk, bent on restoring the natural order that forbids a mortal to marry an immortal. The theme of piety in the face of marriage equality will likely resonate with audiences.

Zimmerman’s previous works, including the terrific Metamorphoses, Argonautika, and The Arabian Nights, are modernized takes on classics that are sprinkled with contemporary wit. In Arabian Nights, there’s an homage to Steve Martin’s King Tut dance. In Metamorphoses, memorably staged with an on-stage wet pool, the teenaged son of the Sun God “borrows dad’s keys,” totals the family chariot, and sets the earth aflame.

While the artistry of The White Snake is striking, the play is not as engaging or as witty as these works. It is the visual design that makes The White Snake a theatrical achievement.

Up in the realm of the immortals, the White Snake is initially seen as a puppet — a silky fabric snake whose slithery motions are maneuvered by a puppeteer moving two attached rods. Later, a choreographed line of men and women hold white paper umbrellas that angle and become snake scales that coil in unison. Billowing shimmering fabric creates clouds, waves, and mountains. Ribbons of unfurled paper create a rainstorm. The set — and all the movement on it — is a gorgeous impressionistic spectacle.

Zimmerman’s artistry here has much in common with the avant-garde theatrical wonder of Julie Taymor’s The Lion King, which opened last week at the Orpheum Theatre in San Francisco. Both women are visionaries who put digital realism to shame. Fifteen years after it opened on Broadway, The Lion King continues to inspire awe. The stage musical is far more exciting than even the new 3D version of the Disney movie.

While Taymor used the colors and fabrics of Africa to create an organic mise-en-scène, Zimmerman furnishes The White Snake with the sights and sounds of China: paper umbrellas; bamboo accents; red blossoms; a minimalist and elegant amalgam of unplugged puppets; gentle, evocative projections and lighting (by Shawn Sagady and T.J. Gerckens, respectively), and glorious costumes (by Mara Blumenfeld). With Daniel Ostling’s brilliant scenic design, the play is a radiant reminder of the magic of low-tech.

Five Seconds That Changed Everything