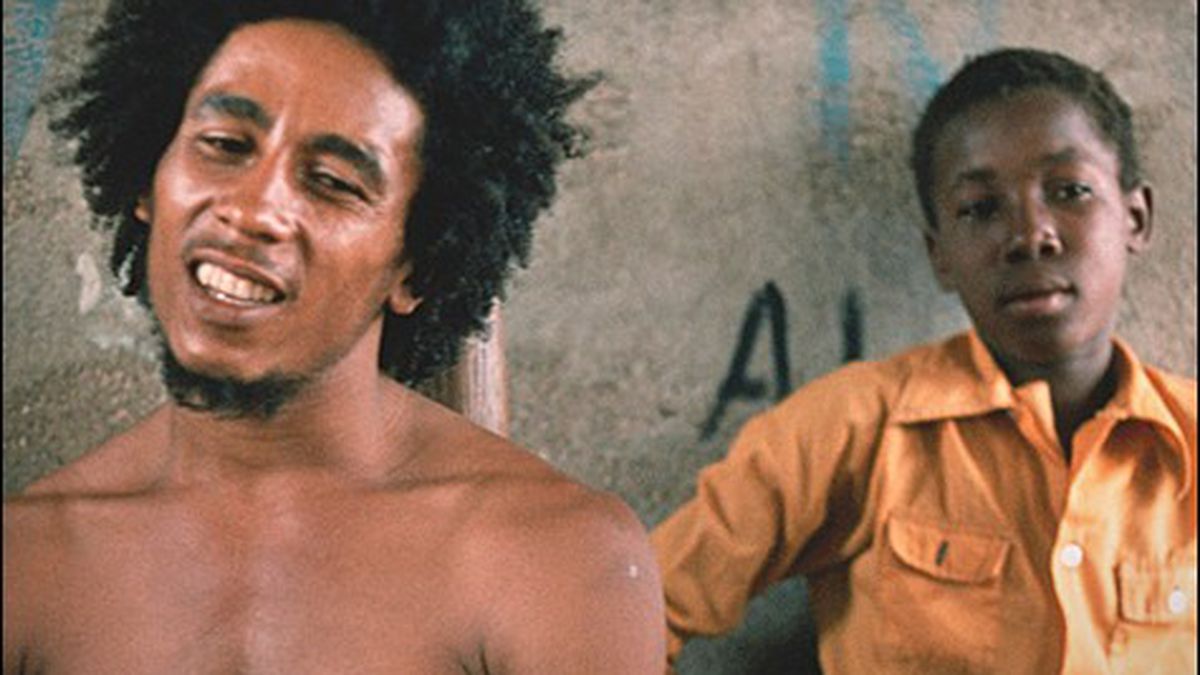 Che Guevara is one of the most noticeable, with John Lennon, Michael Jackson, or Tweety Bird running close behind. But the champ is Bob Marley. No one in T-Shirtville comes close to the perennial worldwide popularity of the late reggae singer/songwriter. How is it that a Jamaican pop musician who died 31 years ago retains such a grip on the imaginations of fans everywhere? The new documentary Marley provides a clue.

Robert Nesta Marley was born in 1945 near the backcountry community of Nine Mile, Saint Ann Parish. His father was Norval Marley, a white British Army veteran who spent very little time in his family’s lives. Young Bob’s “half-breed” skin tone was one of his earliest obstacles, but after moving to Kingston’s notorious Trenchtown and falling in love with the idea of making music, the “half-and-half” tag ceased to hinder him.

In fact, Marley’s cafe-au-lait look let him right fit in with the youthful international audience that was just beginning to catch on to reggae, the indigenous Jamaican beat — combining American rock, R&B, calypso, and ska — that Bob adopted, then perfected alongside such contemporaries as Jimmy Cliff and Peter Tosh. Marley and his band, The Wailers, burst onto the charts in the early Seventies in London on the power of his haunting vocals and socially conscious songs, and he rode the wave for ten wild years before succumbing to cancer in 1981. He remains the most popular reggae artist of all time.

Glasgow-born filmmaker Kevin Macdonald (The Eagle, The Last King of Scotland), who reportedly inherited the Marley biopic after Martin Scorsese and Jonathan Demme dropped out, digs up a prodigious amount of period footage and insider talking heads to tell Marley’s story. Invariably, they speak of his tremendous will to achieve. He evidently took his Rastafarian religious beliefs to heart with great seriousness of purpose. Marley had a character trait in common with other charismatic superstar athletes, politicians, and performers — a fierce competitive determination to excel and establish his message. In his case the message was an unselfish one of sharing and let-live. Close friends like bandmate Bunny Wailer and girlfriend Cindy Breakspeare testify that Bob gave away money to a steady stream of admirers every day at his Kingston home. The only thing he enjoyed more was a hard game of soccer.

Marley and reggae weren’t everybody’s cup of tea, of course. Anyone singing about “One Love” in the days when The Bee Gees, The Commodores, Blondie, and The Sex Pistols ruled the airwaves was in for an uphill battle in the hardball US market. Marley supposedly anguished over the fact that he could never achieve wide acceptance in the African-American community, and that most of his US and European concerts were a sea of white faces. (We can only imagine what would have happened if Marley had been able to get on stage with James Brown.) Maybe it’s just that Marley’s music, in the same manner as his beloved “footie,” was destined to occupy a niche in the US rather than the main stage. Fortunately for Marley’s legacy, his songs have had amazing staying power.

The live concert scenes are worth the ticket price. The filmmakers got hold of candid performance footage from the mythologized “One Love Peace Concert” in Kingston, where Marley joined hands with rival Jamaican politicos Michael Manley and Edward Seaga. The live versions of “Jammin’,” “No Woman, No Cry,” “I Shot the Sheriff,” and “Trenchtown Rock” are also superb, and there’s no skimping on local Jamaica scenery with classic tunes overlaid. Director Macdonald effectively lets the talking heads and the music explain the longevity of Marley’s appeal. The most poignant note, however, belongs to his daughter Cedella. As the doc draws to a close, she laments that she and her brother Ziggy (Bob fathered eleven kids with seven different women) never really had their dad as himself, for themselves. They’ll have to make do with his songs, just like the rest of us.