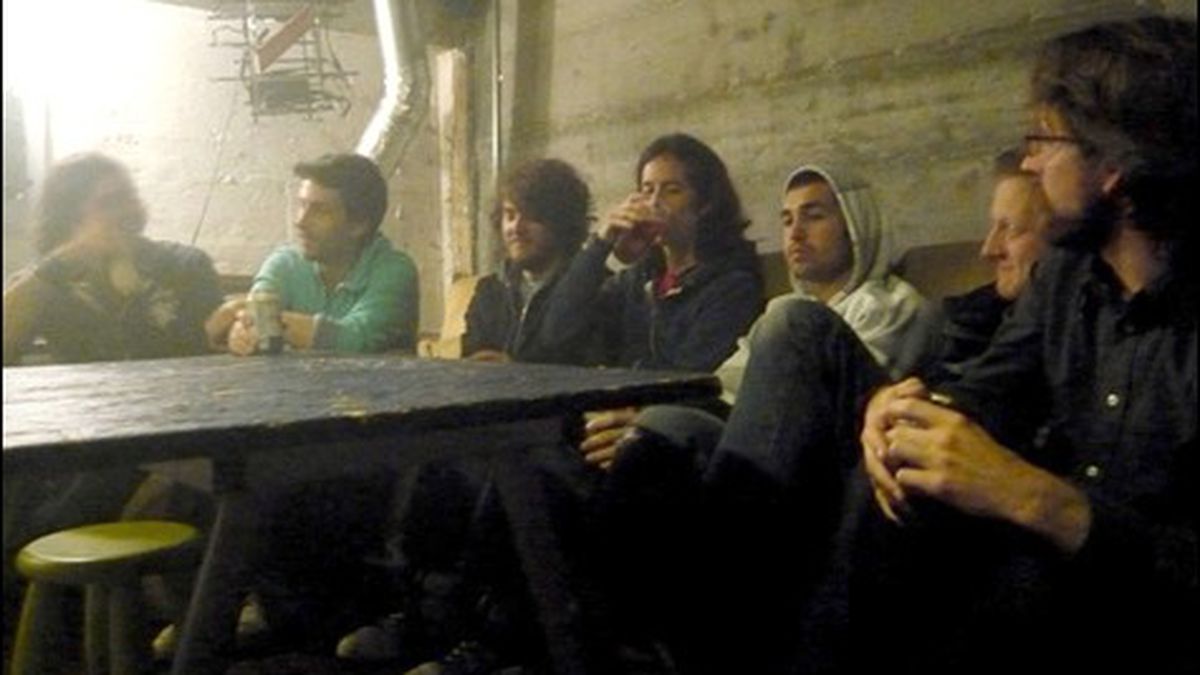 It was one of the first really cold nights since daylight savings time ended — a Friday, but the kind of Friday when you venture out for soup and whiskey rather than loud, buzzy electronic music. Nonetheless, seven guys from Oakland and Berkeley had all set out to San Francisco’s Rickshaw Stop. Why? For the music, definitely — but also for each other.

There are eight guys, give or take. They represent about six bands: Yalls, James and Evander, Elephant & Castle, Ander, Parentz, and Short Circles. That doesn’t count the intra-group side projects though. They’re the mild-mannered nerds of the music world: knob-twiddlers, beat scientists, head-bobbers, stoners. And whether or not they meant to, they’ve created a tight as-yet-unnamed East Bay collective.

Once the group was seated in the Rickshaw’s hazy attic green room, their cohesiveness was undeniable. They could sit for hours and talk shop, getting thoroughly engrossed in conversations about sampling, mixing, and software. When someone spoke, they waited patiently, attentive to each others’ opinions.

“Five or ten years ago, we probably would have all been one band,” acknowledged Jeremy Sullivan, who records as Parentz. “But with electronic music, we can all do our own thing solo or as duos.” Sullivan is one of the few members who doesn’t fit the “stoner” tag, despite making some of the spaciest, most conceptually-out there jams (much of his music to date has been loosely based on the career of Tom Hanks).

James and Evander are probably the most “band”-like band — they’re more into straightforward pop than the others: Lush, catchy instrumentals and strong vocal performances fill the foreground of their tunes. They’re the ones performing tonight, tapped by the Rickshaw booker out of the blue, which they take as a good sign. The duo started out running in rock band circles, but eventually found their place with these indie-electro in-betweeners.

“Oakland has a lot of enclaves,” member Glenn Jackson surmised. “There’s dudes that do weird house music, and random dubstep shows, but for the most part, there are only like ten or twelve of us who are doing indie-minded beats.” He met the band’s other half, Adam Myatt, at Ex’pressions College in Emeryville, a recording school that gave them free studio time as part of their curriculum. They started making music together because they couldn’t find bands that wanted to use the odd late-night time slots. Myatt is lucky enough to have a job recording music, as an engineer at Sharkbite Studios in Oakland (next door to the 3rd Street practice space that they all share). In addition to doing telecom work, Jackson runs the blog at Mapzzz.com, which is probably the most logical center-point for the collective. Mapzzz has released free EPs from almost all of the artists, and regularly posts about each band.

For Jackson, it’s all about the support network the group provides. “Oakland is mainly geared toward punk and garage rock and stuff, and when we found people that were into similar stuff, we were just like, ‘Well let’s hang out and make some fuckin’ noise,'” he said. “Every one’s been super nice, and it think it’s cool that we’re all going for different stuff, but we all appreciate what everyone else is doing.”

The group coalesced about a year ago, introduced to one another by their friend Andy Peterson, the only member not present at the Rickshaw that evening. Peterson, who records under the name Ander, specializes in darker electronic instrumentals based in samples and found sound. He also does a ton of remixing — an element that’s crucial to the collective’s livelihood. With each solo artist at varying levels of recognition, trading remixes is one of the main ways they take advantage of their network, and show off the community they’ve built.

With such disparate sounds, it’s surprising to find out that they share much of the same equipment and even the same samples. For instance, when one member happened upon a massive drum library, filled with thousands of samples, it got passed around from one person to the next. They’re not worried about sounding the same, though. For instance, everyone in the group agrees that Dan Casey, aka Yalls, is the “funky” one. Even if he’s using the same sounds, his penchant for effects and proliferative clusters of notes renders his tunes totally different from the others.

Casey seems genuinely pleased that the group got together.”I moved here from Philly with my girlfriend three or four years ago and I didn’t do anything for like two and a half years,” he said. “And then we broke up and I started Yalls, met Andy, and he introduced me to all these people.” Casey now spends most of his time with them. He gloated about it: “What a great life I have that I can just ride my bike to someone’s house, jam on some synths, and then Dylan comes over and we can make music with visuals, and then I can go over to Andy’s ….”

The Dylan to whom he refers is Dylan Travis of Oakland rock band Man/Miracle, who’s a convert to the collective. He said he’d never found such creative symmetry before: “It’s fascinating after being in a rock band, where everything is just a terrible compromise,” Travis said. “And I think that spiritually our music is connected because, well, we’re all nerds.” Facetious, yes. But also true. Casey recalled that this point first dawned on him when he had everyone over for a video game night: “I work for an LED company, so there were lights everywhere, and [Dylan] had his visual synthesizer projecting stuff.” Ten people showed up. It was a wrap.

But where to go from here? Video games, weed-smoking, pizza, and beats are all well and good, but nearly half of the group is unemployed, trying to scrape together work engineering and recording however they can. Dave Reep, who calls himself Elephant & Castle, after a London neighborhood where he grew up, is one of the first to strike out on his own. In addition to more widespread attention from electronic tastemakers like Mary Ann Hobbs, he’s been tapped by Plug Research (Flying Lotus’ first label), and is moving down to LA. His friends are genuinely supportive — albeit for slightly mercenary reasons. “Just one of us has to make it big, and then we’ll all mooch accordingly,” Casey said.

Mooching or no, they seem to work amicably. Members of the group say they’ve never argued, except for once, when they had to decide whether or not to name the collective. Most everybody seemed casually disinterested. Jeremy Sullivan took up the cause and tried to generate some enthusiasm, to the chagrin of others.

“I just want everyone to realize, that if we want to, this is our chance to get a name out there.” But with ten minutes until James and Evander were to take the stage, the table littered with expended paraphernalia, no one seemed eager to craft an image for the collective on the spot. Dan Casey held the line, maintaining that choosing a name wasn’t necessary.

“I just think that it’ll come name naturally,” he said multiple times, “we don’t need to force it.” And that’s what keeps them working so smoothly: keeping it casual.

Best Skate Shop: Where it’s safe to lurk for 29 minutes