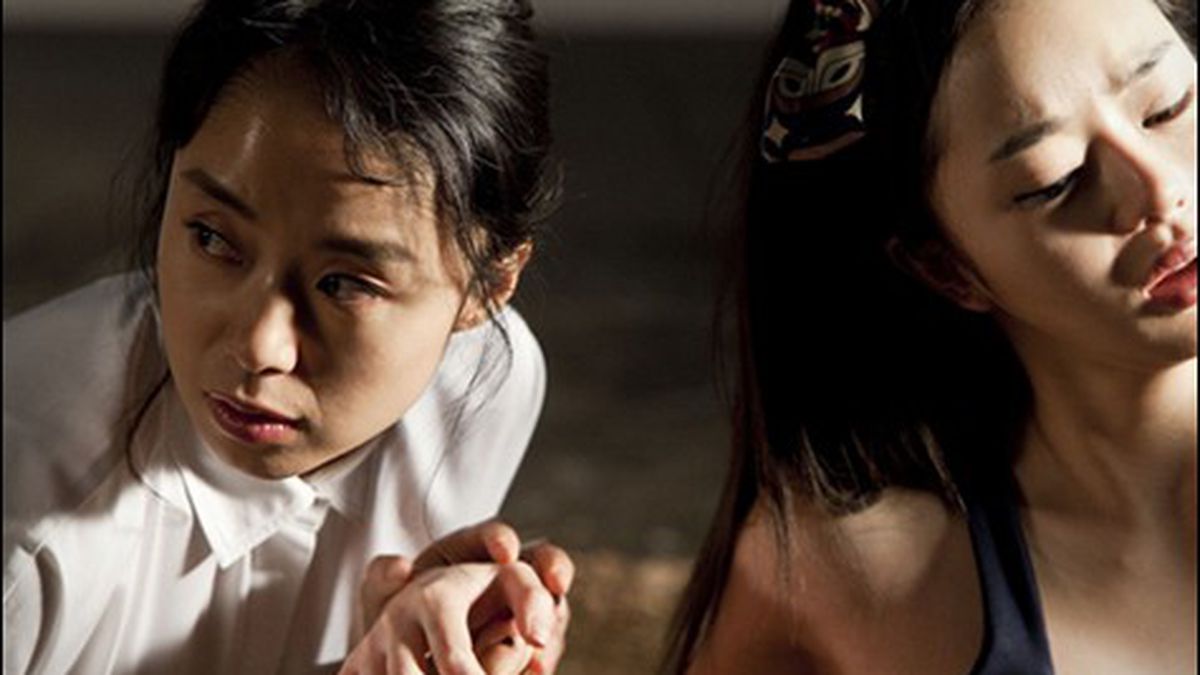 Maid in the Shade: The Housemaid and The Rite

What's a worse job, cleaning house for a wicked family or exorcising demons?

Just to show us who’s boss, writer-director Im Sang-soo opens his silky thriller The Housemaid with a scene most filmmakers would save to use as the shocking climax. In a bustling South Korean city entertainment district on a busy night, a young woman climbs out on the ledge of a building above the street, and almost no one notices her until she jumps to her death on the pedestrian mall below.

After the body is taken away and nothing remains except the chalk outline and blood splatters on the pavement, two women workers from the nearby food stands approach the blood stain, as if drawn to it magnetically, then quickly retreat. It so happens that one of the women, Lee Eun-yi (played by Jeon Do-youn), is on the verge of taking a live-in domestic job with a rich family, and nothing, not even the horrific scene she has witnessed, can prepare her for what she is about to go through.

Eun-yi is the sort of character we naturally worry about. Like the Second Mrs. De Winter in Rebecca or Sophie in La cérémonie, she seems too slight and submissive to defend herself in this new job in a strange house. Her reticence might be mistaken for weakness, and we’re concerned for her welfare even though we really know nothing about her except that she and her girlfriend sometimes sleep cuddled up together. But as in the above two films, events have a way of determining their own outcomes despite outward appearances.

Mr. Goh, known to his family as Hoon (played by Lee Jung-jae), is the master of the house. We never learn exactly what his business is, but his success is evident from his lordly manner and the home itself, an imposing pile of modern architecture, multi-roomed and chilly, with oddly picturesque light fixtures on which the camera lovingly dwells. Hoon has a young, pretty, spoiled, and very pregnant wife named Hae-ra (Woo Seo) and a somewhat blasé little daughter, Nami (Ahn Seo-hyeon), who’s of the age at which it’s impossible for her to be anything other than completely truthful and candid about any subject.

Eun-yi is not the only servant. Always hovering nearby, with a scowl that Rebecca‘s Mrs. Danvers might admire, is the faithful head housekeeper Cho Byung-sik (Yun Yeo-jong), who eyes the new maid as if Eun-yi had just emerged dripping from a public toilet. The pecking order immediately establishes itself. Innocent Nami takes to the kind and considerate Eun-yi, who cares for her and reads her bedtime stories. Lady of the house Hae-ra, however, despises this new, attractive rival and delights in humiliating Eun-yi in tandem with Hae-ra’s elegantly malevolent mother, Mi-hee (Park Ji-young). The handsome Hoon takes his time warming up, but eventually adopts a routine of dropping by Eun-yi’s room in the middle of the night and helping himself to sexual favors — reciprocated, however reluctantly, by the eager new domestic.

Aside from Eun-yi, who grows and develops complexity as the story rolls on, the one character we can’t quite stereotype is Mrs. Cho. Her initial disdain for Eun-yi gradually gives way to a grudging camaraderie, as if they’re fellow inmates in this luxurious prison, eating the rich leftovers and listening to the boss play classical piano. Later, as the plot thickens and disturbing “accidents” start to take place, we’re not certain who holds the upper hand: the envious mother-daughter team of matrons or the league of bitter underlings. The conflict congeals solidly around the females. At some point it’s clear that Hoon is no longer needed — as if he were merely a device to set the four-way cat fight in motion.

The Housemaid is adapted by filmmaker Im and writer Kim Ki-young from a 1960 film of the same name by Kim, unseen by this reviewer. Im, who pumped a maximum of sex and mayhem into his zany narrative drama about the assassination of South Korean president Park Chung-hee, The President’s Last Bang, turns the overt intensity down a notch for Eun-yi’s story, but maintains that quintessentially Korean flair for visually startling set pieces.

Eun-yi rightfully deserves to be labeled a sex object, but her subtle emotional transformation is what this movie is really about. The master-maid hanky-panky is more in the nature of a dollop of whipped cream atop a sundae of resentment. In its class-warfare specifics and director Im’s cool, detached observation of the household power struggle, this compact, sophisticated chamber drama takes a significant place in the so-called Korean New Wave, a tide as deep and dark as any patch of ocean between here and Seoul.

What was that biblical warning about lukewarm people? We’re not suggesting folks should spew Mikael Håfström‘s The Rite out of their mouths, but it deserves that, for nothing more than its iffy writing.

Less a “horror” flick than a simple-mindedly thoughtful reflection on the crisis of faith of a young Roman Catholic seminarian named Michael Kovak (Colin O’Donoghue), The Rite rushes into that peculiar corner between grotesquery and religion where only fools, and filmmakers of the Luis Buñuel-Carl Dreyer weight class, dare to tread. And comes up bloodied.

Michael, spiritually conflicted son of a mortician (Rutger Hauer), wants to drop out of seminary school but is convinced by kindly Father Matthew (Toby Jones) to instead travel to Rome in an attempt to renew his faith by attending the Vatican’s exorcism academy, or some such. From there, it’s only a short step to the door of renegade Welsh priest and exorcist extraordinaire Father Lucas (saturnine Anthony Hopkins). Or is it the gateway to hell?

Father Lucas has work for the lad. Pregnant Italian teenagers and little boys are being possessed, and Michael’s task is to not only combat the Evil One but also conquer the doubts in his own soul. Of course, if you’re going to make a movie with a poster depicting Hopkins in full Hannibal Lecter mode, you’d better have twisted anatomies, toads, and red-eyed donkeys all over the place, plus electronic belches. Many electronic belches. Michael Petroni and Matt Baglio‘s scenario falls about 500 miles short of The Exorcist, right in the crack between a sincere, bland religious drama and a monster fest. No one comes away satisfied. The devil is in the details, men.

Kelly Vance
Previous articleChappelle’s Show Sells Out Instantaneously at The New Parish
Next articleWednesday Must Read: Oakland May Get Weed Farms After All; Claremont Hotel Files for Bankruptcy
18,645FansLike
12,284FollowersFollow
66,383FollowersFollow