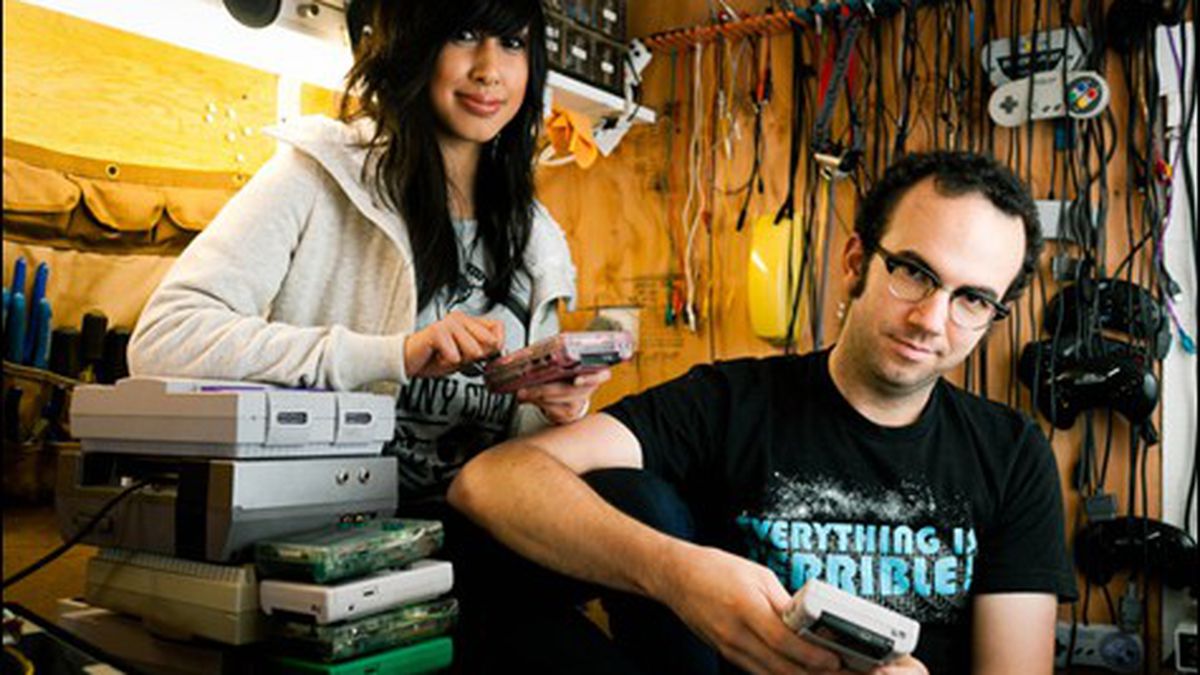 "Chip music" might sound like a novelty, but The Glowing Stars treat it as a craft and an artform.

Matt Payne currently owns about twenty Game Boys, which, for him, is a relatively small cache. Several of them sit haphazardly atop the Melodigrand mini piano in his living room, some looking boxy and gray and old, others dyed in bright, translucent colors. One even has a fancy knob affixed to its case, which serves as a “pitch-shifting modulator.” Payne says he’s procured Game Boys for as little as $2, though he has also scavenged a few from his friends’ old toy boxes or desk drawers. To most people, they’re a relic of the Nineties, when hand-held videogame devices were a popular form of home entertainment. To Payne, they’re a muse.

He and another local artist, Lizzie Cuevas, use Game Boys as the primary instrument in their experimental “chip rock” band The Glowing Stars. It’s part of an emergent scene whose members favor vintage machines over traditional instrumentation, partly because of the novelty and partly because they sound cool. Moreover, Payne notes, they’re accessible: “Since it’s easy to get the hardware, it’s really easy to make,” he explained, adding that he tends to think of chip music more as a set of tools than a bona fide genre.

It’s also a cottage industry. Ten years ago, anyone who wanted to modify a Game Boy for artistic purposes had to reassemble it entirely from scratch; now you can purchase kits that include back lights, screens, custom buttons, or capacitors. Software programs like LittleSoundDJ — which hit the market in the early-2000s — allow users to compose directly on their Game Boys, using what’s essentially a mini four-track synthesizer. Payne pulled out one of his Game Boys to demonstrate. He switched it on, waited until four thick bars rolled across the screen (one representing each track), and then started pushing buttons. Each track produces a limited range of sounds, he explained. One only makes sounds specific to videogames — like the “ding” of Mario grabbing a coin — while another only makes explosion sounds (Payne and Cuevas use them as percussion). But there are enough commands built into the program to allow for fully orchestrated music.

In some ways, it’s easy to see why Payne and Cuevas gravitated to this format. They’re both nerds, after all — or, in Cuevas’ words, “very nerd-centric.” She’s the associate editor of Gamer magazine and an occasional freelancer for PC Gamer — meaning that videogames are pretty much the center of her life. Slender and stylish, but surprisingly demure in person, she’s absolutely formidable on the Internet: 3,600 followers on Twitter (if you don’t count the additional 154 who follow the account she made for her dog); up-to-the-minute WordPress and Tumblr pages; and a credit as the first woman to appear on “TalkRadar,” the videogame podcast for GamesRadar.com. She’s currently reviewing a one-hundred-hour RPG game called Skyrim, which has consumed about thirty hours of her week so far. Oh — and she plays the guitar.

Payne, who works as a technician in the music and theater departments at Cal State East Bay, also handles a lot of the nuts and bolts in Glowing Stars, allowing Cuevas to be the artiste. He explains it thus: “I introduce Lizzie to curly-haired musicians, she becomes infatuated with them, she writes sad acoustic songs and gives them to me, and I turn them into trip-rock party anthems. That’s kinda the way it works.”

Well, kinda. Cuevas does indeed prefer composing on an acoustic guitar, and for all her modern flair, she has a slightly forlorn singer-songwriter aspect. A couple weeks ago she played an unplugged set at Vitus, rehashing most of the Glowing Stars’ material sans Game Boys. Turns out that in its original form, the music sounds like melodic indie rock. Payne is the one who filters it through handheld devices and adds adornments like a bridge or an altered melody line. Luckily, Cuevas trusts his judgment and usually accepts his changes. They’ve only had one argument, and it was about an outfit.

Considering the limitations of their medium, the music that The Glowing Stars produce is surprisingly intricate. It has rock chord progressions, for one thing, which aren’t easy to write on a crude four-track system; Payne often arpeggiates the chords because he can’t actually stack a bunch of notes on top of each other at once. (He says arpeggios are a significant trope of chip music.) Moreover, every song includes bass and harmony parts, in addition to a melody line. Sure, the bleeps and whizzes and coin-grabbing sounds are omnipresent, but they’re woven into a form that employs classical conceptions of musicianship.

Much of that owes to the band members’ musical backgrounds. Payne, who started playing music at age five, can handle an arsenal of string and percussion instruments; he plays drum and accordion on the band’s EP. Cuevas has played guitar for about a decade, but she also got an early start with piano lessons in second grade. They both have impressive CVs in the Bay Area rock scene, too — namely in the pop-punk band Sputterdoll (Cuevas played guitar and sang, Payne played keys, trombone, guitar, and other miscellany). They met at a 2005 tsunami relief benefit at Bindlestiff Studio in San Francisco. At the time, Cuevas was playing in Sputterdoll and Payne was half of the electronic “pop culture parody” duo Tensegrity Nine.

“I thought their band was awesome because Matt’s totally into the whole performance art aspect,” Cuevas said, explaining that in this case, “performance art” meant fly costumes and choreographed dances to enhance the music. Payne wound up joining Sputterdoll and bringing in his campy sensibility, but he and Cuevas ultimately decided it could be better applied in a videogame act. They formed The Glowing Stars about a year ago and cut their first EP, Anything Past That, in July. They’re distributing it digitally and on a small flash drive that looks like a Game Boy cartridge. Payne eschews traditional CDs, but says they might eventually record something on vinyl.

So the band’s music passes muster, and it’s quite a spectacle on stage: Payne and Cuevas wear coordinated costumes and handle multiple live instruments in addition to their Game Boys (she plays guitar; he plays keytar and drums). But a large part of The Glowing Stars’ appeal lies in the sentimentality of Cuevas’ lyrics. Anything Past That opens with a song about an unrequited crush: I swear I’m not a stalker, and I don’t need a doctor to analyze what’s going in my head, Cuevas croons in a high, woozy alto. In another, decidedly sadder ballad called “I Know Now,” she sings about being smitten over a light, syncopated videogame beat that makes the whole thing sound like a love song for a machine. Then Payne brings in his accordion, and with it all the trappings of traditional romance.

The idea that Game Boys could be grist for art may never catch on with mainstream audiences; no matter how intentional the lyrics or how artful the production, chip music will always be an acquired taste, after all. That said, The Glowing Stars handle the form extremely well, and they seem to derive as much artistic satisfaction from repurposing machine parts as they do from strumming guitars. Payne says he now keeps a Game Boy in his backpack at all times, just in case the muse hits him.