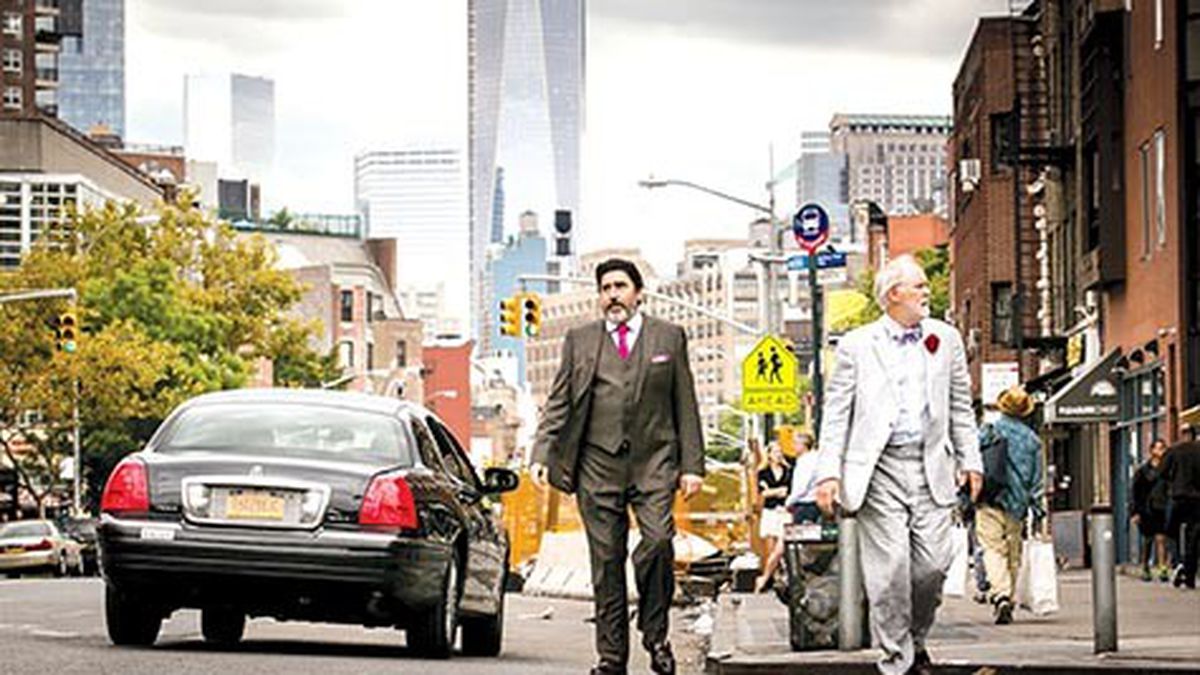 We’ve seen our share of dramas and sitcoms about LGBT couples, but very few that have the wit and style of Ira Sachs’ Love Is Strange. It’s the sort of topical film that comes along only rarely, that completely brackets its intended subject, but also takes that extra leap across real or imaginary divides to register with anyone who identifies as human. It’s that good, and what’s further fascinating about it is that it doesn’t come across as corny or preachy — before we even have a chance to worry that director Sachs’ and co-writer Mauricio Zacharias’ story might be calling attention to itself, it has already grabbed ahold of us.

Ben (John Lithgow), a fine arts painter in his early seventies, and George (Alfred Molina), a sixtyish music teacher, have just gotten married as the capper to a long-running relationship. But before the ink is dry on their marriage papers, George is called into the office of the Catholic parochial school where he works, informed that he’s in violation of a “morals clause” he previously signed, and fired on the spot. Both men immediately begin looking for work, but it’s obvious that they can no longer afford their lovingly decorated Manhattan apartment. After a family powwow, it is decided that Ben is to “temporarily” move into the Brooklyn home of his nephew Elliot (Darren Burrows), Elliot’s wife Kate (Marisa Tomei), and their teenage son Joey (Charlie Tahan). Meanwhile George moves downstairs in the couple’s original building for a room in the flat of two gay NYPD officers.

For George, this means lots of noisy after-work parties with his roomies and their multi-culti friends, a raucous counterpoint to his new career as a private piano teacher. George is inclined to shrug his shoulders and bear it. Ben’s case is more complicated. He now shares a bunk bed with Joey, a precarious personality in the full flush of adolescent angst. Moreover, Ben’s habits — his chattiness, paint cleanup mess, etc. — chafe against Kate’s work-from-home arrangement as well as Joey’s after-school private life. Complaints are made, and Elliot is forced to reconsider his generosity to his uncle. Ben and George miss each other but there seems to be no solution.

It’s at this point in an ordinary movie about characters in this situation that the tone of the film asserts itself. Is it going to be a lighthearted lifestyle comedy or a downbeat drama of social injustice? How about neither? Or both? New York filmmaker Sachs, who made the excellent, naturalistic gay romance Keep the Lights On (2012), opts for a similar observational approach with plenty of room for individual characters to step up. In its best moments, it recalls the graceful European comedies of manners of Olivier Assayas or André Téchiné. The world shifts on its axis, someone falls off, and it keeps on turning.

Ben and George’s predicament is only one facet of the urban blahs everyone suffers in Love Is Strange. The high cost of New York City housing and the limited blessings of rent control are on everyone’s mind. In some respects, the film is more of a classic recession special than gay-themed social commentary. The gay, senior citizens feel the weight of time — George can’t relate to Game of Thrones, for instance, and Ben has trouble with stairs. As for reluctant young roommate Joey, he seems jealous when his school friend Vlad (Erich Tabach) begins posing for Ben on the rooftop. Is Joey gay, too? Does it matter? Meanwhile, there’s Kate’s jitters and Elliot’s indecisiveness and the gay cops Roberto and Ted and one wonderful scene of George with a pre-teen piano student, urging her to realize her potential. As if we were in any doubt of Sachs’ long view of humanity, the music track is devoted exclusively to Chopin’s solo piano music.

Lithgow and Molina outdo themselves in their roles. Many of their best “lines” are unspoken, with facial expressions doing the heavy lifting. It is former child actor Tahan (I Am Legend), however, who steals the movie as the insecure Joey. His character arc is nothing more or less than the passing of a generational torch, with art as the common denominator. Who knows the mysteries of the human heart?