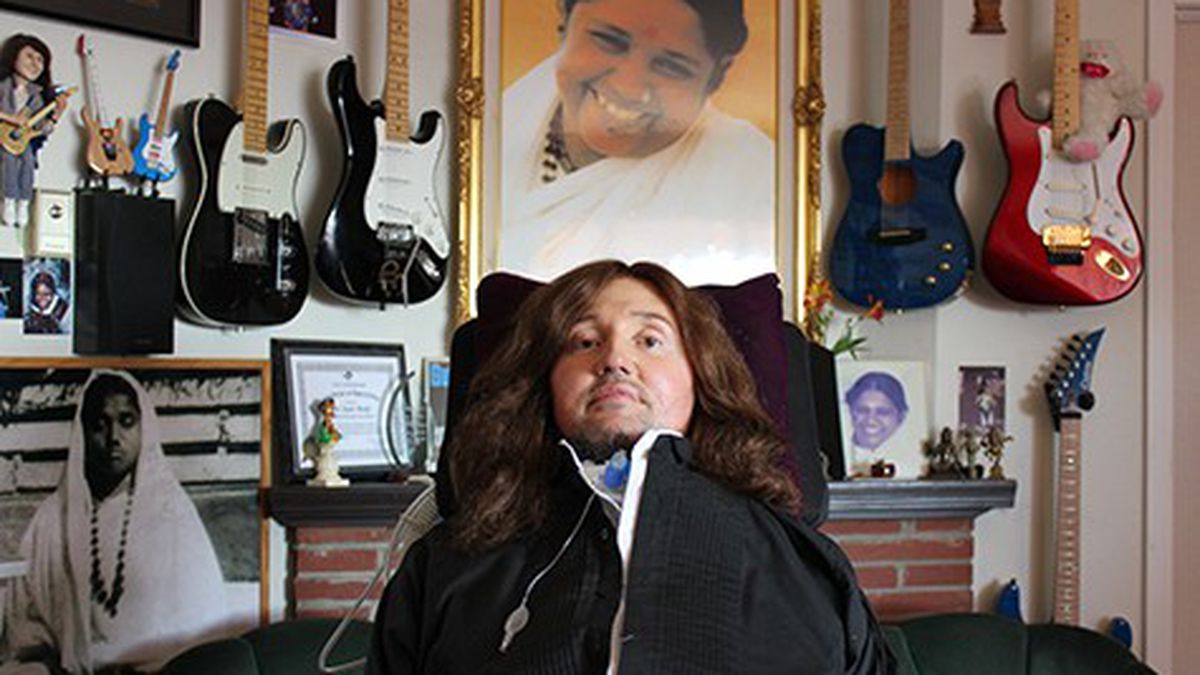 Richmond virtuoso guitarist Jason Becker was supposed to be a star. Then the unthinkable happened.

By all accounts, Jason Becker was supposed to be a star — or, at least, a very famous guitar player. The Richmond native began playing at age five. By sixth grade he was covering Bob Dylan at his school talent show, and not long after he was mastering Eric Clapton guitar solos note for note. He spent his teenage years absorbing Bach fugues and writing his own compositions, incorporating complicated classical elements. While in high school he signed a recording contract with Shrapnel Records; he ultimately finished school early to tour with his heavy metal band, Cacophony, with fellow guitar player Marty Friedman, who later went on to play with Megadeth. In the mid 1980s, while still a teenager, Becker was playing on stages in front of big crowds, his face appearing in magazines. He seemed to be on a meteoric — and unstoppable — rise to fame.

And it wasn’t just because he was a virtuoso guitarist. Becker, with his long rocker hair, was also a natural and magnetic performer who seemed to have an almost unreal control over his instrument. So when drummer Gregg Bissonette of the David Lee Roth Band called Shrapnel Records founder Mike Varney in search of a new guitarist, Varney recommended only Becker. At the time, the gig was one of the most highly coveted positions for a guitar player. Roth, of course, was most known for being the former frontman of Van Halen, one of the most successful and innovative hard-rock groups of its time, thanks largely to guitarist Eddie Van Halen. After Roth parted ways with the band, he formed his own solo group with another talented guitarist, Steve Vai. Becker would be replacing Vai, who was leaving to pursue his own solo career. After hearing his incredible playing over the phone, Roth invited Becker to audition for the band. He got the gig. For the young Becker — who wasn’t even 21 — it was a dream come true.

Simultaneously, Becker had been experiencing weakness in his leg, and it began getting worse. Just a week after joining the David Lee Roth Band, Becker went to the hospital, where he received a stunning diagnosis: Amyotrophic lateral sclerosis, otherwise known as Lou Gehrig’s disease, a progressive neurodegenerative disease that leads to complete paralysis and, eventually, death. He was given three to five years to live.

Becker managed to record one album, A Little Ain’t Enough, with Roth’s band, but his condition deteriorated rapidly. He was having trouble playing guitar. With no choice, Becker left the band and returned home to Richmond, fading from the spotlight.

But that wasn’t the end of Becker’s story. In fact, contrary to his doctor’s prognosis, Becker is still very much alive, thanks to an attendant community of family members and caretakers. Although he is almost totally paralyzed except for his eyes and some other muscles, Becker is able to communicate using eye movements in a system his father devised. Through this letter-by-letter method, he has been able to write music. In fact, he has produced six albums since his diagnosis, and a recent award-winning documentary, Jason Becker: Not Dead Yet, has eloquently captured his inspiring story. A screening — which doubles as a fundraiser for the Jason Becker Special Needs Trust and the ALS Therapy Development Institute — will happen on Thursday, September 19, at Bimbo’s 365 Club.

On the surface, Becker’s life sounds like a sob story, a story about the cruel and unfair hand that life sometimes deals us. But his is not a tale of woe but one of resilience; he’s not someone to feel sorry for but someone to emulate. His passion for music — and, indeed, for life — transcends physical boundaries. “I really wanted people to feel Jason’s resilient spirit and musical genius, but I also wanted to show that his story is really the story of many people,” filmmaker Jesse Vile wrote in an email from his home in London. “It’s the story of his family, his friends, and the selfless care [of] workers who keep him happy and healthy. It was also important that I conveyed his personality and show how someone took the lemons life gave him and made the best damn lemonade you’ve ever tasted.”

In a recent interview at his Richmond hills home, Becker said (with the help of his mother, Pat Becker) that he’s received many offers over the years to make movies about his life, and at one point there was even a Hollywood script in the works. But for various reasons, they either never materialized or he didn’t like the proposals. So when Vile initially approached Becker about the idea for his documentary, he politely declined. But Vile was persistent. At one point, he put together a trailer using footage he found on the Internet and sent it to Becker. “It was amazing,” said Becker, now 44.

Once given the green light, Vile (who’s originally from Philadelphia and has been a fan of the guitarist since he was a teenager) and a small crew made two trips to Richmond — once in November 2010 and again in March 2011. He also interviewed Vai, Bissonette, Varney, guitarist Joe Satriani, and Dave Lopez of local band Bang Data, who grew up with Becker, as well as Becker’s family and friends. One noticeable person that’s missing is Roth himself. Vile said he spoke with Roth’s manager several times, “but for whatever reason I guess he didn’t want to be involved.”

But as is made amply clear in the film, Becker’s musical life didn’t depend on Roth. After he was first diagnosed, he started “recording lots of music so I would have it down if I couldn’t play anymore.” Losing the ability to physically hold a guitar didn’t stop Becker from composing, but he said it did alter the type of music he wrote. “I guess I couldn’t rely solely on guitar,” he said. “I had to make sure the songs expressed emotion on their own, and I leaned more on orchestral instruments.”

It’s hard to fathom, but the ideas that emerge from Becker’s head are fully realized, orchestral compositions. Becker said it takes him a minimum of a couple months to write one song — which he does one note at a time with the help of his father, Gary Becker, who transcribes his ideas using a computer. Where does he get his inspiration? “Oh, various places,” Becker said. “Some from my musical influences, some just comes out of a silence or my noodle [brain] or just things from life that aren’t even in music, just feelings or emotions.” He said he listens to all kinds of music; some of his favorites are world music, Peter Gabriel, Philip Glass, Mozart, Stravinsky, and Dylan — “all kinds of crap.”

It’s clear that Becker’s music resonates with many people. His Facebook page has more than 86,000 likes, and his fans comment as much on his music as on him being an inspirational figure. Yet Becker himself doesn’t seem entirely comfortable with the title of role model. “He always makes fun of himself as being an inspiration,” said his father, chuckling. “He wants to be a great composer, but instead he’s an inspiration.”

Still, Becker’s keenly aware that his story has impacted others. He said he hopes Not Dead Yet, which premiered last year, will “make people buy my music and hopefully give some people reason to believe there is life after disease.”

Indeed. One thing that comes across in the ninety-minute documentary is not only Becker’s intact sense of humor (he introduces himself as “the sexiest man alive”) but also that he doesn’t view himself as a victim — not that his life has been easy, either. “I have my moments of sadness, for sure,” he said. “But I guess it helps that I am surrounded by great people who understand me and appreciate me. And I know God’s grace is helpful and I am still able to do fun things and communicate, joke around. Life is fun, even without moving.”

“That’s been the theme of Jason’s life,” added his father, Gary. “A lotta heaven and a lotta hell.”