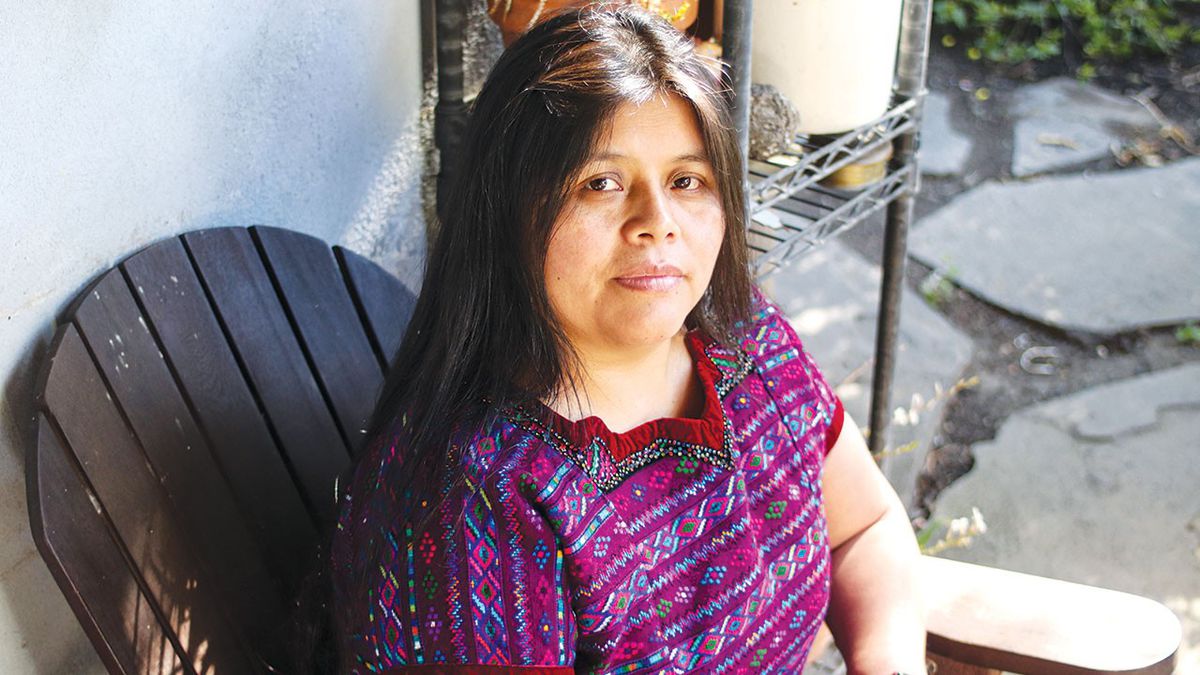 Since the start of the Covid-19 pandemic and the shelter-in-place order that followed, 22-year-old Maribel Garcia has spent much of her time weaving at her home in Oakland.

Having lost her house-cleaning job, Garcia resorted to a skill she learned as a child from her family, taking bundles of vibrant blue and green thread and layering them into elaborate textiles using the Qa Tze Te Chemj, a traditional Mayan loom. But whatever comfort she draws from her weaving does little to quiet her fears.

“I’m so scared every day,” Garcia said. “If I was sick, I wouldn’t know if it’s the virus or a regular fever. I wish there was information about the virus in my own language.”

Garcia speaks Mam, a Mayan language spoken by indigenous people in Guatemala. She lives with her brother, 25-year-old Hector, who didn’t want to reveal his real name, and two friends in a two-bedroom house in Oakland. Everyone in the house speaks Mam, and no one understands English—Hector speaks some Spanish, but not enough to understand vital information regarding the pandemic, such as virus symptoms and where to get tested.

While the whole state is under shelter-in-place orders, the language barrier keeps Mam speakers such as the Garcias more profoundly isolated than English- or Spanish-speaking families; they’re in the dark about information from state and local officials on how to stay safe, where to go for financial help and what to do if one contracts Covid-19, leaving them struggling for essential goods and services, and potentially more vulnerable to the virus itself.

“Disparities are being exponentially increased by the pandemic,” said Colette Auerswald, a physician and public health expert at UC Berkeley and UC San Francisco.

Because groups like Mam speakers tend to come from low-income immigrant communities, Auerswald said, they not only have fewer resources, they also typically have greater medical risk because they are less likely to have what they need and to know how to protect themselves.

After local shelter-in-place orders went into effect, Walter Hernandez, a 44-year-old Mam speaker from Oakland, lost his construction job and his landlord raised the rent by $300.

Hernandez, who speaks no English and very little Spanish, said he is afraid of getting kicked out of his home. Because he doesn’t know where to go to get financial help, and because he is undocumented and therefore ineligible for unemployment benefits, his daily routine now consists of visits to day-labor pick-up areas in Oakland’s Fruitvale District, which puts his wife and two kids at risk for the virus, as it does the three other Mam-speaking families they live with in their small, two-bedroom apartment.

“I’m not the only one out there [in the pick-up areas],” Hernandez said. About 20 other Mam speakers show up every day at the same spots also looking for work.

Most Mam speakers live in Oakland’s Fruitvale District, an Alameda neighborhood with one of the highest Covid-19 rates per 100,000 people, according to county data. As of June 10, there were 494 cases in the zip code area the Fruitvale District falls under.

Chris Iglesias, chief executive officer of The Unity Council, a nonprofit that serves people in the Fruitvale District, wasn’t surprised that it’s in an area with one of the highest Covid-19 case rates. He said the district is a very dense part of Oakland, where immigrant families tend to live in crowded households, making it difficult for them to isolate.

“There are multiple families living in one-bedroom apartments or studio apartments. So you already have these extreme living conditions,” Iglesias said. “Now if somebody has to work and they do get it [Covid-19], it’s easy to spread the virus quickly.”

The number of Mam speakers needing health services in Oakland has risen in the last several years, a local health care provider said, and the area has only a handful of medical interpreters.

“These individuals are the ones that fall through the cracks, and I see that every day,” said Gerardo Jeronimo Lorenzo, a Mam-speaking interpreter in Oakland who works in a local emergency room. Lorenzo serves about 10 Mam speakers every week, most of them undocumented immigrants who do not know how to navigate the public health system. That causes them to seek care only when they are “close to death or about to die,” he said.

To meet the need for information, Lorenzo recently created a video on YouTube aimed at Mam speakers, in which another medical interpreter, Amalia Pablo Pablo, translates Covid-19 information from the Centers for Disease Control and Prevention. The video has been viewed more than 15,000 times since it launched in March, although none of the Garcias have seen it.

Lorenzo said he doesn’t know how many Mam speakers will fully understand the content because their language has different dialects and some words might not mean the same thing across those dialects. The language also has no equivalent to words like “symptoms” or “hand sanitizer,” so interpreters like Lorenzo and Pablo Pablo have to go with the closest Spanish word and try to explain from there.

Lorenzo opts for video because many women who speak Mam, like Maribel Garcia, had no formal education and do not read or write their own language.

Mam speakers in other parts of the Bay Area are also resorting to desperate measures to keep afloat.

In Concord, where there are no official Mam interpreters, some Mam-speaking families rely on their young children to translate, said William Colin, program coordinator at Catholic Charities East Bay.

“Kids as young as eight are calling around trying to find help,” Colin saidd.

Translation can involve up to three people translating from English to Spanish and from Spanish to Mam. Also, the material itself is often too clinical for young interpreters to understand, resulting in inaccurate translations.

In a written response to questions about how to remedy the language barrier Mam speakers face, the California Department of Public Health said its websites offer translation tools that include “dozens of languages,” but did not address why Mam isn’t among them.

Over the last few years, Mam became more common in parts of California as a wave of new arrivals from Guatemala—fleeing poverty and violence at home—poured into the state. It’s the language of more than a half-million Guatemalans and of an estimated 10,000 to 15,000 people in the Bay Area, the vast majority of them living in Oakland, said Henry Sales, a UC Berkeley outreach worker and Mam-language consultant. A recent Oakland Unified School district report ranked Mam as the district’s third-most common language among non-English-speaking students, behind Spanish and Cantonese.

Nationwide estimates are unavailable, but the U.S. Department of Justice says Mam has been among the 10 most common languages in immigration courts since 2016.

The Garcias arrived in the U.S. from San Juan Atitlán, Guatemala, in 2018, and moved directly to Oakland, where family members already lived. Hector initially arrived on a travel visa, found a place for himself and his sister, and secured a job cutting wood on a construction site. Four months later, Maribel joined him and found work cleaning houses for $350 a week.

At the start of the outbreak, the Garcias both lost their jobs, and now they barely have enough money to cover rent and food.

As undocumented immigrants, the Garcias are forced to wait out the remainder of the shelter-in-place in a state of constant need and worry.

That’s why Maribel borrowed a backstrap loom from a friend and started weaving Klob’j, a traditional blouse, and Pasb’l, a hat worn for protection during summer, for her family. It’s an act rooted in the tradition of Mayan women.

“I feel so afraid,” Garcia said. “We don’t even know if there are people in our area that are infected or dying. That is something we’d love to get information about.”

By Ying Zhao and Daniel Roman