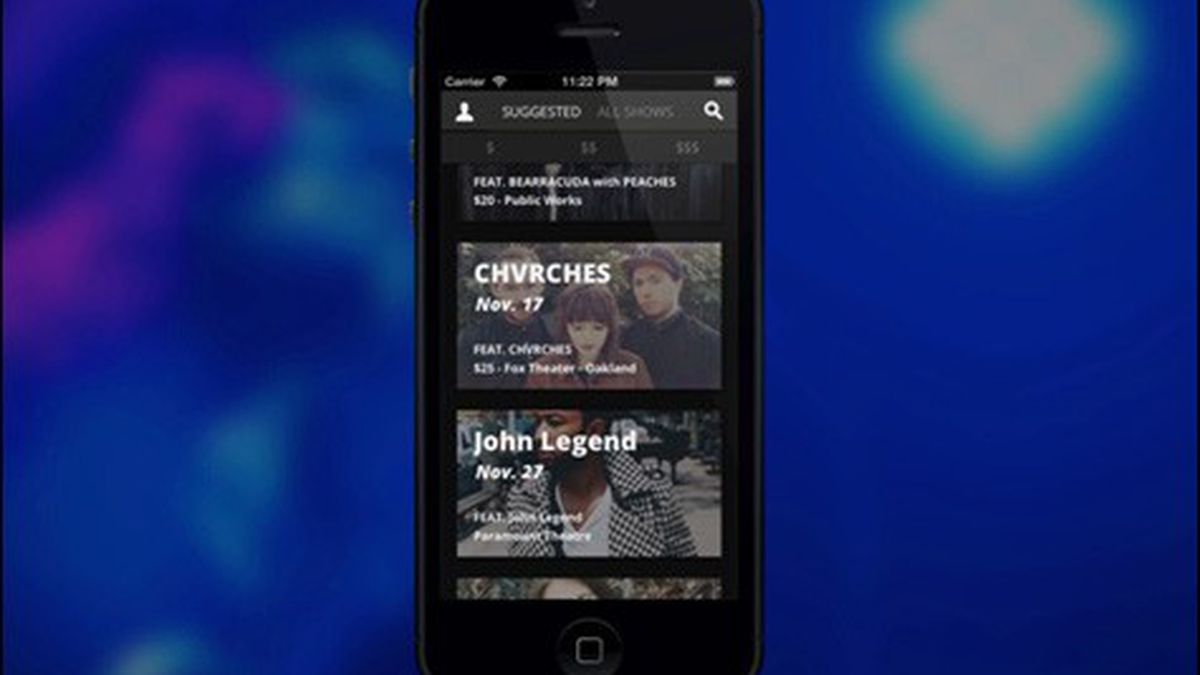 A slew of new apps aims to connect fans to live shows, but which ones are worth downloading?

Is lack of awareness really what’s preventing people from attending more concerts? That’s the premise behind a slew of live-music discovery websites and apps, which aim to get more people to more shows. But are they really changing the way people find out about shows?

The Bay Area has bred many of these apps, including DeliRadio, WillCall, and Thrillcall; the latest is Emeryville-based Tamber, an iPhone app that launched in late June and claims to be the “first suggestion engine for live music.” According to founder Alexi Robbins, Tamber differs from other concert apps like Bandsintown and Songkick in how it measures what shows someone might be interested in: It asks users to pick out their favorite artists from a list of popular musicians and then offers recommendations of similar artists who are playing nearby.

Robbins said that Tamber is “trying to do what Pandora has done for recorded music.” The idea being: If you’re a fan of these artists, you might enjoy these other shows. Tamber makes money each time a user buys a ticket through the app.

“It’s really hard to find out about shows from great artists that you aren’t necessarily thinking of or don’t know,” said Robbins. “A concert is a lot more than just who’s performing. Our goal was to be holistic, to be able to recommend artists that aren’t well known but have a great live show and cheaper tickets.”

But whether or not the artists Tamber recommends are truly great performers remains to be seen. Robbins wouldn’t reveal the app’s exact metrics, but said that if an artist “is growing quickly or on tour, that’s a strong suggestion they have a good live set.”

Brian Zisk, the founder of the semi-annual SF MusicTech Summit, said he thinks each concert discovery app has good qualities, but that none of them are far superior to the others. “I don’t think a venue is going to sell out an entire show based on one or the other,” he said. “I use them all.”

Zisk explained that the missing link among these apps is actually the social aspect of concert-going. He believes that people are most likely to attend a show if they know their friends are — and none of the apps on the market today have mastered those capabilities. “The thing that was notable to me at a great panel at [SF MusicTech] was that the current generation is thinking, ‘Oh, it’s Tuesday. What are my friends doing tonight? Oh, eighteen of them are going to see this band? Maybe I’ll go, too.’ This is where I think the future of music discovery is, on the social side, as opposed to the quality of music,” Zisk said.

I tried six of the most popular concert-discovery apps, all of which are free, and here are my thoughts:

Pros: The app is easy to use and has an attractive, elegant interface. I like being able to view all of the relevant information about a show on one page, including the distance between the venue and my location, the show’s start time and price, and a brief description about the band and a few of its songs, which are playable on the phone. The shows it suggested to me were pretty spot-on; I had read or heard about most of them, and the ones I wasn’t familiar with looked intriguing.

Cons: Tamber still has a few kinks to work out with ticketing. On the day I used the app, the price of several shows was clearly wrong (the upcoming Charli XCX concert at Slim’s was listed as $157; in reality, it’s $19). You can’t buy tickets directly in the app (Tamber makes money from directing users to outside ticket sites) and it took a ridiculously long time for pages outside the app to load.

Pros: Another Emeryville startup, DeliRadio puts an emphasis on local bands and shows. It’s easy to find local bands by genre or search your favorite local venues for upcoming shows, then stream songs by those artists. For example, instead of visiting Brick and Mortar’s website, then clicking on links to individual artists’ SoundCloud or Bandcamp pages, you can listen to music directly in the app as if you were listening to Brick and Mortar’s “radio.”

Cons: The app isn’t nearly as intuitive and easy to use as DeliRadio’s website, which is similar in feel to Spotify. (Full disclosure, the Express hosts a DeliRadio widget on its website.)

This app’s website warns: “Decision paralysis is the worst.” WillCall displays a handpicked list of upcoming shows it considers “great.” It is currently only available in New York City and San Francisco. Two weeks ago, it received $1.2 million in funding from Sean Parker, the Spotify board member and former Facebook president, and Coran Capshaw, who manages the Dave Matthews Band.

Pros: The interface is sexy. Users can read about or watch videos of the bands playing live directly in the app, then buy tickets. Most of the shows it listed were at smaller venues and featured bands I had never heard of, which makes it seem like a legitimate “concert discovery” app.

Cons: It’s a great app — if you enjoy being told what to like.

Pros: Thrillcall offers exclusive, discounted tickets to shows. It also has widespread coverage of shows in the United States, making it handy if you find yourself in another city. It streams artists’ music directly in the app.

Cons: It is difficult to navigate, has an overwhelming amount of information, and is generally not user-friendly.

Pros: Bandsintown does a little bit of everything: The app scans artists in your phone’s music library; allows you to track artists you’ve pre-selected or linked from Facebook; recommends shows; identifies similar artists; lists local shows; allows you to see if friends have RSVP’d to a show through Facebook; and lists where and when bands you like are touring.

Cons: The app recommended too many shows and the list seemed kind of random.

Songkick is one of the oldest apps in this category; it first launched as a website in 2007.

Pros: The app scans your music library (users can import artists from Pandora, Spotify, Last.fm, and Facebook) to alert you of an artist’s upcoming shows, alleviating the need to spend time selecting your favorite bands from a list.

Cons: Users must create a Songkick account. Although it maintains a long list of shows happening each night in your area, it doesn’t include any further information about the bands; you need to go online to listen to their music.

Jean Quan Needs to Learn the Words “I Don’t Know”