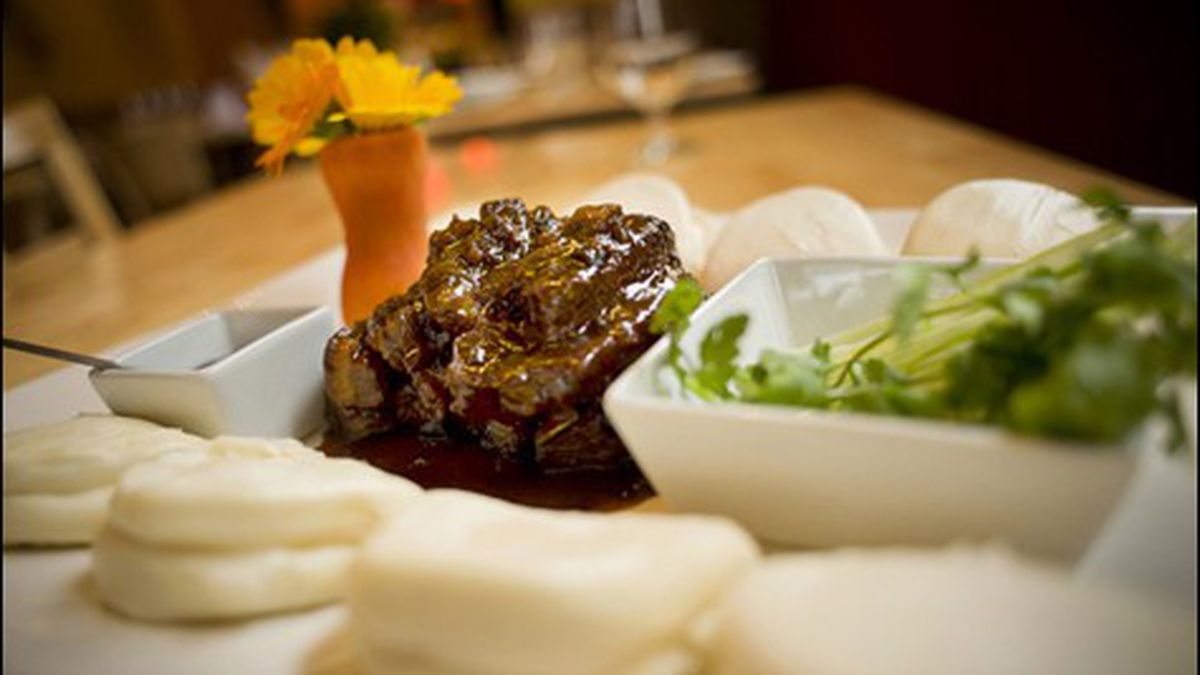 There’s a gleam of the picturesque in Marcia Lam’s culinary evolution. She’s the adult child of Chinese immigrants, a fifteen-year veteran of her parents’ greasy takeout restaurant in Hayward. Over the years, Lam grew conscious of food sourcing and health issues, absorbing the Bay Area ethos through prolonged exposure. And when she opened her own restaurant Lin Jia, just over a year ago in Oakland’s Lakeshore district, she scrapped MSG and grease in favor of mindful preparation, organic produce, and free-range meats.

This Christmas, my family trekked to a dingy Chinese dive in rural New England. Wedged between a trucker motel and a Cineplex, it boasted too-bright lights, frayed carpeting, and a dragon-and-sword design motif. We ordered classics like beef and broccoli, General Tso’s chicken, and the de rigueur gutbomb, a Pu Pu platter. While these deep-fried duck sauce vehicles weren’t without their appeal — I will never turn my back on a crab rangoon — we left feeling logy and oil-slicked.

Aesthetically, you would never mistake Lin Jia for this kind of place. With a design sense that runs toward Asian minimalist, the sharply lit interior is a study in restraint. Ceilings are tall, wooden tables are bare, and sharp geometric angles define the layout. An open kitchen helms the back, with a marble-topped dining counter running along its edge. Despite a few paper lanterns and a Buddha statue near the bathroom, it would only take a few tweaks to convert Lin Jia to a wine bar or an upscale sandwich shop. It’s a tidy, neutral space, well-suited for the food.

Lin Jia boasts a rangy menu, meandering through Asian countries on a path that mirrors Lam’s own globe-trotting. Korean fried chicken, Japanese tempura, and “street food” from Hanoi are sprinkled amongst the Cantonese noodles and Mongolian beef.

Wonton soup often seems like a salty throwaway, with pinched little dumplings and a few sad veggie pieces clumped up at the bottom. Lin Jia’s version comes from “Auntie’s” recipe (the menu is riddled with family member shout-outs), and far outshined the sum of its parts. In a rich but lightly salted stock, billowy pork dumplings shimmied like manta rays. Shiitake and carrot slices, plum-size shrimp, and wee baby bok choy eddied around in the clear broth. It’s a soup to remember.

Buddha’s curry was a stir-fried toss of tofu, snap peas, potatoes, carrots, and eggplant. Everything was cooked to al dente perfection, but the store-bought green curry was milquetoast. You know those hot pepper symbols next to spicier menu items? Don’t believe the hype.

Spicy Canton noodles were tightly wound concentric bundles of rice noodles, stir-fried to an agreeable chew with a supporting cast of veggies including bean sprouts, cabbage, celery, carrots, onions, scallions, broccoli, and a bit of jalapeño. Again, hot chili notes were all but imperceptible in the mushroom-based sauce.

Pumpkin tempura is pretty basic, cubes of kabocha squash lightly battered, salted, and quick-fried. The new anchovy and broccoli dish is essentially a huge tumble of broccoli, green onions, and kalamata olive halves, bathed in a nearly imperceptible anchovy dressing (fish bits break down during the stir fry). Wrinkled beans, a smoky Szechuan dish with garlic and chilies, was savory but again failed to deliver the promised burn.

The Lin Jia chicken requires 24 hours advance notice to order, allowing Lam to pick up a whole Mary’s bird from Berkeley Bowl. The sweet, sesame-flecked skin was crispy, the meat moist and flavorful. Considering its $20 price tag, however, I’d recommend skipping it. You can do better than chicken on a plate.

If you’re feeling flush, the $18 kou rou is a far finer choice. In the center of the dish lies a stack of crisp pork belly rectangles next to a tangle of cilantro and some green onion reeds. Ringing the plate are steamed rice buns, folded over in two. What’s going on here? It’s a DIY pork bun! The thrice-cooked (steamed, fried, braised) pork belly had a crispy/fatty mouthfeel, topped with hoisin and the aromatic greens in a pillowed bun.

The fish of the day, a whole steamed cod, came with some tableside theatrics. Our server dispassionately removed the spine with the sure hand of a surgeon, then deftly folded the fish back together as if nothing was missing. She then basted the sizzling carcass with a few spoonfuls of soy ginger garlic sauce and was gone. Fun to watch, less fun to eat: the fish was dry and tough, a curious result from a steam preparation.

Korean fried chicken, a top seller, was medium-battered and speckled with sesame seeds. I expected wings and thighs but this was a sticky heap of moist white meat tenders (paging General Tso). The marinade held notes of honey and soy, pleasant if uninspired.

After two visits, the dishes were not seared in my brain; I found myself re-visiting the menu to recall what we’d eaten. Like the stark decor, much of Lin Jia’s fare was afflicted with a studied neutrality. Instead of assaulting you with artificial and deep-fried flavors, Lam scaled it way back. Nothing garish or over-seasoned, but also (dare I say) nothing passionate? Lin Jia’s clean, expert cookery can resemble a piano concerto that’s technically proficient but soulless.

That said, you could do much worse. Service is solicitous, if occasionally aloof. Price points aren’t egregiously higher than lower-brow Chinese joints (the kou rou and the whole chicken are rare outliers). A Lin Jia staffer provides lovely garnish on many dishes, including flourishes like maple leaves and hollowed-out carrots filled with wildflowers. And though the cuisine may not commandeer your heart and mind, it also won’t linger in your digestive tract. No one likes a beef and broccoli hangover.

Jesse Hirsch
Previous articleHow Long Would It Take Mitt Romney to Make What You Make in a Year?
Next articleWednesday Must Read: OPD Must Now Report to Court Monitor; Swanson Drops Out of Senate Race
18,645FansLike
0FollowersFollow
66,479FollowersFollow