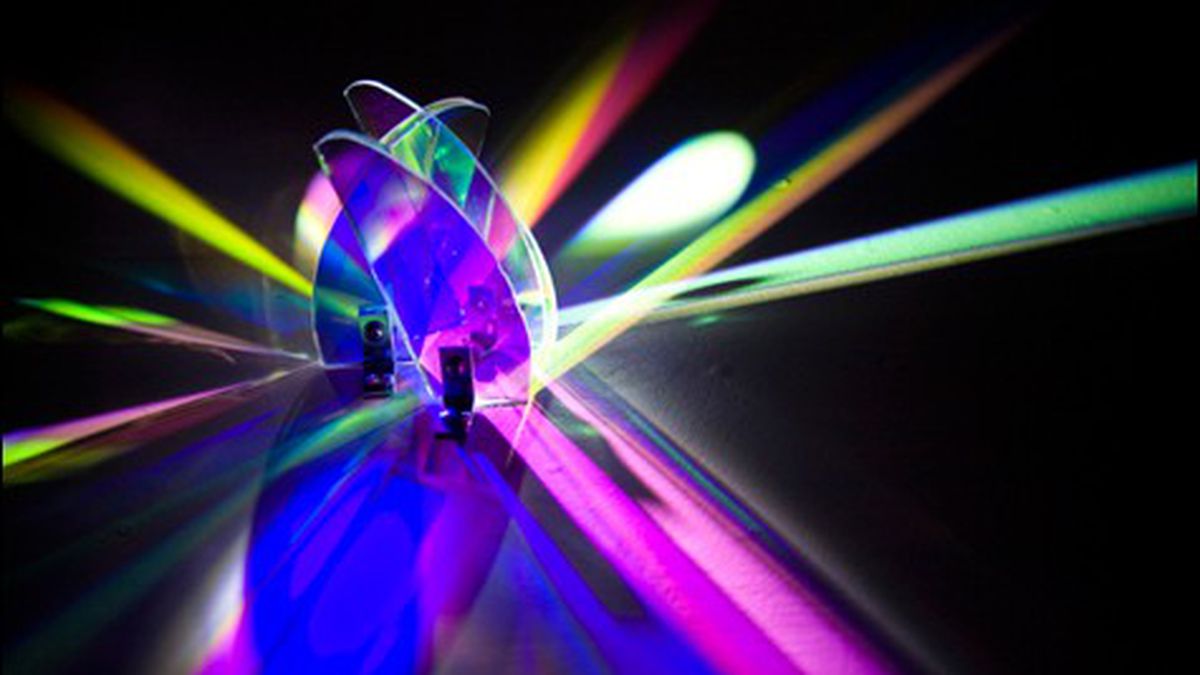 All art plays with perception. It harnesses, uproots, or otherwise toys with the way we look, listen, etc. Surely, this must be near the heart of what separates art from other attention-grabbing things in the world. Some art, however, raises the nature of perception as its very subject matter, and it is this approach that usually gets associated with the p-word.

Cathy Cunningham-Little and Amy Ho are two noteworthy perception-focused artists, both of whom deal primarily in space and light. Their sculptural and installation-based emissions, projections, reflections, and diffractions currently share the space of Chandra Cerrito Contemporary for Immaterial, easily Oakland’s most dazzling exhibition now running.

There is something distinctively philosophical about perception-focused work such as this. Yet, language often seems to just get in the way of it; delve too far into the thicket of phenomenological discourse, and one winds up laboriously riddling around something that need only be seen to become immediately apparent.

Perhaps better, then, to go the way of Cunningham-Little’s “Buzzz” and “Metamorphosis” series: literally. A collection of vivid, ethereal light sculptures consisting of color-treated glass wedges, mounted to the wall in mathematically precise arrangements and beamed with light from above, the pieces produce multi-hued, crystalline refraction patterns — imaginings of the eidetic images that the artist’s blind father claimed to conjure from his visual memory after he lost his sight.

For all their complexity of form, these are really rather simple monuments to the precious, wonderful mystery that is visual perception. This is in contrast to the more metaphorical modus operandi of Cunningham-Little’s other major piece in Immaterial, “Six Degrees of Separation,” a cluster of metallic orbs that, in reflecting the images of one another ad infinitum, exemplify their titular phenomenon.

The light sculptures also contrast with the work of co-exhibitor Amy Ho, whose light boxes and projections are not so much monuments as question marks with respect to the subject matter at hand.

Ho’s light boxes each present a photograph of a cubic space awash in variably dispersed monochromatic light — minimalist hearths of blue, yellow, red, and green. The photos are backlit by fluorescent tubes, positioned to align with the depicted light in the image. This alignment between the real and the depicted causes a kind of double vision; apparent spaces multiply: that of the sculpture, the photograph, the picture plane, and, finally, the installation room itself.

Meanwhile, Ho’s projected piece, “Up/Down II,” casts the images of two static staircases — one upon the floor (descent), one upon the wall (ascent). Standing amidst these virtual passageways, which glow ember-like in black and red, one feels as though performing on a Sartrean stage of sorts. With heavy symbolic charge, the two portals beckon and disorient the viewer, forcing her to consider whether she is coming or going and in which vertical direction — if either.

Thus, Ho presents the phenomena of light and space as the substance of two utterly basic yet multiply answerable questions: “What am I looking at?” and “Where am I?” In doing so, it is her work in this exhibition that ultimately achieves the condition of philosophy.