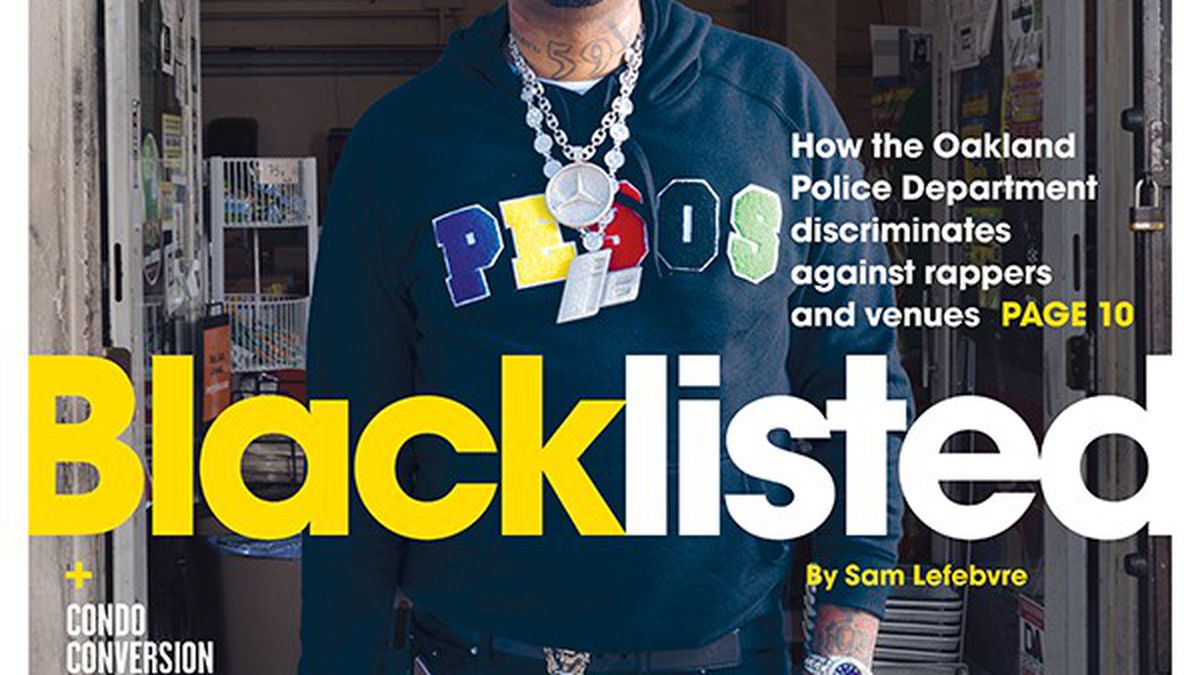 Letters of the Week: Readers Chime In On OPD’s Discrimination Against Rappers

by East Bay Express readers
May 3, 2017
“Blacklisted: How The Oakland Police Department Discriminates Against Rappers and Music Venues” by Sam Lefebvre, News, April 26:
This Is Discrimination
Why doesn’t this article address whether there is higher prevalence of violence/crimes at hip-hop shows? Is the data tainted because police unfairly target these shows, or is the data unfavorable to the article’s conceit? It seems the police are claiming their research shows these events require more security, so why isn’t this central claim investigated? Isn’t there someone who can speak to why the officers/department don’t want to comment? Only the comments provided some context as to why the police might do this besides discrimination (to what end?).

Let’s Not Ignore The Bigger Picture
It’s so easy to point at shootings that have occurred and say “We got to be safe,” but meanwhile ignore the bigger picture. What about the illegal drugs and deaths stemming from raves? What about violence at San Francisco 49er games? What about the violence at recent protests? Should we ban all forms of free speech or assembly if sometimes the outcomes are not what we’d hoped?

“Oakland Councilmembers Accuse Mayor Schaaf of ‘Bait and Switch’ With Soda Tax Revenue” by Darwin BondGraham, News, April 28:
This Is Why People Distrust Democrats
This is such a Gov. Jerry Brown, mod-Dem tactic, and Mayor Schaaf was trained by Jerry, too. When mod-Dems pull these kinds of stunts, people don’t trust Democrats. This distrust is one reason why the country wound up with No. 45 in the White House. That sugar tax advisory board needs to be set up ASAP, and not with Schaaf’s hand chosen members, which tend to undermine what the purpose of what these boards are supposed to do.

Councilmembers Knew About This
Councilmember Annie Campbell Washington wrote the measure as a tax, with the proceeds going into the general fund. She knows the general fund is general, not fenced for specific uses. She and Councilmember Rebecca Kaplan and other officials now try to shift the blame onto Mayor Libby Schaaf. This is a puppet show for those voters who drank the Kool-Aid promises of the tax.

“Condominium Conversions in Oakland Displace Renters and Undermine Affordability, According to Tenants and Housing Experts” by Darwin BondGraham, News, April 26:
Supply, Demand, and Overpopulation
For the foreseeable future, because of overpopulation, it will not be possible for working class Americans in the California Bay Area to own, or even rent, a home (as envisioned by most Americans, and as defined by Vincent J Cannato in “A Home of One’s Own,” and as was the case in the first half of the last century, before California’s population passed the tipping point).
The “housing problem” will not be “resolved,” even when we have millions living in usagi goya (“rabbit hutches”).

Berkeley’s Condo Laws Are As Bad As Oakland’s
Berkeley has a loophole in its condominium conversion ordinance that allows new high density rental housing to convert to condos as long as they do it before any units are rented. At least 90 percent of the projects approved as rentals in the past several years were never intended as rentals, and have been converted to condominiums. Most of these projects were granted a 35 percent density bonus in return for 5-10 percent below market rate rentals, but were not required to, 1) put all units, low-income and market rate, on sale to the public; and 2) increase the percentage of moderate income units available. Instead, they are being allowed to “condo” some while renting out the required below market rate units. At least Oakland isn’t that sneaky.

“Mexico’s Top Investigative Journalist Talks Trump, U.S.-Mexico Relations, and the Dangers of Reporting at UC Berkeley” by Azucena Rasilla, News, April 26:
American Journalists Don’t Understand Mexican Culture
American journalists don’t speak Spanish nor do they understand Mexican culture. So, coverage of Mexican politics and economics really does not exist. Ditto most American citizens, even those who play the tourist down south. Ditto Trump, who is nothing other than a typically monolingual American ignoramus.