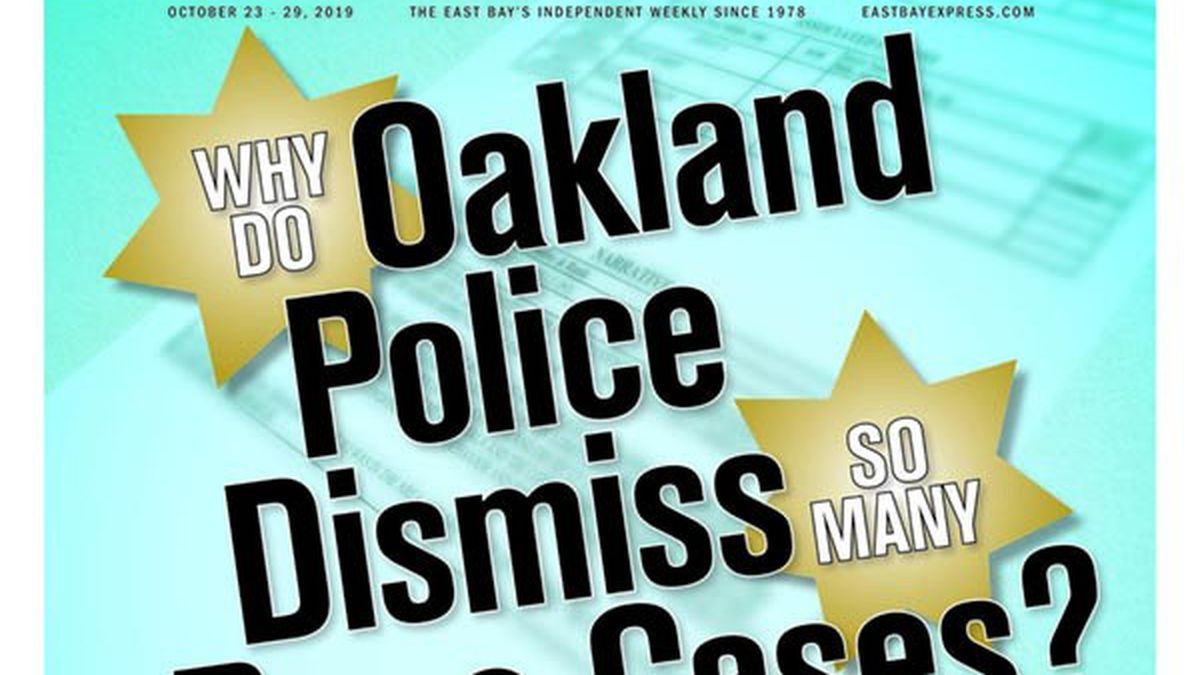 Why Do Oakland Police Dismiss So Many
Rape Cases?, Feature, Oct. 23

Maybe the Police
Can’t Do Any Better

Your article clearly outlines many reasons that ODP, with limited resources, faced with less than “enthusiastic” victim cooperation, might opt to close the case. Even the people right next to the victims acknowledge the difficulty in successfully prosecuting rape cases and a tendency for victims to “get over it” rather to live in the event.

ANY time “statistics” (simple “nose counts” most of the time) are applied as a metric in this type of thing (and yes rape IS a serious issue), playing the metric happens. But real math is a lot harder than just clicking off counts and scolding when you don’t like how they add up.

Don’t Give Away the Store

Oakland residents and sports fans endured farcical sports team owners like Lew Wolff (A’s) and Marc Davis (Raiders). The A’s should be applauded for its obvious sincere effort to keep the team in Oakland. However, that should not be confused as support for how they are steamrolling the incredibly naive and irresponsible mayor and city council. It was clear from the beginning of this process that Major League Baseball and the A’s are laser-focused on the Howard Terminal site and will do whatever necessary to get what they and their advertisers desire. At the end of the day, the best site for a new stadium from an economic and fiscal responsibility perspective is the Coliseum site. However, that site as the primary location for a new park was never seriously considered. In addition to the access and regulatory issues at Howard Terminal, workers at the Port of Oakland oppose the project. It will compromise the operation of the biggest economic engine in the City. The City is also prepared to ignore over 30 years of land use and fiscal decisions aggregating the Coliseum property for a new stadium.

This lack of leadership and incompetence at the top levels does not bode well for the ability of these people to negotiate a favorable community benefits package for the citizens. If they give away the store again (like the Raiders deal) they should all pay the price at the ballot box.

The Oakland Roots played a great soccer game at Laney College stadium. The Peralta colleges still own the stadium, and now they have a little change from renting it to a successful enterprise. (They are about to build additional library space where their temporary buildings are. Good for Laney College!)

Don’t give any property or any long term lease to the A’s, period. Raider haters for better or worse, they now think they are the only game in town. Think again.

The Tent Camps Are New

First, the Martin vs Boise ruling specified “sleeping” on public property, not “camping.” Thus, earlier this year, Berkeley began to test the ruling by actively enforcing against tent/structure camps with a new sidewalk ordinance. While the folks in the article complain about a once a week drill there, all over Berkeley everyone else must do one daily, every day. Tents are only allowed for the express purpose of sleeping, and only between 10 p.m. and 6 a.m. At all other times, each person is required to pack everything up in a volume not to exceed 3’x3’x5′ or equivalent. And, technically, that may only be placed on sidewalks for an hour or so at any given spot.

The plain fact is that anyone homeless as recent as 3 or more years ago only rarely, if ever, used a tent in town. Such “encampments” were fewer and only to be found in some outlying and obscure areas.

Where Can I Get Them?

Used to love strips back in medical only days. Then they disappeared. Where can one purchase these? I’m totally in.

Seems like Hi-Fidelity, next door and related to the awesome Amoeba Records on Telegraph in Berkeley, is the place to find these. I’m going to try them, too!

Good for you!!!. I wish you GREAT SUCCESS in your culinary journey!!