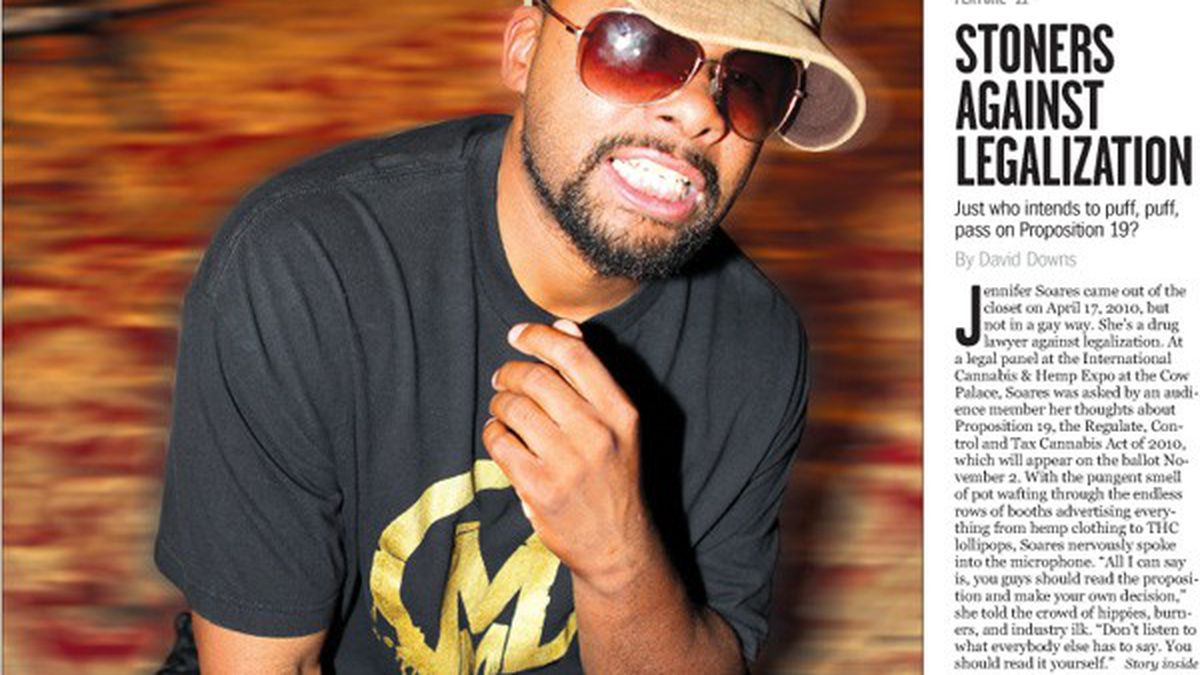 Letters for the week of September 8.

Readers sound off on guerilla knitting, Hugh Hefner, and Prop 19.

I was parked at Colusa and Solano and my three-year-old daughter piped up from her car seat, “Look Daddy, that sign has a sweater,” and it took me a while to figure out what she was talking about. Priceless.

In response to Kelly Vance’s review of the recent Hugh Hefner documentary, particularly this quote: “When Brownmiller grouses about objectifying women, Hefner gleefully admits to it.”

It sounded like it was written by a straight white man who has never been objectified (but has it coming to him). If Mr. Vance believed being a drooling geriatric with substantial memory loss buried in a pile of blondes was the epitome of living well, he was as shallow as Hefner is pathetic. Any man who has a child who allegedly despises him so much he refuses to acknowledge Hefner as his father is not admirable. For all his much vaunted success, he is a failure.

Hefner is a decrepit man on the threshold of death’s door. Did Mr. Vance know that for a person as worldly, superficial, and materialistic as Hefner, the worst moment of life draws closer with every breath? Did it cross his mind that losing this world will be losing his very essence, all that he had, has, and will ever have to Hefner? When Hefner is inevitably rendered a footnote in memory, he might as well never have been.

It is poetic irony the world’s erstwhile most infamous pimp daddy’s beloved, decadent empire is dying, disintegrating into dust and bones, perfectly in sync with the decimation of Hefner’s body. No matter how many artificial blondes pile upon it, the liver spots and saggy balls remain livers spots and saggy balls. The emperor’s just deserves are his clothes are naked, too.

If Mr. Vance would like to “gleefully” enjoy “objectification,” I suggest he wear a pair of tight shorts in the heart of West Hollywood on a Saturday night. That is, if he had the guts to grow and be treated by others as he surely has treated them.

How to Know if You’re Stoned?

I have a question in regards to the following content of your article:

Thanks for reporting on the selfish morons who use cannabis yet would vote against Prop 19. It’s amazing to think that anyone who had spent any part of their life as a de facto criminal wouldn’t welcome the reversal of the travesty that is marijuana law. Granted, Prop 19 is NOT a reversal. We are not time travelers, ‘porting back to 1937 to prevent Anslinger from gaining power, or even 1973, to force Nixon to release the actual Schaeffer Report, and let the world know that his own blue-ribbon panel affirmed the safety and sanity of cannabis use worldwide. No, we are the survivors of a multibillion-dollar drug war, who have carved out political refugee status among the educated, urbane, and forest dwellers of California.

Perhaps realizing that he couldn’t smoke himself into a freethinking dimension, Richard Lee, from the grand multimillion-dollar view of his wheelchair, has done the unthinkable, and dared to actually push for realistic change. Not dreamy stoner freedom from reality, but insightful, politically savvy, POSSIBLE change.

While I am hating on Obama for bailing out the Wall Street criminals, shit-canning single-payer, and warring in Afghanistan, I am not so trichome-blinded as to think that legalizing pot for fifteen-year-olds is a winnable proposition.

We may have truth and justice on our side, but people, we need votes! Cops vote. Republicans vote. Crusty old straight-laced geezers from Orange County vote! To stand any chance at all of passing this legislation, or any pro-cannabis legislation, in a state where the police and politicos in several counties act in outright defiance of medical marijuana LAW, having a few common sense practicalities (like no dealing to minors), is a no-brainer. Unfortunately, several of our brethren have no brains!

Read the law, people. Really, you lawyers, too. Prop 19 makes no changes to existing medical marijuana ordinances, none whatsoever. It distinctly states in sections seven and eight that whatever decisions are made by local governments, regarding sale, that Sections 11362.5 of the Health and Safety Code (Prop 215) shall remain in effect. So attorney Soares can continue her righteous (and well-paid, I’m sure) fight for SoCal dispensaries to operate, which they should. Of course, the market dynamics may change when 85 percent of medical cannabis patients are forced to decide whether to cough up the $100 bucks a year to maintain their prescription for hangnail relief, or simply admit that they like to get high, and go to a wet county, or to GROW THEIR OWN, LEGALLY! Fortunately, the patients who really need medical cannabis will have lawyers like Soares fighting for their collectives every step of the way.

Allowing cities and counties to opt out of sales is another calculated electioneering concession to right-wing NIMBYs who may not want pot in their town, but still recognize that tax revenue keeps Ahnold out of their pockets for another day. True, their local stoners may be beholden to NorCal product, but they have been for thirty years already, so what’s the diff?

Face it, Dick Nixon, an asshole from Orange County, screwed the entire country over the pot issue. If one more moron from Orange County wants to put their misguided allegiances over the freedom of every adult in the state — SCREW THEM!

As for the (too ridiculous to be believed) arguments that Prop 19 will stop weed commerce because weed will be illegal, HELLO YOU FUCKING PEOPLE! Growing pot is a federal crime, and a state crime, and it always has been. Do you think a law that makes weed almost legal is going to make all the big growers quit to become school teachers?! True, their market will shift majorly, as it has in the last few years, but believe me, the surest way to get a grower to grow is to tell him he can’t.

Equally ridiculous is the idea that Phillip Morris will come in and BREAK THE LAW to set up a major operation in an industry they haven’t a clue about, when the market is completely dominated by boutique producers and constant strain innovation.

Okay you minors, you have my sympathy, because Prop 19 is really gonna screw things up for you. When I was a boy, and weed was totally illegal, I couldn’t score until I was twelve years old! I couldn’t start dealing Humboldt nugs until I was seventeen, and I couldn’t fling pounds up and down the state for a decade because … because … oh, the memory loss is getting to me … because it was illegal! That stopped everyone I know from smoking pot. In fact, that’s why all the Bay Area cities have lowest priority enforcement laws, because pot is ILLEGAL, and they feel that enforcement of pot laws is important!

Of course, you can’t vote anyway, so it’s the idiots who think they want to do you a favor by voting against this astutely crafted terrible law that I hope will read this, because if they don’t, when you turn 21, you will still be a criminal, as you are now, or have to become a patient, even though the only thing wrong with you is that you like smoking pot.

Prop 19 is also specifically written to allow amendments that further the purpose of the act. This means that, should this act have a positive effect, we could vote to LOWER the legal age, INCREASE amounts of possession, or allow for industrial HEMP farming, which stands to be a far more important act for the survivability of the planet that arguing over who can get high.

Best Civil Rights Lawyer You May Not Have Heard Of