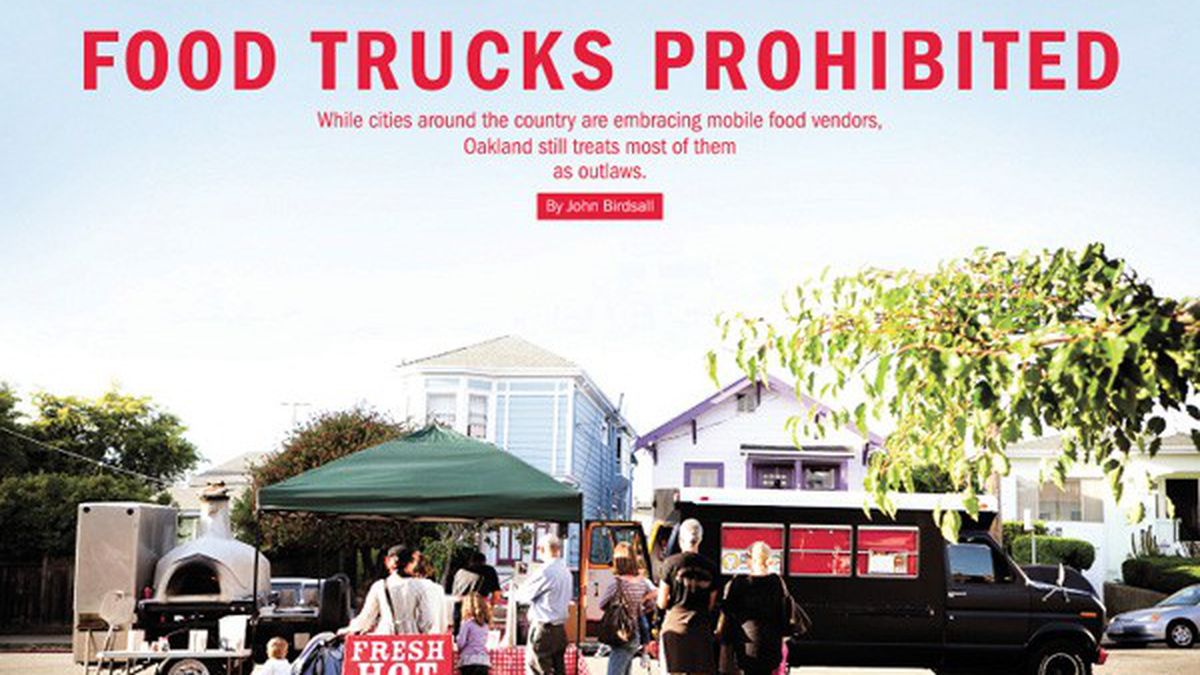 Letters for the Week of September 28

I was quoted in this article as saying the Oakland Metropolitan Chamber of Commerce and the Oakland Restaurant Association (ORA) want to have input as Oakland city staff develop updates to the city’s ten-year-old mobile food vendor policies. The author then went on to speculate, with the use of profanity, that I hold a low opinion of mobile food vendors and don’t care about the life of the city. Neither of these sentiments is true. Both the Chamber and the ORA have a long-standing and deep commitment to the quality of life in the city of Oakland, for its people and its businesses. It is unfortunate there was not a clear distinction between my comment and that of the reporter!

West Oakland needs recreational resources for community development and empowerment. I would like to see Caltrans be much more transparent in their plans and promote social responsibility, not act as a community destroyer. Financial issues will always be there. Destroying anything that comes from the heart will only cause more trouble.

Looking at the Real Liability

“The park poses a liability,” they say. Let’s compare the two scenarios:

With the skate park: Hundreds, if not thousands, of kids over the years will have a great time being able to skate. Some might litter, some might commit mayhem, but the overwhelming majority of them won’t — they’ll just skate and leave. Kids might get hurt skateboarding, as skateboarding can be a very dangerous sport, especially if you’re willing to subject yourself to possible life-threatening injury, for no other reason than to conform. As much as I disagree with this practice, knowing skaters and having been around them since the Seventies, a skater is probably the last person to be litigious, as most skaters fully accept the inherent dangers of the sport.

Without the park: The area remains much like all the other remote, dark, and isolated areas in Oakland: great places to smoke crack, crystal meth, and/or shoot up heroin. The area has a much higher chance, given the almost complete absence of people around, to inspire a whole plethora of dark and sinister — but convenient — behavior: rape, assault, murder, body-dumping, prostitution, you name it. My guess is the potential mayhem will increase, not go away. I’m no expert in statistics, but I’d have to guess that this place will be just as much, if not more, of a hotbed of liability with this skate park completely torn down than it would be with it, alive and thriving with activity.

But don’t ask me. How would I know what goes on at skate parks? I’ve only been to about fifty of them throughout California, Arizona, and even Switzerland. What would I know?

The Power of DIY

Caltrans management sees an enemy — and is simply destroying it. The homeless camps have way more drugs anyway and will repopulate that space. Where are you going to burn a car if there are people taking care of and monitoring a skate park? I am so glad I have felt the power of DIY — it’s the closest thing to freedom I have experienced as a tax-paying homeowner. The empowerment of people working together like this can be amazing. But most just complain to the city or government to do some of the things we, as real Americans, should be doing for ourselves. Frankly, the skater/builders need some of their clean-cut pals to do the homework and hobnobbing that needs to get done, so Caltrans doesn’t turn on them like an angry giant protecting its cave. Most of you will never know how good it feels to make a kid understand that it’s his or her responsibility to respect the place. A city park is just a place to poop on, to them. A DIY park is inherently more educational, homegrown, and brings people together.

If Caltrans is worried about its liability exposure, get hurt there and sue them. Then, in court, argue for a renovation of the area and transfer of ownership. They won’t want the maintenance and continued liability, so they will resist, but with the help of maybe Emeryville, the site could be given over to them as responsible owners. Might take some time, but having it tied up in court keeps it from being demolished, and although it will be “closed,” I can’t imagine chain-link fences and postings keeping boarders out. Legal action these days is the most effective way to fight the power.

Big Government in Your Backyard

Paradiso Is the Problem

Thank you for highlighting some of the problems Club Paradiso has created in the neighborhood since it opened less than two years ago. To that account I’d also like to add two details that have been reported elsewhere: the gunfight on August 27 was just the latest in a string of gun incidents surrounding the club, and, even more importantly, the club’s security actually fired several shots down the block that night.

The guards were out on the street because of a brawl that had just spilled out of the club, and theirs were likely among the eight bullets that landed in one car, as well as several others that went through apartment windows a block away, and into at least two other cars. Club management and VMA Security say no one can prove that the man they exchanged fire with had been in the club that night. But even if — as seems unlikely — the shots fired from the parking lot had nothing to do with the brawl just feet away, the guards apparently made a dangerous situation even worse by escalating it.

When your bouncer stands at the corner and fires a full clip down a residential street, it’s pretty hard to understand how you can pretend you have nothing to do with it, yet that’s exactly what Paradiso and VMA Security now maintain: that their responsibility begins and ends at the club’s front door. They would tell us that the police should worry about their patrons as they leave (or, just as often, hang out drinking), or that the owners of an unattended parking lot should. I personally don’t think the parking lot owners are responsible for policing one troublesome club’s patrons, and the Oakland Police Department has way too much to handle in the face of rising crime, budget cuts, and layoffs.Alcoholic Beverage Control has to fill the void for the safety of everyone. Liquor licenses are granted conditionally by the state, with community approval. Don’t places lose their licenses over far less than shooting up the neighborhood?

I hope the collectives fight to stay open. We need as many as the market can bear to open and stay open. If there were only a few, the DEA could shut them all down before lunch. If the number of collectives ever reaches a number that the DEA can handle, I think safe access will evaporate.

There is strength in numbers and that’s the reality until we can get federal laws in place to protect patients from the DEA and even local law enforcement.

In San Diego, I watched this issue and, as a community, I feel we should have done better than a referendum. This effort, funded by collective operators, may have missed the mark in support of the patient. It was a knee-jerk reaction to a seriously bad ordinance but the referendum also immediately closed off lawful zones in which to relocate. Before the ordinance passed, there were no zones; when the ordinance passed it created zones; and since the passage of the referendum there are again no zones.

If the DEA continues the same aggressiveness we’ve seen for years — harassing collectives to close — there will be no lawful place in which to go to start over in providing safe access to sick people. Instead of working on an effort to create more zones from the now-destroyed — albeit, poorly-designed —ordinance, we are forced to wait the required year before the San Diego city council can try again for another ordinance. During this year, safe access for the patient is in serious jeopardy if the city and the San Diego district attorney continue picking collectives off one by one.

I suggest cities take a closer look at the consequences of a referendum and what purpose it serves when a battle to open more zones in an existing ordinance might be a better use of resources.

Referendums are a great idea only for cities with true bans, not those struggling with ironing out ordinances. Why use a chainsaw when a scalpel will do?

Our September 21 theater review, “A Balancing Act,” misstated details about Tom Ross’ tenure at the Aurora Theatre Company. He’s been the company’s artistic director for six years, not nineteen. In the same story, we misquoted Ross describing the play. He said it was partly about the “existential dead-end,” not the “existential ‘and.'”