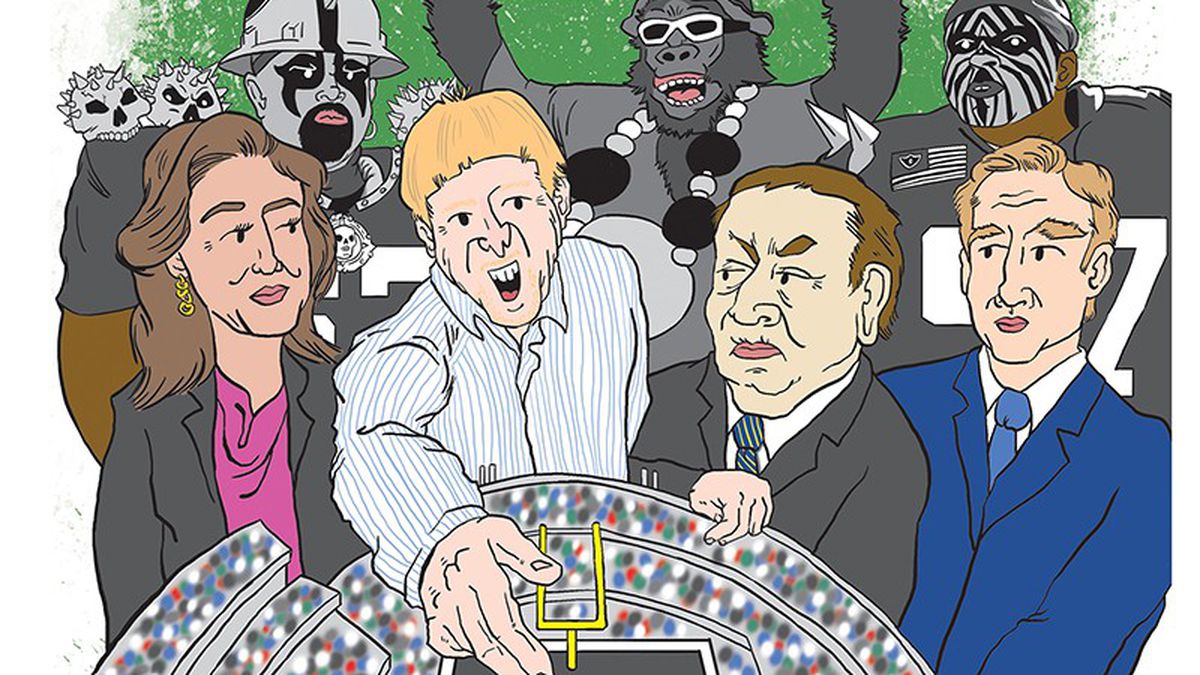 Readers sound off about the Raiders' future and police accountability.

“Just Vegas, Baby?: What Are the Odds that the Oakland Raiders Move to Sin City?” by Graham Womack, Feature Story, September 7:

What all the cities need to do is to municipalize their teams to city or fan ownership and tie the team to the city physically. The NFL is a subsidized corporate monopoly that is an anathema to democracy and manipulates the game and the fans, as if we were nothing but serfs to be profiteered. Reform the game to minimize violence and physical maiming. Green Bay is a perfect example, and the fact that municipalization has been banned by the NFL, except done deal Green Bay, speaks volumes.

It’s not Oakland or Alameda County’s fault that Mark Davis isn’t rich enough to own a football team. He should sell it to a tech billionaire ownership group, and they can easily build a new stadium. Look at what Stanford University did with just a bunch of rich alumni.

“Should Oakland Even Bother Trying to Keep the Raiders?” by Nick Miller, Editor’s Note, September 7:

Good riddance. We’re supposed to go tens or hundreds of millions of dollars in debt so an entitled douchebag can make millions by overcharging us to get into his new stadium? Eight dates a year? Puh-lease. It’d be cheaper to buy every Raiders fan in Oakland an NFL Sunday Ticket football package on cable, and let us watch the games from Las Vegas.

Ditto: No Public Money for NFL

Whether they go or stay, Oakland should not pay one cent of taxpayer money to build them a facility. Every stadium built with public money in the United States in the last seventy years has ended up costing taxpayers more than they received, and only enriched developers and sports financiers. If it’s a viable proposition, they can do it with private money. Otherwise, forget it!

I honestly want to love the development idea proposed in this essay, but it’s really nothing more than an absurd fantasy. And just as absurd is the idea of Mark Davis allowing anyone to buy a share of the team and have any influence on the ownership or direction of his franchise. But thanks for dreaming, anyway.

“Bay Area Authorities Need to Bring Celeste Guap Back to California — And Media Must Protect Her Privacy” by Nick Miller, Editor’s Note, September 2:

Hate Mail of the Week

You are evil for the sake of being evil, no more complicated than that.

Anything that’s ugly, primitive, vile, criminal, repulsive and irrational jibes with your very persona, because that’s how you have been since you were a little tyke in the progressive nursery, a little pack follower grown up to be a full-fledged scoundrel.

You are shit and garbage all the way up and all the way down, worth not a micro-second of further thought.

When I first moved to California in 1950, there were three Chinese restaurants in Berkeley, all clustered around the intersection of Shattuck and University avenues, and a terrible Italian restaurant way downtown. To find “real” food, one had to go to Chinatown (S.F., Oakland) or Japantown, or Italian North Beach. But most middle-class families rarely ate out. Mother stayed home and cooked; families entertained at home. I neglect here the many reasons why this system broke down. As it did, the barrenness of Anglo food, and the foods of the very poor, were invaded by tasteful and interesting foods, the so-called “ethnic” foods — “ethnic” being a code word for “not Anglo but we love it”.

Then, as some prospered, a nouveau riche class emerged, those who must show off to demonstrate their newfound wealth. (Old wealth never shows off; it doesn’t need to. It consumes modestly and tastefully.) So, here we are today.

Don’t blame the chefs: They just go where the money and fame are. Those palaces of weird mixtures, that Luke Tsai is constrained to review, are just show-off stations. Anyone with taste avoids them. And honest non-Anglo restaurants still exist, some cheap and some expensive.

Which brings me finally to Jonathan Gold, who is the only food reviewer ever to receive a Pulitzer. You can (and should) watch him ferreting out great food in Los Angeles’ various “ethnic” communities in the wonderful film City of Gold, which played here recently. Find it!

You can molest a young girl and not face criminal charges? They should be jailed and have to register as sex offenders.

Seriously. The second-most-reported complaint against police in the United States is rape, but you’ll never find an officer’s name on the Sex Offender Register.

I hate to say it, but bring on the feds. I don’t think this can be unraveled by any agency in the bay area.

It appears that several of the five Oakland Police Department officers to be charged were hired during former Mayor Jean Quan’s pre-election rush to add staff to OPD after she had spent years shrinking the force — because the staffing level was an issue in the approaching mayoral election. Quan pushed for “diversity” in recruitment; that was more important for her than qualification to become an officer. She lost her re-election bid, but her legacy of throwing public safety under the boat for political purposes takes its toll on us again and again.

Let’s not rewrite history. The police staffing levels were reduced by vote of the majority of the council after the 2008 economic downturn because the police officers’ union refused to consider a reduction in pay, even as other city unions were taking to keep as many of their colleagues employed as possible — even at reduced wages. It was “keep staff at reduced wages or cut staff.” The goal for everyone — including the mayor — was to bring back as many officers as possible as the economy improved. I’m not seeing a list of how long each accused officer had been working for OPD, and certainly you’re not going to blame Jean Quan for all the other officers from other agencies, are you? And are you saying diversity equals criminal behavior? That’s an ugly accusation.

“In East Oakland, a Popular Banh Mi Shop and Taqueria Closes” by Luke Tsai, What the Fork, September 6:

This place was basically my introduction to Oakland. Very sad to see it go.

The recent employee lawsuits against the restaurants Calavera and Burma Superstar illustrate a major failing on the part of the Department of Labor in Oakland: Workers should not be forced to file class-action lawsuits in order to receive compensation after alleged wage theft.

Since entering the service industry in Oakland last spring, two restaurants stole tips from me, and a third tried to pay me less than minimum wage. When I went to the Department of Labor, I quickly learned why so many employers steal in this city. In Oakland, people that suffer wage theft are expected to file a claim, conduct their own investigation against their employers, supply evidence, find witnesses among their co-workers willing to testify against their bosses, meet with the bosses to discuss the accusations, and, finally, when the employers continue to deny that they committed a crime, take them to court.

Service workers are not qualified to conduct criminal investigations. It is usually not worth going through this process for a paycheck. Going to court is also expensive.

Restaurant owners have money to hire expensive attorneys. This is why we only hear about class-action lawsuits against restaurants. Individuals cannot afford to recover their stolen wages.

The Department of Labor in Oakland should conduct its own investigations into claims of wage theft. It works that way in New York, and it can work here. That way, workers can immediately get back to work supporting themselves and their families.

Trib Columnist Just Doesn’t Get It