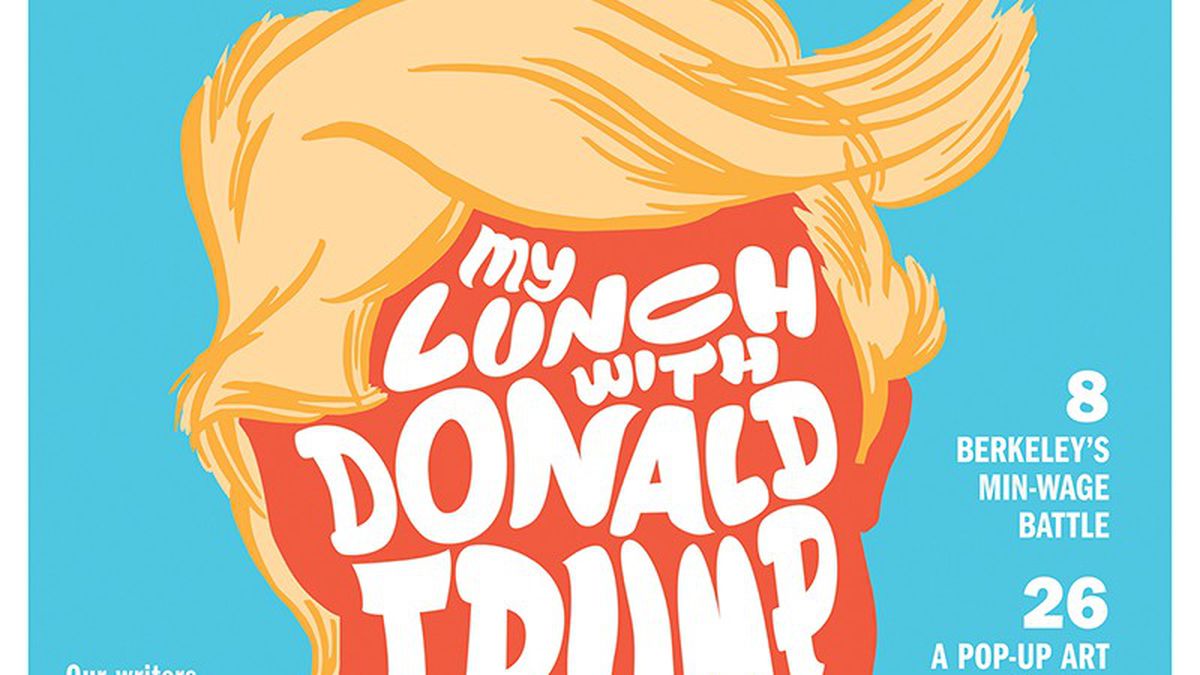 “My Lunch with Donald Trump,” Feature Story,
May 4

Thanks for nothing, Miller

Nick Miller’s lunch with Trump? Whether or not one supports Trump’s candidacy, Miller’s lengthy screed — mistitled as having lunch with the man — was as uninformative as anything ever written about him. Miller made no bones about being fervently opposed to Trump, even noting that he wore a black hoodie to the event, probably to make visible his oppositional stance to everyone present.

Miller’s position is clearly revealed when he suddenly drops the statement (at the bottom of the third page): “Ridicule aside, the Trumpsters I met … were by no means stupid. These women were articulate, armed with data and examples, and they launched them with vitality, and even good humor,” but immediately dismissed that observation by proclaiming that “they’re wildly misinformed.”

Thanks for nothing, Miller. If you felt the need to attend the event and then write this article, you’d have done better to have it be printed as an op-ed, rather than presented as a journalistic report.

The extreme reaction to Donald Trump by supposed progressives is both hilarious and infuriating. If you are really progressive, you should realize that Trump would be a substantially lesser evil than Ted Cruz, Marco Rubio, or any other Tea Bagger, religion-pusher, or even establishment Republican. The main reason that the Republican establishment hates Trump is that he’s not conservative enough, and they’ve said so publicly. Yes, Trump is obnoxious and grossly egotistical; does not speak or act with the maturity, diplomacy, or restraint required of an elected official; makes openly racist and sexist comments (as opposed to the coded racism and sexism of the rest of the party), etc. But Trump also opposes hideous trade policies like NAFTA and the TPP, has publicly maintained that the Iraq War was a bad move that destabilized the entire region, and has said that he’d much rather do business with Russia than fight it. These are much better positions than those taken by other Republicans on these huge and very important issues.

People on the left who are so freaked out about Trump should quit obsessing on superficialities and focus on the real issues. … If you’re actually progressive, the least of evils of the Republicans who tried to get the nomination is clearly Trump.

This writer sees nothing but his own limited narcissism. Trump has completely upset and unraveled the Democrats, progressives, Socialists and Communists, all Hillary Clinton and Bernie Sanders supporters. He is bringing to the Republican Party a new wave of members. These are the ordinary Americans that have been left behind by the Socialists that run the Democratic Party. Sure, there are goofy things going on with Trump. But there are worse things going on with President Barack Obama, Hillary and Sanders.

“Two Minimum Wages to Appear on Berkeley Ballot,” News, May 4

Thank you for your coverage of Berkeley’s efforts to lift up its workers to $15 an hour. Berkeley is one of the few cities in the country to support a $15 minimum wage. The measure that Berkeley City Council passed would indeed be one of the fastest wage schedules in the entire nation for all its adult workers. Approximately ten cities have passed a $15 wage schedule, and almost half get to $15 slower than the City of Berkeley will. For David Fielder to claim that Berkeley is lagging behind and that the Berkeley City Council is lying is disingenuous at best. In fact, Berkeley would be above Oakland’s 2019 minimum wage by approximately $1.50 and would be $3 above the state’s new minimum wage. …

Councilmember Laurie Capitelli did the right thing in coming up with a compromise and valuing everyone’s work equally. As a result, Berkeley City Council voted on an amended wage schedule that would get all workers to $15 one year earlier. I hope that the people of Berkeley will see Capitelli’s consensus-building proposal for what it is–a way in which to lift up our low-wage workers.

Writing as a labor organizer in Berkeley, I was delighted to read the well balanced article by Darwin BondGraham on the Berkeley minimum-wage issue. I don’t think that many voters realize how conservative the majority of the Berkeley City Council members are. They repeatedly claim that small business cannot afford a substantial hike in wages for the city’s poverty wage workforce. Yet in San Francisco and Emeryville, minimum hourly wages will climb to $15 an hour in 2018. In fact, prior to the election of Tom Bates as mayor, Berkeley enacted a living-wage ordinance that applies to employees who work in businesses that are on city property. Their wages exceed $15 an hour.

Clearly, the legislative bodies in San Francisco and Emeryville do not listen only to the Chamber of Commerce. They are also interested in what the public thinks. But that is not the case in Berkeley. Although Berkeley enjoys a reputation as a very liberal city, the lack of empathy by the current electeds for low-wage workers, and working people general, is extraordinary.

Funny how all of the older “activists” in Berkeley never mention anything about the inequality of the property taxes being levied on ridiculously appreciated legacy homes due to Proposition 13. That is quite a privilege, yet there is nary a mention of it. Most would find that rather hypocritical, and it would be interesting to watch a local initiative try to recoup some of that so we could all observe this hypocrisy out in the open.

In Benicia, Environmental Science Associates has been a disaster.This is because ESA has provided very suspect legal cover for a pro-Valero council member who wanted to approve the Crude By Rail project despite heavy public opposition, both from Benicians and others up and down the rails. In particular, attorney Brad Hogin has crafted a unique legal theory to say Benicia has no choice but to approve Valero’s Crude By Rail project, because of “indirect” pre-emption. Under his theory, local land use authority is irrelevant, because if there is an even remote connection to the railroads, the authority to deny is pre-empted by federal regulation. Of course, dozens of other lawyers, including Attorney General Kamala Harris, have said this is not supported by law. Unfortunately, the “Valero 3” — Council Members Alan Schwartzman, Mark Hughes and Christina Strawbridge — have shown their true loyalties lie with Valero and not the people of Benicia by voting for a ludicrous 11th hour request from Valero to seek a declaratory order from the federal Surface Transportation Board, which has nothing to do with local land use authority if it does not involve rail companies. Hey Oaktown, beware of ESA!

One wonders whether the sudden urge to ship coal through Oakland is more about using coal shipping to reclassify the Port to serve some other political interest.

“Cars are sexy, and fun to drive.” Not if you’re stuck in traffic, as drivers are increasingly everywhere around the Bay Area. Alternative-power cars really are not “the answer.” Just a glimpse at the whys: Cars are fundamentally wasteful economically — even cars that are driven 15,000 or 20,000 miles a year sit unused 90 percent of the time. That is a very poor use of resources for a society. That’s why things like Uber work — people on average have much more car than they need. Much, if not most, of the pollution from a car comes from making it rather than driving it. …

Alternative-power cars, sorry. It’s the familiar corporate-supplied technological fix for everything that ails us. The automobile-dependent society is the corporate dream of the 1940s and 1950s. We’re stuck in a vision that’s more than half-a-century old.

Should I get rid of my bed, too?

“[E]ven cars that are driven 15,000 to 20,000 miles a year sit unused 90 percent of the time.” They don’t do any harm and are not inefficient when they stay unused. My bed is unused about 75 percent of the time, too. Should I do as in The Jungle by Upton Sinclair and rent the same mattress to multiple people working different shifts, to be “efficient,” by your formula?

On the City of Oakland’s proposed soda tax:

I want to discuss the idea of an Oakland soda tax. Food is a basic necessity for survival, but for some food is a comfort, an addiction and even their silent killer. The fast-food industry is taking over America with its extreme portion sizes, cheap options and easy access. These bad eating habits are influencing the way our youth gets nutrition. According to the Centers for Disease Control and Prevention, childhood obesity has more than doubled in children and quadrupled in adolescents in the past 30 years. In 2012, more than one third of children and adolescents were overweight or obese.

Specifically in the Bay Area, where I was born and raised, nearly half of the kids in Oakland and Richmond fall into the category of overweight or obese.

It is our responsibility as adults to make sure the children of our community are being given proper nutrition and access to healthy activities.

I am from the city of Berkeley, and currently there is a soda tax, which took effect this March. The soda tax is still very new, and there isn’t any clear data to prove the tax is working yet, but there is a tax on cigarettes which is another health issue affecting many Americans. The CDC has stated that more than half of smokers are low income. There are many articles that show a significant decrease in the number of cigarettes bought and consumed every time the tax increases.

Since there is evidence that a tax can cause a decrease in consumption due to socioeconomic factors, I believe a soda tax being implemented in Oakland can help decrease the childhood obesity rate in this city. Oakland is being targeted by fast-food chains and soda companies. There is a fast-food chain in every corner, giving out large sodas cheaper than water bottles being sold in many drug stores. This is unacceptable. The children of these cities are falling victim to this target marketing, and it is having serious consequences on their health. If a soda tax is placed, then hopefully the prices will be too much of a financial burden that it will allow people to think twice about purchasing soda or other sugary beverages. This tax can have the potential to truly help our youth.

If we pass the soda tax in Oakland, we can take the first step in implementing change. Think about the children, and think about the future, the next time you order a soda at a fast-food restaurant. Together, we can fight against the silent killer known as sugary beverages and fast food.