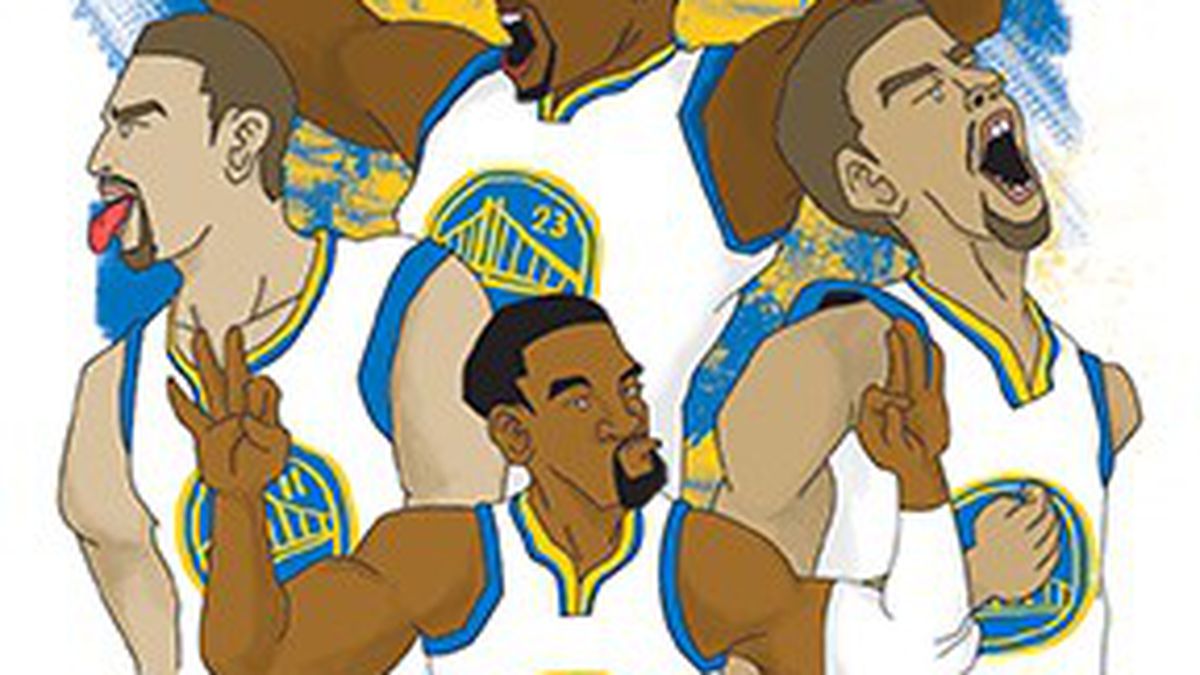 Readers sound off on the Warriors, eucalyptus trees, and police technology.

The Warriors Belong in Oakland

The San Francisco 49ers are the best example available of an owner and his ego driving the team quickly toward mediocrity. By insisting that they must be in Silicon Valley, where the Big Money lives, at all cost, they have lost their home field advantage and alienated both their historic fans and the community around the new venue. The Warriors absolutely belong in Oakland. The fans in Oakland have paid the price with fanatical support, despite forty years between championships. Now is certainly not the time to move. The Oracle is the best home court in the NBA. The players know it, the owners know it, and now the national media knows it.

Adam Silvers’ greedy babble was all about the corporate elite flying in for the NBA finals and having the same experience they get when they fly into Dallas for the Super Bowl at Jerry Jones Stadium. You do not need all of that to have a great arena packed with loyal, loud, devoted fans every night. That’s like building a retail outlet and buying enough land to adequately park customers for the Christmas sales. Those spaces are unused for about 350 days a year. Not a wise approach. I am also a longtime sports fan who truly believes in mojo.

The Raiders enjoyed twenty years of winning, sellouts, and some of the greatest games in NFL football history at the Coliseum. They then decided in 1982 that they could make more money in Los Angeles and moved the team. That did not work out and they came back. It did not work out because the Los Angeles Coliseum is so big that it is a neutral site at best. The LA fans are also a fickle bunch who show up for the hot games, but week to week, they do other things. Lastly, USC is the number one football team in LA and that is not changing anytime soon.

You will notice that since the Raiders returned in 1995, they have lost their home field mojo and have yet to reclaim it. Most of the so-called “big games” they have had at home since 1995, they have lost. Back in the day, on a gray Sunday morning in the fall, knowing the sun will shine around 12:30 p.m., as a Raiders fan, you could taste and feel the anticipation and energy of great football in the air. That is no longer the case. Perhaps they can get it back, but the Warriors should not make that mistake. They will never have the energy of the Oracle in San Francisco.

The Players Know It, Too

And let’s not forget that Klay Thompson and Steph Curry each gave a shout out to Oakland and Lake Merritt: Thompson pointed to the apartment building across the lake where he lived as a rookie and Curry said he also lived by the lake and used to walk around unnoticed. Harrison Barnes said he still lives in Oakland. Most of the Warriors reside in the East Bay.

Maybe the most important comment came from Finals MVP Andre Iguodala, who said it was the fan support for the team at games at Oracle Arena during the 2013 playoffs when he played for Denver that made him want to join the Warriors (that and playing alongside Curry, who he noted at the time was “more popular than God”).

The crowd at the victory celebration was diverse and reflective of the fans at Oracle — Asian, Latino, Black, white, young, and old — rabid fans who make superstars like Iguodala want to be here (in Oakland). That will be lost in ‘Frisco. The Warriors’ ownership really should reconsider the move to The City and stay in The Town.

As daily hikers in the East Bay, we have certainly noticed the increase in planes flying straight down the ridge of the East Bay hills over Tilden, Sibley, and Redwood parks. Dozens per hour, so low you can read the writing on the sides. Really disturbs the peace. Thanks for the article.

We Need a
Compromise

Thanks for the article. I really appreciate the depth of coverage. I live in Bolinas, where we experience jets flying over all day, every day. My two-year-old daughter notices them every time they fly over. Some are higher, some are lower as they converge onto the SFO landing pattern. When it’s quiet, the sound of the jets is more obvious, making it more of a disturbance. It’s astonishing that the FAA doesn’t even analyze impacts in places with a low baseline [of noise] since these are the places where the impact is perceived to be greatest. I always wondered why they didn’t move the flight path farther west over the ocean. Now it makes sense: It’s restricted military airspace and I have witnessed military aircrafts doing exercises there. Great things happen when people work together. I hope these agencies ditch their egos for the betterment of themselves and others.

Would You Rather Drive?

The FAA does have rules that require best noise reduction practices. The jets have to take off into the wind. However, did you ever notice, for example, that at SFO they take off at first in a steep climb, but then throttle down and turn as they overfly populated areas? There is no perfect path. Do you want planes or do you want to drive to Atlanta?

Thanks for the Well-Researched Story

As a longtime resident of the Santa Cruz Mountains, I see much anger and frustration up here over the FAA’s NextGEN implementation for SFO.

Mountain living is a trade-off in lifestyle: We give up the conveniences and excitement of city life and accept long commutes in return for peace, quiet, and experiencing wildlife rarely seen in urban areas. The FAA is taking these from us. In the time it has taken to write this, six jets have flipped on their air brakes 2,500 feet above me.

Your article brings to light that animal communication and even survival are likely impacts, even beyond human enjoyment of the open spaces and parks. All to save the airlines a few million dollars in gas money.

Thanks again for the well-researched story, we are in this fight for the long haul.

How About Solving Crimes?

OPD needs to focus on solving the crimes they already know about. Then those criminals will go to jail, where they will be unable to commit new crimes. Voila! Less crime to “predict”! A very small number of people is responsible for most of the crime in Oakland. That is true everywhere.

That Oakland and its mayor would even consider this hocus pocus is clear evidence of how ignorant our police department and our elected officials are about crime. Wow! Hey, Schaaf! Human behavior cannot be put into a mathematical “box.” You have been watching too much science fiction. This is pre-crime; it only works in the imagination. Get busy with the things that we know that work and expand them with that $100,000 plus.

OPD Can’t Even Use Nixle

OPD can’t even figure out how to consistently and effectively use Nixle, which by all accounts is a rather straightforward affair. Thus, I’m at a loss as to how they might consistently and effectively use something like this, which is more complex and probably more expensive. Even more distressing is how quickly the “popo” and our illustrious mayor (little miss privilege) seem to latch onto anything that feels good in the moment. Then again, one could argue that in the end, we’re getting what we deserve. SMH.

How About Community Policing?

As a longtime Oakland resident, I completely disagree with using this type of technology. It will most likely target neighborhoods that are primarily minority. If there is no proven science, I would prefer to use the money toward proven tactics.

What we really need is what we have been promised for so long: Real community policing. Officers that know the people they are paid to protect. Community policing itself could also lead to a reduction is crime by increased presence of the police in the community.

I also wonder just how connected OPD officers are to Oakland? How many grew up here and/or live here? Do their ranks mirror the community they serve?

On another note, Mayor Schaaf has not shown so far that she has the capacity to understand the community she was voted to represent. With the more recent example where she called for banning night street protests, which I understand was in violation of a court order! I fear we are headed down the same failed mayorship road that Jean Quan took us down. It was a bumpy road for the community. It’s time for someone to make contact with the community face to face to solve the problems.

What is missing in the “thinning-only” statements is that a thinned blue gum eucalyptus stand won’t stay that way. It denses back up.

That’s the reason for targeted removal of some stands around or in the wind direction of vulnerable hillside homes. Also, big euc re-sprouts need to be prevented and the area can be replanted with lower-fuel, indigenous native oak, redwood, willow, or native bunchgrass stands. There will always be big blue gum in the hills, but if FEMA won’t fund hazardous euc removal and native re-vegetation on the edges of Oakland, EB Parks, and UC wildlands, then we all should be concerned.

Kudos, Sophie Ho, for an excellent article. The first I have read on this complicated issue that gets everything right — all the facts, all the different positions of the groups. And, she doesn’t take sides. Refreshing!

Why Keep Any Eucalyptus?

Eucalyptus trees: the pigeons of the Oakland/Berkeley Hills. Why anyone would miss them — and the incredible danger they, and their detritus, pose — is beyond me.

Removing the Mural Was Too Much

The mural controversy will keep me away. It could have and should have been saved. No worries, there are plenty of hipsters in the area not concerned with our history. I will continue to go to Sparky’s, Barney’s, and Fentons if I want a burger, as, on the whole, there are no shortages of eateries on Piedmont Avenue.

That Mural Was Art

Hey, Luke Tsai, did you ever see the mural? I have lived in the Piedmont Avenue area for thirty years, and the mural painted by Rocky Rische-Baird, in the same style as his other mural on the Gaylord’s building on 41st Street, was both visually impressive and a wonderful historical record for Oakland. There are many people in the neighborhood who are more than a little amazed by the arrogance of the new tenant who took it into his own hands to rip down a distinguished piece of local historical art without bothering to consult properly with representatives of the area. I would normally welcome a new restaurant with some well-prepared offerings, but in this case, all I have is a bad taste in my mouth. Some sort of public apology and good-faith offer to try and make up for what is clearly an egregious error would go a long way to fixing the rift that exists. All I have seen so far from the owner is defensive comments about how he did all he reasonably could have, which has not served him well in the eyes of the neighborhood.

Most Happening Gallery: Hippest enclave of outcasts and misfits