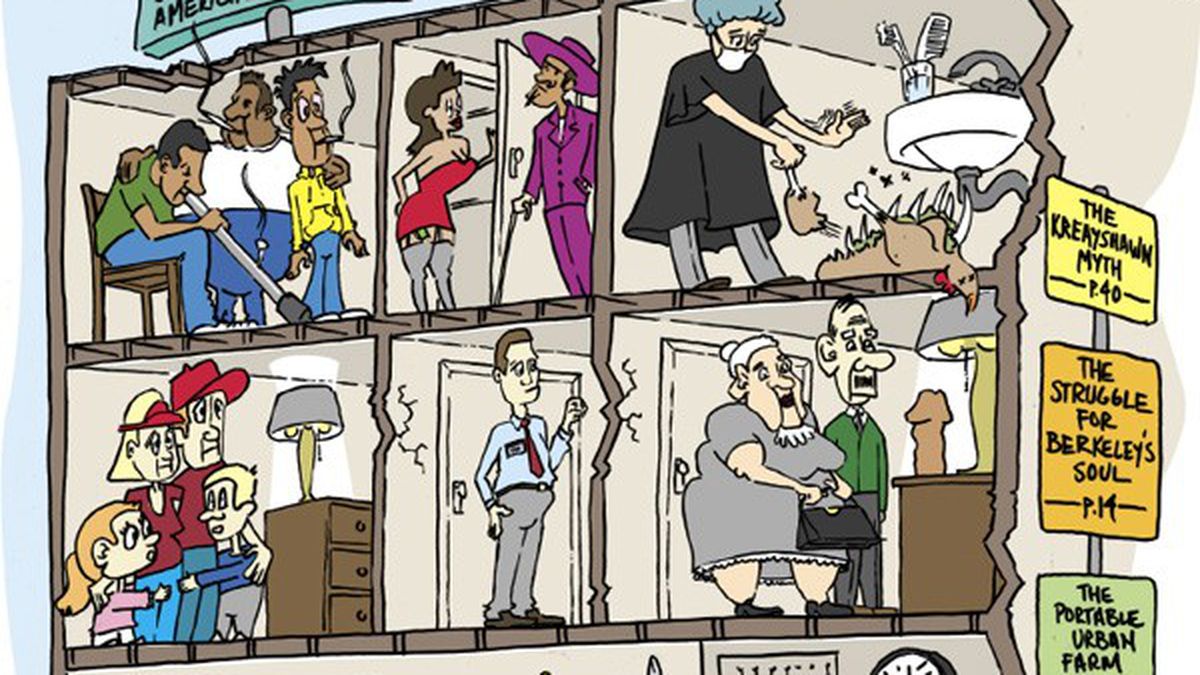 Letters for the Week of July 13

Readers Sound Off on Kreayshawn, Farmers' Markets, and Pyramid Brewery.

Funny stuff! Almost convinced me to give the Jack London Inn a try. Looking forward to more great writing from Mr. Jones!

The Amazon tax is welcome, but it’s too little, too late for many small local booksellers. Now the Evil Empire of retail has decided that cutting off its nose to spite its face really is a viable strategy, and plans to end its relationship with its California “affiliates.” Let’s see what Amazon does once all fifty states make the logical decision to tax online purchases.

Lauryn Hill grew up in a middle-class, mostly Jewish suburb in New Jersey, yet people don’t criticize her for being fake and inauthentic. Ice Cube went to college in Arizona yet he hasn’t had his ghetto pass revoked. It seems white rappers, the few worth talking about at least, always have to prove their ‘hood credentials. Who cares? It’s about the music. If most gangsta rappers did a fraction of the stuff they boast about they would be psychopaths. We all know this but we prefer the fantasy. I doubt any beloved black rap artist’s rep would survive the kind of scrutiny you are applying to these girls.

Slow Doesn’t Have to Mean Snobby

You have a skewed view of what Slow Food is. We are not a bunch of yuppie foodies stuffing our craws with foie gras and scoffing at those who don’t (your article perpetuating said unfair stereotype aside). Slow Food USA is working very hard to help create a food system that is good, clean, and fair. By “good,” we mean that it is good-tasting, good for you, and good for the planet. By “clean,” we mean that there is nothing in the food that isn’t food (and yes, if it wasn’t food 100 years ago, it still isn’t food), and by fair we mean both that it should be priced fairly and that the people who produce the food should be justly compensated for their efforts. Nothing snobby about that.

John Birdsall is totally aware of the fine work by Slow Food USA. In fact, he included some of it in his story. But I cut it at the last minute for space reasons.

We’re Working On It

Thank you for your review of Berlyn’s. We are always trying to improve our food and the execution of our menu, seeing how we are only nine weeks into it. Reviews like yours helps small local eateries like Berlyn’s notice flaws we need to fix, and as a new business that’s trying its best to source organic produce and use natural meats, there are always flaws in doing something new.

We have a long ways to go and I’m sure most new restaurants are not at 100 percent nine weeks after their grand opening. Lake Chalet, which is about two miles from Berlyn’s and has a million-dollar budget, couldn’t get peoples’ lunch orders out on time for six months.

I hope one day you could write an article about the lack of support for small eateries like Berlyn’s when sourcing organic produce and using natural meats without jacking up the prices. If you and I had talked about Berlyn’s maybe you could have included some of that in your article, but Robert Gammon, co-editor, would have just cut anyway for space reasons.

Between this article and the “A Rosé is Still a Rosé” article, I think we can all agree you should stop reviewing anything to do with alcohol.

No one seems to be hipster enough for you.

Worst beer review ever. How about telling us what the beers tasted like instead of what they didn’t? You must not actually enjoy drinking beer since you’re trying to discourage anyone from wanting to try Pyramid’s brews.

With all due respect, you are wrong. Pyramid makes great beer, and you forgot to even mention the friendly, knowledgeable staff. I don’t know where you were when you wrote this “review,” because it must not have been Pyramid.

[Piedmont Recreational Facilities Organization president and spokeswoman] Jessica Berg says all the impacts have been studied and “no stone has been left unturned” — yet somehow, as [Piedmont City Administrator] Geoff Grote admits, the Piedmont City Council has certified an environmental impact report that doesn’t have a traffic plan! What we have here a public process co-opted by private interests and a clear failure of due diligence.

What’s With the Prices?

I started to shop at the farmers’ market few years back but stopped supporting it. For some reason, I feel like the concept itself is amazing but cannot understand how a local apple costs more at the farmers’ market than at the chain grocery store. Something simply does not seem right with the high prices you pay at the farmers’ market. Who truly benefits? I wonder. People want to do right and we feel good by supporting the farmer’s market idea, but again, I honestly feel there are some untold stories behind the whole thing. Food for thought.

As an avid reader of the Express I was very disheartened to see an article published with such low journalistic rigor. There were several misjudgments and misconstructions, all of which portrayed farmers’ market associations negatively.

Several Oakland entrepreneurs quoted in the article mentioned that they were invited to sell at certain farmers’ markets but declined to participate because it wasn’t the market they desired most. What wasn’t mentioned was how many vendors at popular markets stuck it out in lean times when the market was created but not as popular with shoppers. Through perseverance in those lean times they survived to enjoy seniority once the markets became the vibrant but coveted centers of commerce described. Asking those business owners who survive off the income from these markets to “just pack up and leave” simply because someone who lives ten or twenty miles closer has a right to be here is preposterous. That notion contradicts most definitions of fairness.

I encourage those who feel left out to become the pioneers that entrepreneurs are known to be and become involved in a slower market which has the space to accommodate them. Rather than chastise farmers’ markets for not providing enough, it seems much more prudent to explore how to increase the availability of venues such as these and create more access to local entrepreneurs in order to grow our local economy even more. Most complaints listed in the article were from individuals who essentially wanted to be a part of the action. Unfortunately the author portrayed markets as being a burden overall. Instead it sounds like they are merely too successful for their own good. Seems like there simply aren’t enough farmers’ markets to go around.

At Urban Village, we believe very deeply in cultivating and maintaining quality relationships. This includes relationships with all stakeholders: vendors, customers, brick-and-mortar merchants, city officials, health departments, agricultural commissioners, etc. We do this because it’s the right thing to do. This pursuit tends to result in the most equitable outcome but it can be very difficult to make everyone happy. Often, the needs of these various stakeholders are competing, and managers must very carefully craft solutions that are respectful of all involved but don’t necessarily give everyone what they want. It makes it much more difficult when those involved are not receptive to this reality and fail to offer any flexibility in reaching a solution. However, this is definitely the minority.

For every merchant who thinks a market has a negative impact, there are literally hundreds of local residents who love shopping there. The products offered for sale are generally not available in grocery stores. Oakland in particular is known for lacking access to fresh fruits and vegetables, the foundation of a healthy diet. In addition, the environmental impact of consuming those products is generally much lower than that of alternatives.

However, a farmers’ market is not an opposing force to local merchants either. As stated in the article, many farmers’ markets are created at the request of city governments or merchant associations as an effort to stimulate the local economy. For instance, in Sunnyvale, a street improvement project caused the Urban Village market there to move away from the downtown shopping corridor to the Cal-Train parking lot a block away. Most of the vendors in the farmers’ market preferred the large parking lot with ample space and access to the narrow street around the corner. It was only one block away, but during the fifteen months of relocation, brick-and-mortar merchants experienced a plummet in sales and 95 percent of them begged for the market to return. At the disappointment of our vendors, Urban Village returned in April to the downtown corridor and the merchants began tripling their volume (or more) on Saturdays. We saw the needs of the merchants who hosted our market in their community as outweighing the needs presented by our vendors.

Local independent journalism is supposed to enhance community relations. Sometimes this means identifying problems or misbehavers in order to initiate dialogue and resolution. However, it should not stifle those relations by misconstruing the issue. While there happens to be certain undesirable consequences of holding these events, ultimately I feel the article failed to underscore a very basic idea: The people who suffer from the impact a market has on a neighborhood are greatly outnumbered by the people who benefit. It is unfortunate that the author presented readers with an argument that is held by such a minority of residents and ran it as a feature article. I hope that equal visibility will be given to responses such as this.

In our July 6 Legalization Nation column, we incorrectly reported Leafly.com‘s traffic figures. The site receives about 180,000 visitors a month. Also in that issue’s music story, “The Humble Life of Phillip Greenlief,” we misspelled the name of one of Greenlief’s musical groups. It’s Citta di Vitti. And in the other music story, “Wobble Radio,” we incorrectly identified Aaron Axelsen of Live 105. He is the music director. In the Local Licks column, we misidentified the lead singer of Ghost & the City. It is Ash Maynor.

Calm Before the Storm

Where to Eat on New Year’s