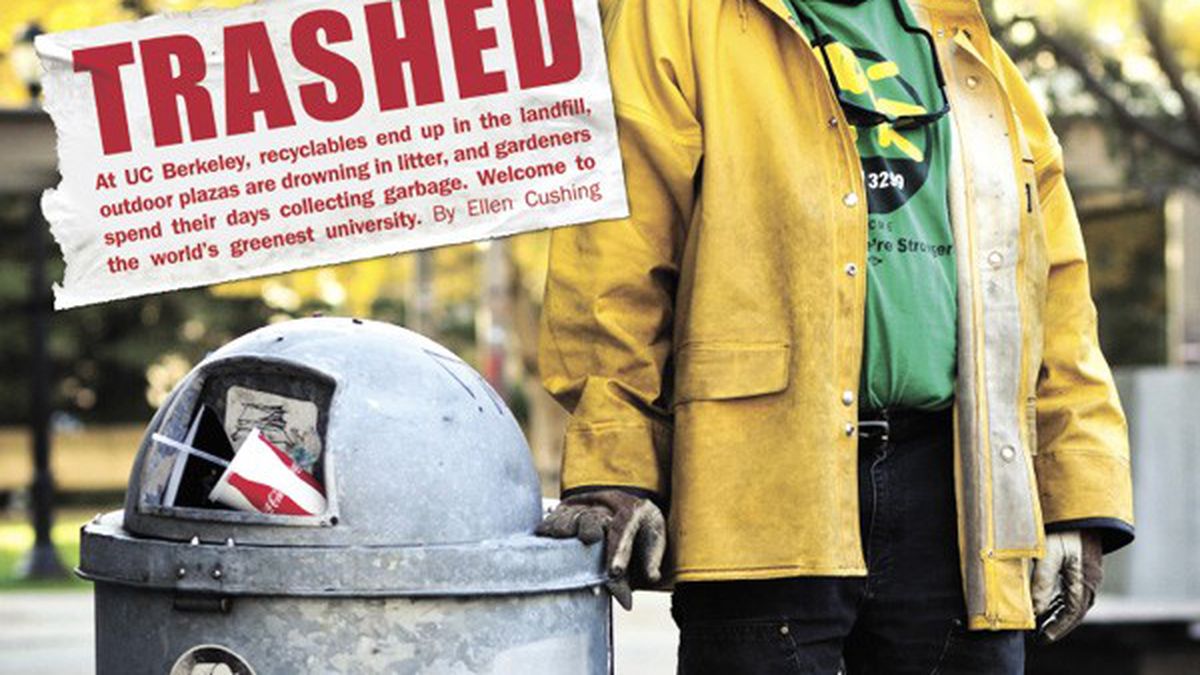 Readers sound off on trash at Cal and the lack of medical cannabis for the sick and dying.

Berkeley Behind the Curve

A very good overview of the problems on campus with recycling. The university is five to seven years behind the curve on industry-standard, up-to-speed programs, and public spaces cannot work unless there are good systems and constant attention. There seem to be funds for high-paid administrators but not grunts working hard. The containers on campus are a true hodge-podge, thrown together by the unthinking, and poorly maintained both in concept and execution. Pity the poor Hank Chapots of the place who are compelled to tidy up after poorly trained students at the height (in their life cycle) of indifference to their effect on others and the planet. Not all, but it doesn’t take many to make a mess keep coming.

Although I think recycling programs have come a long way in educating people about landfills, we’re still far from an ideal situation.

Unfortunately, much, if not most recycling does end up in the landfills anyway for the reasons you cite. That’s true across the country, not just on the UC Berkeley campus. Even my own neighbors cannot seem to avoid putting plastic bags and other non-recyclable plastics into our recycling bins. Huge signs, small signs, private notes, conversations — it doesn’t change anything. I think we are so trained to toss stuff away that no amount of education will help.

In addition to looking into solar-powered trash compactors — which can compact the garbage to a fifth of its original size — the university ought to invest in educating students about the realities of waste management and how recycling is fairly limited. The truth is almost everything is wrapped in plastic (which was not true 25 years ago, when I was a freshman) and it’s very hard to avoid. It’s getting worse every day. Just try to buy a piece of fruit without a plastic fruit sticker — it’s impossible except at the farmer’s market (and now that’s changing)! The emphasis should be on designing new packaging or going back to the old ways. Also, students could try to use reusable water bottles and coffee cups to help it along.

You nailed it with the comment at the end about the new contract with Pepsi. Plastic is supported by powerful lobbies. Try not to use plastic for one day. Or try not to buy food in plastic at the store. If we all refuse to buy plastic, we may be able to make a difference.

What About Producer Responsibility?

This story provides an obvious argument for producer responsibility. Off-campus food providers should pay a fee for every disposable they sell, and those funds should cover disposal, education, collection, and diversion costs. Sustainability provisions should be written into every contract with food providers on campus so that take-aways are in recyclable packaging only and discounts are given for students bringing their own travel cups and to-go ware. Somebody’s got to take the lead. Reduce waste in the first place, and establish an effective diversion effort in the second place. Mixing both trash and recycling and then “sorting” it again is ineffective and misleading.

An Issue Elsewhere as Well

The classification of cannabis as “a drug with a high potential for abuse with no accepted medical use and unsafe for use under medical supervision” — the most heinous class of illegal drug there is — is unexplainable, except for an eighty-year history. And how can good clinical studies be done on an herb that is illegal for medical use? Obviously, no doctor who is anxious to see how this controversy works out is likely to write medical marijuana prescriptions — there are doctors who do “that sort of thing.”

If only families of the elderly knew more about the well-established medical benefits of marijuana, and that there are ways of using the herb other than smoking. There are so many cancer patients and malnourished elderly people who could benefit so much from medical marijuana, but access is rare.

Even here in Canada, where criminal penalties for possession of cannabis are hardly ever applied, medical marijuana use is legal but very uncommon. Now that regulations have changed and private dispensaries are opening up, that may change, but still, most doctors would not prescribe marijuana because of their fear of professional censure. The doctors that will prescribe it charge privately — $500 per visit or so — and the regular reimbursement is about $35 from medical plan, with no co-pay from patient. So most doctors see them as unprofessional.

In our December 21 New Year’s Eve preview, “Best Ways to Ring in the New Year,” we incorrectly stated that Countdown is happening at Alameda County Fairgrounds. The location was changed to Tulare County Fairgrounds (215 Martin Luther King, Jr. Ave., Tulare) after press time.

In the same issue’s music story, “How to Be the Main Attrakionz,” we misspelled Mondre M.A.N.’s legal first name. It’s Damondre.

In our December 14 feature, “Trashed,” we misstated the year UC Berkeley installed solar panels atop its student center. It was 2003.