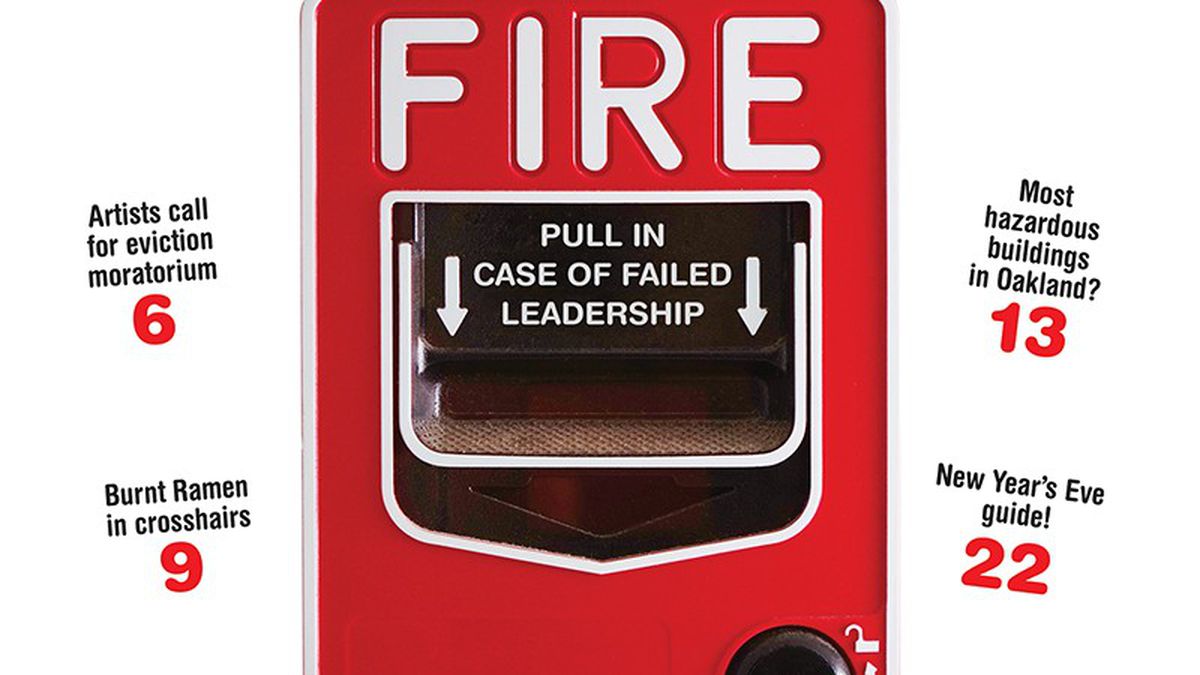 Readers sound off about Ghost Ship.

“Oakland Firefighters Say Their Department Is So Badly Managed, Ghost Ship Warehouse Wasn’t Even In Its Inspection Database” by Darwin BondGraham, News, December 7:

Can’t Have It
Both Ways

Once again the Express wants to have it both ways. You have all these articles about landlords evicting (or possibly evicting) artist-tenants from warehouses in the wake of the Ghost Ship fire. But then, on your cover, you have a provocative attack on city government for “failed leadership.” Apparently, you wish Oakland had been more proactive in investigating warehouses. At the same time, you want the city to leave the warehouses alone so the artists can have a place to live. Which is it?

Thank you for your accurate and fair reporting on the Ghost Ship fire. I was a Telegraph Avenue street vendor for over twenty years, and back in the day it was easy for me not only to make a living and pay for my basic essentials such as rent, food, and utilities, I was also able to complete post graduate courses at UC Berkeley, as well as my activist work.

Nowadays, just the first and last months rent, as well as the security deposit, is as much as a good used car. What would be a great tribute to the 36 that died in the fire is to: Drop all charges against the warehouse owner, with the stipulation that she sells the property to the city for $1, and the city of Oakland build a beautiful live-work space in the spot.

“Stop Blaming Artists and Musicians for the Ghost Ship Fire. Blame People In Power Who Screwed Up.” by Nick Miller, Editor’s Note, December 6:

While I share the sadness due to the deaths from the Ghost Ship fire, my concern going forward is that the authorities do not start a witch hunt, against the underground scene, as Nick Miller put it. People attending these shows and parties are fully aware that they are dangerous. The vast majority of the time nothing happens, but you realize that you might not live through it if it does.

In the early 1980s, we used to go to underground punk rock shows at a place called the Tool & Die on Valencia Street in San Francisco. The shows were in a basement, and the only way out was up a narrow and very rickety staircase. While at shows there, I constantly thought that, if there were a fire, we were all dead, and everyone I’ve mentioned this to in the years and decades afterward told me that they thought the same thing. But we attended shows there, anyway, because there were no rules, so we could watch punk bands and do what we wanted without the hassles of a formal club.

The point is that having and attending shows at places like these is our choice, and is also necessary for the underground scene to continue. Advocating for fire or other building code enforcement at underground shows will eliminate those shows by eliminating their venues. (What might happen if we’re lucky would be that the venues would constantly move in order to stay a step ahead of the law.) You can’t have your cake and eat it too. Having an underground scene also means having the dangers that come with it, which in some cases mean unsafe spaces. A place doesn’t necessarily need to be a fire trap in order to host underground shows and parties, but many of them are because bringing them up to code is financially prohibitive for someone putting on underground events. If those people have to spend what it takes to, for example, install a sprinkler system, the place will charge more money and there will be no underground scene there.

Moreover, a call to enforce building codes will give the cops and fire departments an excuse to raid these places and shut them down. People in authority such as cops and firefighters, even in the most progressive cities, do not like underground scenes because they can’t control them and see them as chaos and anarchy (not that there’s anything wrong with anarchy!). So, I urge the East Bay Express and everyone else who wants the underground scene to continue to refrain from calling for building-code enforcement for places that host the scene.

None of this is to say that hosting the underground scene is an excuse to needlessly put people’s lives or safety in danger. Of course everyone running these places should do what they can to make the places as safe as possible. But prioritizing safety over the existence of underground places will be the end of these places. So please, take a deep breath and leave the underground venues and their scene alone.

Facebook
Twitter
Previous articleWhere to Buy a Cake for Your Upcoming Holiday Party
Next articleBurnt Ramen Pushes Back Against City of Richmond
18,632FansLike
0FollowersFollow
67,429FollowersFollow