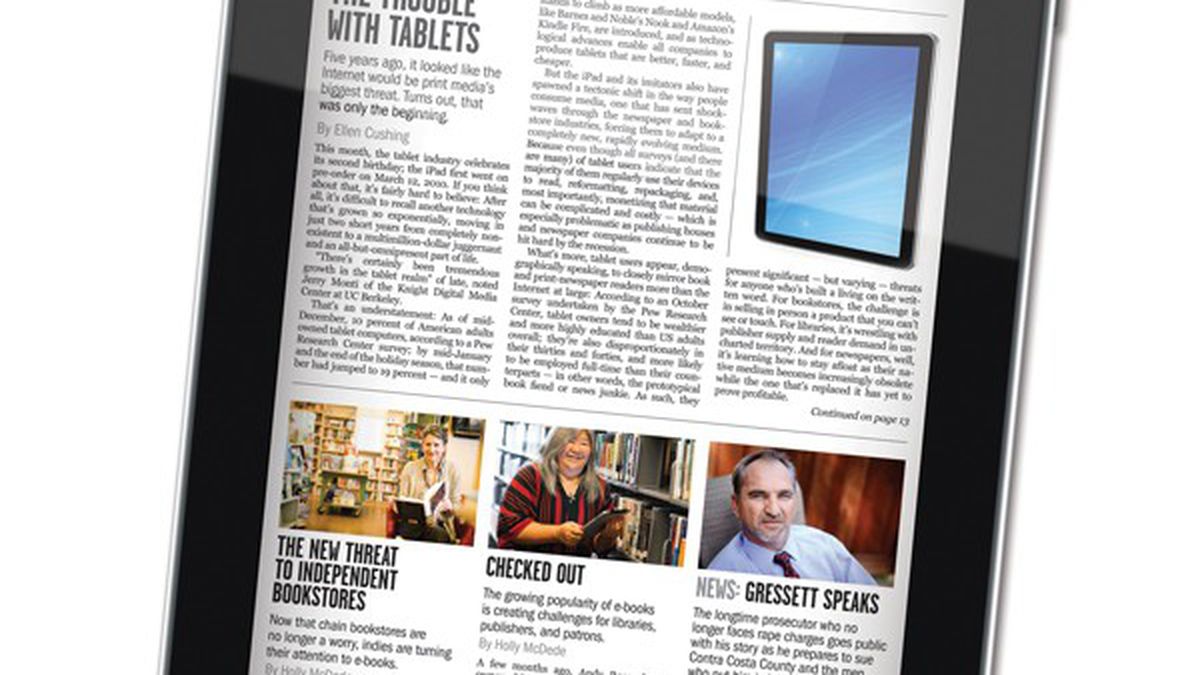 Tear the Lid Off

Good to see you’ve got your crack investigative team on the case of this new “e-book” phenomenon. Next up: kids today and their mobile phones, what’s up with that?

I suppose Amazon counts as “e-book sales” the fifteen free classic titles (Moby-Dick, Great Expectations, etc.) I downloaded to my Kindle. But they don’t get any revenue from them. It would be interesting to see how many of their downloaded books are actually freebies.

“The Trouble with Tablets,” Feature 3/21

Here’s the thing about print media. Before the iPad, I would gladly pay three or four dollars for a magazine to read while on the airplane. Same goes for newspapers — fifty cents for a weekday newspaper to read over coffee, no big deal. Theoretically the bulk of the newsstand price of these publications are going to the vendor as well as to transportation and to the cost of paper and printing costs. The advertisements were what paid for the actual content.

Now that I have an iPad and there are no delivery costs or printing costs, and no newsstand that needs to make money, then why should I have to pay the same, if not more, to get it delivered to an electronic device?

I can get all of my news for free on the iPad. I do subscribe to The Daily on the iPad and I feel that 99 cents per week is fair for a neatly organized virtual newspaper — but fifteen dollars per month for an online newspaper is way too much. Also, why should I pay the same amount for a digital magazine when the publisher has no printing/delivery/distribution costs? If the publishers lowered the cost of these newspapers and magazines they would sell ten times as many, therefore creating tenfold the ad revenue, and wouldn’t have to pay Apple as much to distribute it.
As it stands, only die-hard readers are willing to pay the same for the downloadable content as they would for it in print, especially with Google News, CNN.com, and other free online news sources readily available. Cut the price in half and I’d bet that you would double your subscriptions at least.

We wanted to write and congratulate you on your wonderful article — it’s a long overdue look into the inequities found in the Bay Area casting of women. We are Symmetry Theatre Company (founded three years ago in Berkeley) and our mission is somewhat different than the companies that you mention in the article. We seek to “balance the boards,” particularly for women who choose to make acting a career and have joined Actors’ Equity Association (AEA). AEA men in the Bay Area enjoy an astounding 80/20 ratio in the winning of these precious union contracts — and because of that number, many women who are as or more skilled than their male counterparts are forced to consider leaving the union or the area simply to practice their craft — or, in many cases, considering another career altogether. These women are not hobbyists, but professionals, and many have trained for years in some of the best programs in the country to acquire the skills necessary to compete and sustain themselves at the highest level of the industry. The hiring practices are so skewed, however, that Bay Area producers are often able to find talented non-union women — women who by all rights should be union members, and who will work for half to three-quarters of what it would cost to hire union actors — to fill the larger women’s roles, while smaller men’s roles often go to male union actors. Symmetry seeks to redress the unfairness of these hiring practices by making sure that there are never more male than female actors in our productions, and that there are never more male than female AEA contracts on our stage. We’re sorry that our company was overlooked for your article because we are focused solely on those women who have chosen acting as a profession and whose voices are clearly not being heard in this community.

Jay Youngdahl is the classic Bay Area progressive, always finding justifications for killers. Many of these people come to the Bay Area to become “Veterans for Peace” — yeah, right!

It’s way past time for the US to get out of Afghanistan, Germany, Korea, Japan, Italy, Africa, Colombia, Honduras, and more than a hundred other countries where it’s installed military bases. Ron Paul is the only presidential candidate that proposes this, and he’s not doing that well in the polls.

Each time that an incident happens — like the recent killing of sixteen villagers in Afghanistan, allegedly by a single soldier — we see Barack Obama, Hillary Clinton, Leon Panetta, and others offering the band-aid of “We sincerely apologize.” Hypocrisy flies high .

These killings take place every day in Afghanistan, Pakistan, Yemen, Somalia, and other places, either by troops or drones. In Vietnam, it was the My Lai Massacre, and many more that went unreported. Then come the media’s sycophants — including the “progressives” like Jay Youngdahl — to provide the absolution for the murderers by blaming it on PTSD, poverty, or some other lame excuse. The truth is that if these war criminals hadn’t joined the armed forces they’d be in US jails; their incentive to join was to be able to kill people in other countries with impunity.

There was the case of the village of Haditha in Iraq: Seven soldiers were accused of the killing of civilians. They were gradually released, acquitted, discharged, or demoted, but not a single one was sentenced to jail time. It’s a long history of crimes.

The Tax Isn’t a Panacea

I guarantee that this tax increase will result in far less revenue than anticipated. People making $2 million or more a year won’t have any trouble establishing residency in another state, and thereby avoiding the tax. It will also cause many more businesses to leave the state and cause the loss of many jobs.

Hello, Occupy. There is a simple and elegant solution to the problem of filming and livestreaming Occupy actions: Just don’t do anything violent.

It is a widely-known fact that the actual Occupy Movement is specifically, deliberately, and strictly a nonviolent movement, with the only officially-sanctioned actions being the ones that are guaranteed under the Constitution.

So it would seem to me that anyone complaining about being filmed doing anything that is not within their constitutional rights should not be quoted as though they are speaking for the movement.

We may well be dealing with even more of the same old infiltration that we have had to deal with all along.

There are three types of people: leaders, intellectuals, and sheep. The leaders always want to get the intellectuals out of the way to lead the sheep. That is why in totalitarian states they go after the artists, musicians, and teachers. That is why Rick Santorum uses the epithet college-educated “snobs.” Because the artists and intellectuals are the ones that know how to think, the leaders do their best to get rid of them.

During the social upheavals of the Sixties, it was music that provided the soundtrack and led the way. It frightened the powers that be enough to pass the Telecommunications Act in 1996, killing any possibility of independent radio. The Grammys and ASCAP are part of this effort to keep music under corporate control, to keep us from thinking. Just the fact that ASCAP has no intention of opening its accounting books and showing us where the money is going says it all — if we think.

I’m sorry, but I still don’t know what folks are referring to as violence being committed by Occupy Oakland. The few broken windows back on Nov. 2? The only “property destruction” at an OO action since then was tearing down a fence on January 28 to escape OPD’s kettling and tear-gassing, and the burning of the City Hall flag while OPD was busy arresting close to 400 people they had trapped in front of the YMCA.

The endless obsession with marketing for some imagined TV audience is what derails this debate. Yes, nonviolence makes good PR when white students get beat and pepper-sprayed, but then what? Lt. John Pike’s still free. UC Berkeley police are now bringing felony charges against students (and a professor) for the events of November 9. There simply is no evidence that nonviolence has been “more successful” than the alternative. (And how would we gauge success, anyways? Hopefully not by how the mainstream media portrays us!)

Those who support a diversity of tactics are not against nonviolence — far from it. We are a diverse community with lots of skills and strategies for different contexts. We know that nonviolence doesn’t equal passivity. We’re not idiots. We’ve all learned from this debate (note how on January 28 the Black Bloc and others worked to protect the march by creating diversions and blocking the police). Please respect those of us who, even if are personally invested in nonviolence, resist claims of moral superiority and remain opposed to the idea that we should limit our resources for the sake of PR.

In our March 28 Taste story, “Ten Desserts for the Budget-Conscious,” we neglected to mention the co-owner of Flavor Brigade. It is Justin Mruskovic.