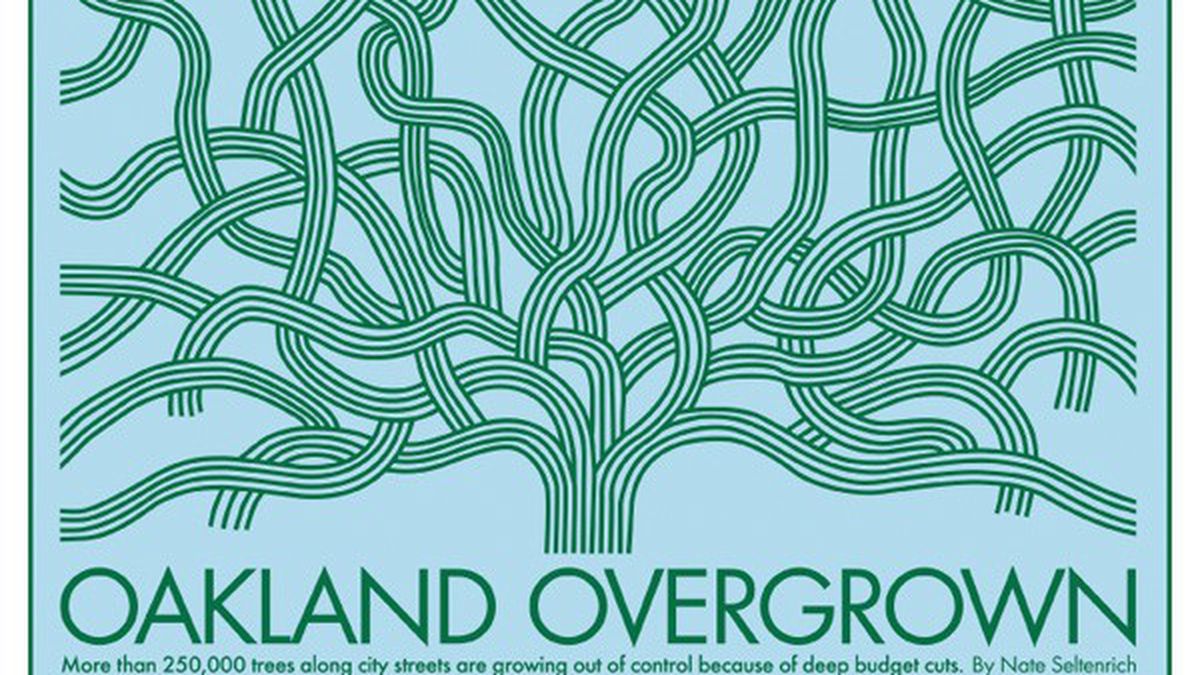 Letters for the Week of April 20

Readers sound off on Oakland trees, landlords, and art galleries.

This is outside my usual line of political discourse, but here it goes:

I am, and have been for more than thirty years, a certified horticulturalist. A large part of my extensive collegiate training was the care and maintenance of trees (arboriculture) in all its aspects, even so far as the study of plant genetics and botanical classes. I know my subject. But the problem with our local trees are not primarily technical, they are political.

During the Jerry Brown years, already marked money that should have been ear-marked for public landscape maintenance was funneled to other uses, namely development-related expenditures and other pet projects by Oakland city officials. This was before the big housing crash-and-burn, so everything was hysterically focused on build, build, build, way beyond common sense.

Now, an inconvenient regulation that obstructed development was a little known law that “Heritage Trees,” that is, trees of a certain size and age, could not legally be cut down without a special waiver to do so. A person desiring to cut down an old “specimen” tree had to show overriding cause. One such cause was imminent danger to the public. This brought to the minds of political weasels and greedy development a simple dodge: Engage in a campaign of intentional neglect to old specimen trees. Then when they become hopelessly decrepit and potentially dangerous, declare them “blight” and ask for a waiver to cut them down. The people in charge of issuing said waivers were often “in the pocket” of development interests, and were glad of any excuse to give out a permit for arboricide. In this manner, many beautiful old trees were destroyed to make way for cheesy condominiums and other unnecessary structures. This is still going on to this day.

And so it goes, and will continue to go, until the electorate puts a government in place that serves public interests instead of private corporations. But don’t hold your breath.

“Why a Politically Connected Firm Lost Its Contract,” Seven Days, 4/13

The “no” vote certainly damages Oakland’s pay-to-play image. Hurrah! I felt proud of the councilmembers who voted “no.” Too bad Kaplan, who said little, voted “yes.”

“Market rates” for rental properties are obscene in the Bay Area. For that matter, so are even the depressed “market rates” for home sales. The working class is being squeezed out of the area, as anyone can see who has lived here for more than a couple of decades. It is unlikely that the jury in this case was dominated by tenants, so if the jury felt strongly enough to render such a large award in favor of the tenants, we can probably be confident the landlord here was particularly stinky. “Jurors found that Cox had knowingly violated Measure EE, and they awarded each tenant damages for emotional and mental anguish relating to the case. A handful of tenants also received damages for costs incurred in having to move out. In fact, the tenants, one-by-one, had left the building as the case dragged on; only one resident remained by the time it ended.” Now the appeal proceedings begin, the paper chase continues, and the landlord has his (nearly) empty building. It may have cost him too much, but his apparent aim of presenting a multi-unit property to the market, free of encumbrances like affordable housing contracts, seems to have been achieved.

Gallery in My Living Room

I find it interesting that this article seems unaware of the fact that those of us who live around these new galleries that are popping up are finding the “maddening crowds” newly delivered to our doorsteps. This seems to be happening without much thought from the artists who run these “shoestring-budget storefronts” on how their projects are negatively influencing neighbors, and without much attention to the details of creating a venue in a space not built to house noise or crowds.

In my case, I intentionally avoided a loud social hot-spot when choosing my apartment years ago. Now I am looking for a new living space due solely to the arrival of a “gallery” in the apartment adjacent to mine, whose noise and scene bleed freely into my residence.

I love and support the arts when promoted responsibly, and have visited Art Murmur off and on for five years. However, I would argue that not all venues listed above “merit support from local art mavens.” Not so if those mavens understand that art, like love, is wonderful and expansive, but most of us prefer to go out and find it, not have someone else choose what it is for us, and when we will get to enjoy it in our living room.

In our April 13 Last Call column, we misstated the price of a six-pack of Lakefront Brewery New Grist. It’s $9.49.

In our 4/13 Culture Spy, “The Fight Club,” we mischaracterized Miguel Reyes as a “career anarchist.”

In our 4/13 Eco Watch, “The Cruel Irony of the Oakland Zoo Expansion,” we refer to the bulldozing of a vernal pool that served as a breeding ground for red-legged frogs. However, while the park is known to provide red-legged frog habitat, it is not confirmed that the particular frogs in question were red-legged frogs.

In our 4/13 music story, “Henry Rollins Ages Against the Machine,” we said Henry Rollins blogs for the LA Weekly. He actually has his own column.

The US House of Representatives is on track to cut $43 million from the National Endowment for the Arts’ budget of $167.5 million. That’s a 26 percent cut — the deepest in sixteen years!

Not only do the arts mean jobs, but for cities like Oakland and San Francisco, the arts have been a fundamental part of supporting youth. Through artistic expression, the lives of youth in our community have literally been saved.

I have worked as a teaching artist, through local theaters and in public schools. As an actor, I have worked with adult actors, for whom artistic work was the saving grace of their life. This is true of artists of all colors. One of the things that I am proud of living in Oakland (where there is so much to bemoan) is the way we unite around art as a community, expressing our vibrant and multicultural life force.

Federal funding for the arts leverages private funding. The NEA requires at least a one-to-one match of federal funds from all grant recipients, a match far exceeded by most grantees. On average, each NEA grant leverages at least $7 from other state, local, and private sources. Private support cannot match the leveraging role of government cultural funding.