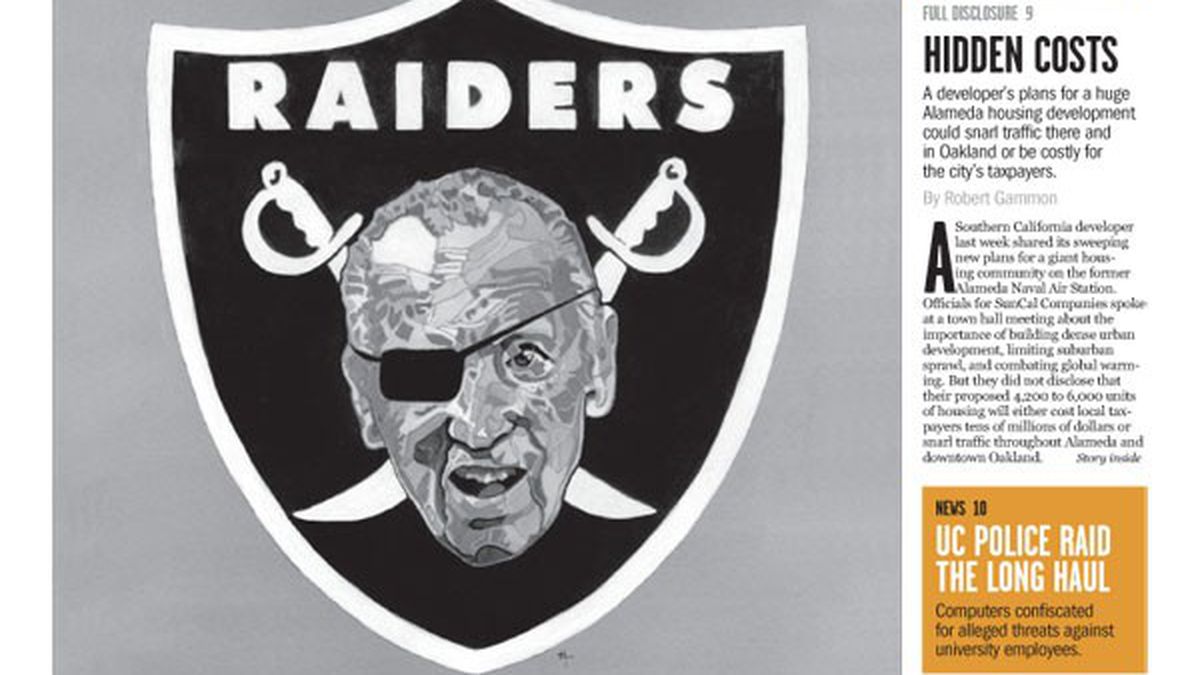 Readers sound off on Alameda development and the Raiders.

As an Oakland taxpayer, I’ve been convinced for years that the city could cut its losses by paying Al Davis to return to Los Angeles. Suggested bumperstick: go back, silver and bLAck!

The thing that (sadly) seals it in my mind (that the move back South is a done deal) is that the Raiders have never been able to sell all of their luxury suites since they’ve been in Oakland. They will have no problem doing that in Los Angeles, with the myriad of corporate/mogul types down there, and luxury suite revenues do not have to be shared with the rest of the league as other revenues are.

Play It Where It Lays

Work out a deal that will benefit the city and both teams using the best land available — the parcel upon which the stadium and arena already stand! Send the Warriors to HP Pavilion for a few years while a new football stadium is built in place of the arena, then build a new arena where the Coliseum stands once the stadium is done. Regarding attendance, the Raiders have seen both it and season-ticket sales go up since taking over from the Oakland Football Marketing Association. In fact, jobs will be created and money will likely be spent for and by the workers and the people of Oakland. Some of the street punks there seem like they need a job, anyway.

Your opinion piece on the Raiders was an absolute joke. Birdcage-liner garbage, not worthy of the recycle bin. The Raiders have always been, continue to be, and will always be a team of Pride and Poise. They are a class-act organization that takes care of the employees of the organization, and have put forth an effort to provide a quality team year after year. Every dynasty has a low point, and while the Raiders have hit theirs in recent years, there is always an upswing. It was only six years ago the team was in the Super Bowl.

Shame on you, one of little faith.

As for your opinion of the Day on the Green of years past (The Fixx, Madness, Oingo Boingo), I question you sir: Were you even there? I was! It was an amazing concert. I am amused that you conveniently left out the fact that The POLICE were headlining that concert. The Coliseum is still a fantastic venue, for sporting and music events.

I have lived in Northern California my whole life and Oakland for the last ten years. I believe in Oakland. Do you? Do you live in Oakland, sir? Do you attend Raiders games? A’s games? It is a good thing you are a contributor and not a member of the paid staff, you would go hungry. Keep up your little pathetic hate pieces, it only makes the great Raider Nation stronger. When you grow some balls, we as a nation would love to have you join us.

Don’t Be Such a Hater

Last week a Mr. Kirby Kleiman attacked my beloved hometown Oakland Raiders and the RAIDERNATION of which I’m a proud citizen. I helped create its worldwide appeal as sports fan personality, Raider Rob. I have been the lead mouthpiece for the Black Hole Fan Organization and for ten years have had to deflect the allegations against the fan base of one of the most loved and hated teams in sports. From national scorn to local disgust, the Proud and many of the RAIDERNATION have stood by this team with a unison that would make the great battalions of World War II proud. We believe in a brotherhood/sisterhood that goes unreported and is overlooked for the more “sensationalized” view of the Oakland Raiders being Cuba and Al Davis being Fidel Castro and we’re all in a 1960s way of thinking. Please!

Al Davis spent $200 million dollars this off-season to improve the on-field product. That is a very “2000s” thing to do (see Yankees, Patriots, and Cowboys payrolls). At 79, he is very much in the “now” football-wise and for most of the fans … that’s all that matters.

We don’t spend $61-$106 eight times each year to stare at Al Davis’ luxury sky box. We come to see each other, the team on the field, and play our role as the “baddest” fans on the planet despite litigations, losses, and media-generated drama. The true Raider fan knows that the team won’t return to Los Angeles and it won’t be in San Antonio or Las Vegas or outsourced to Kabul. No! It will reside right here and for us that are “Pro-Oakland,” we see the glass half full and aren’t so quick to give up faith and sell the team out like Lehman stock.

The centerpiece of a revitalized Oakland can lie in the Raiders building a stadium in Oakland and the citizens of Oakland not listening to defeatist naysayers who are quick to support more being taken from Oakland — always ready for a quick fix instead of fighting to make a way. Lew Wolff is the one who is disgracing Oakland and its “alleged” model tenant. He has tried to disassociate the team from Oakland by closing off seats, selling off talent, and talking lovingly of Fremont all the while unsure if he will be the chosen suitor of his suburban love. It doesn’t look like it’s going to happen … as for now.

Oakland is a beautiful city with no more problems than any other major city and that’s what Oakland is — a major city. We need to stop depreciating our size and potential because we’re going through a kind of “civic depression.”

There is a pride in the Oaklander that is about “standing tall” in the face of perceived collapse and rising — always rising up. Many of us who lived here when this was a “fully functional” city (three prosperous shopping malls, a quality educational system, proficient mass transit, and bustling night life) know it can be again.

I know fans who love Oakland, love coming here, have moved here to be closer to the Raiders and along with fans like me who stand by this team no matter how foolhardy it may seem to the “haters,” will support this team STAYING IN OAKLAND and will promote that position.

The bottom line, outside of the rhetoric and frustration of a few is: does Oakland want to fix itself? If it does, then the Raiders could be a cornerstone by the city committing some land; ensure local developers and contractors will be the builders; tie in the community by committing to job opportunities for Oaklanders by way of the Raiders and surrounding businesses that could be attached to the stadium project. I remember many said the Hegenberger Mall and the Wal-Mart wouldn’t work … but it has. This is what pessimists want who promote the bad in Oakland, so they can be on the “I told you so” team; don’t want to reveal that, like Baghdad, there’s been great success in Oakland in spite of the carnage going on around us. This is not new to Oakland’s problems and we’ve overcome them before. We can overcome our crisis now and be better for it.

A new Raider stadium on the existing site or maybe near downtown or in West Oakland is very possible; the city has already zoned large portions of West Oakland for redevelopment. It just takes a concerted effort from all involved to want to make money and blend the civic component with the plan so it benefits the betterment of the community. The Raiders are community-sensitive, and the city, after all the recent city scandals, has no choice but to be sensitive to the community. A big part of this community is the proud congregation of the “Silver & Black,” and before we let this team go again, we will fight for it to stay right here. So hold the moving vans and the auctioning off of Oakland’s treasures. If the Yankees can build a new ballpark in the middle of the Bronx, Oakland, if it believes it can, can build anything it wants. Let’s start with building back civic trust and civic pride in our citizens. Then, build a “beacon” for a “new” Oakland for a team that has been (whether bad or good) an international attraction for OAKLAND! The city many want to go away.  Not yet … says the RAIDERNATION!