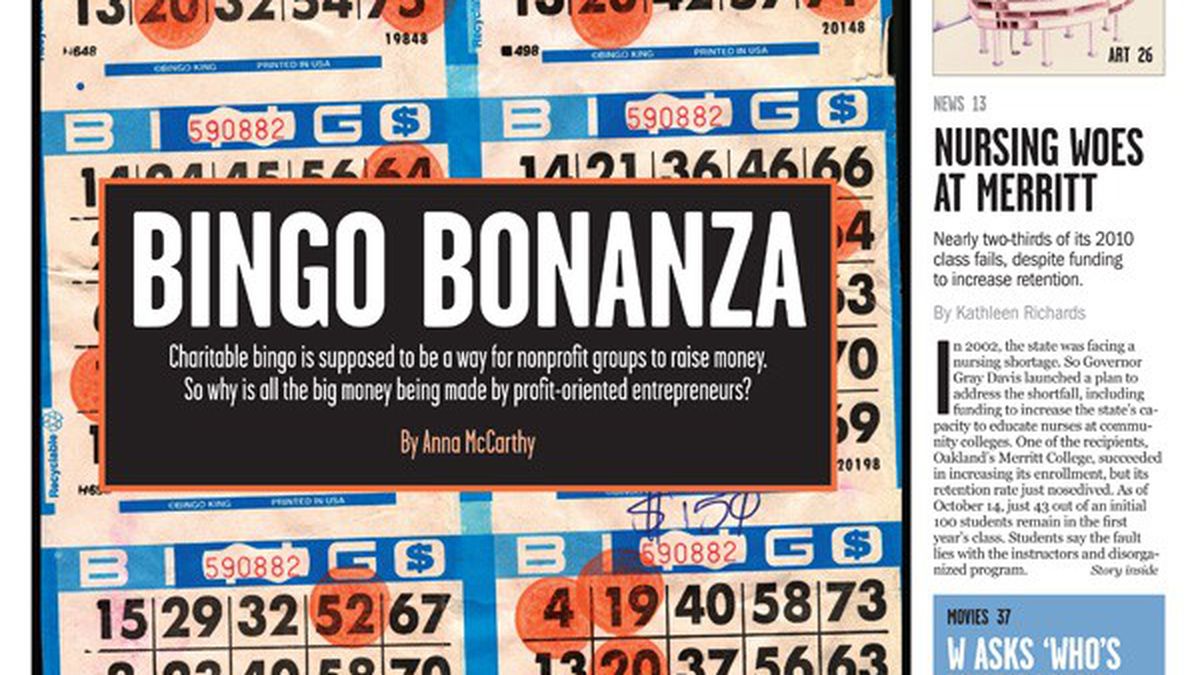 Readers sound off on Merritt College, bingo, and positive articles.

I was so happy to read this article. I had such a bad experience at Merritt College. I am still trying to deal with them in order to get a deferment letter.

I was accepted into the program and attended the two mandatory days of orientation in June where we were told to have all our medical information in by July 25th. When I went to hand it in on June 27th, it was not complete because my doctor’s office did not fill it out properly. Ms. Augustin, the staff in charge of the medical information, handed me back my paperwork and told me to come back before the first day of school with the completed file. This made it easy for me because I was leaving the country on the first of July for a month. She made sure I wrote her an e-mail that day explaining what happened.

On August 15th, I returned to hand in my paperwork to Ms. Augustin but she told me that I was dropped from the program because she didn’t have anything from me. I explained that we had talked on 6/27, that I wrote to her an e-mail about what we had agreed, but she tried to ignore me, was very succinct, and told me that a committee had to meet regarding my situation but she could not guarantee a meeting with them before the first day of school.

I never heard from them even though I called her office and the dean’s office of the nursing program. I finally went to school but was told by Dawn Williams, the program director, that I could not stay until the committee met. I explained to her that if I didn’t attend I would be missing a lot of information, she didn’t care. The dean finally got involved because I contacted the president of student services, Robert Powell. This went on for two days. Finally the dean, Dr. Kenney, told Mr. Powell that I was welcomed into the program. I went to her office and thanked her, she immediately knew who I was told me to come to her office and proceeded to tell me how great the program was and how great this was going to be for my family (I have two children). I was so happy but four hours later on my way back home to San Francisco I got a call from Dean Kenney telling me that she had confused me with someone else and that I could not attend the program.

I quit my jobs, paid for all my books, arranged day care, and basically changed my life to be subject to someone’s dislike of me. I believe that someone below Dr. Kenney said something because how could she look me in the eye and tell me they had made an exception for me and then a few hours later tell me she confused me with someone else. Who?

I am now waiting for her boss, Dr. Berry, to respond and allow me to defer.

I know of someone else whose situation was similar but was called the day before school started and was told that they had reviewed her case and she could attend the program.

If you wish to continue the story I’m sure we could get more students to talk. There’s a lot more details.

I enjoyed the article by Anna McCarthy on bingo. It seems like she did some significant research and points out that if someone is truly interested in contributing to a nonprofit they should write them a check directly, because the only charities receiving a significant percentage return are the retirement funds of the landlords of the facilities where the games are held.

There is, however, one major flaw in her article, reinforced both in her sidebars and in a caption to a photograph accompanying the article, and that is where she states: “Smart players play as many cards as they can afford,” and “Real competitors will snatch up as many of the [bingo aid] machines as the hall will allow, maximizing their odds of winning.” Anna, the “odds of winning” never, ever change, no matter how many cards you play. If a game sells $10,000 worth of cards and pays out $5,000 in prizes, these are the odds, no more, no less. You can increase your chance of cashing a card if you have more of the cards for a game, but the more cards you buy the more any potential winnings you might realize are offset by the cost of the cards. Like almost all gambling, it is a rigged game. As long as you can look at it as entertainment, fine, but if you keep playing the game, even if you get lucky here and there, you will inevitably lose.

By the way, I’ll take this opportunity to commend the Express for a letters column that actually prints a variety of letters instead of just a few. It opens up the forum for public discourse.

Important article by talented writer. This is the kind of feature that helps everyone gain a positive slant and gives good solid insights into what people are contributing and doing in many areas. Hope many will be interviewed by the author in the future. Most of all I hope all women regardless of ethnicity will get involved in voting and expressing their views and continue being involved after the election. This is what makes America great after all. All voices heard loud and clear and respected.

Though I can understand the opinion that the universal uniforms could be confusing, and the use of the witches controversial, I found the acting to be tremendously deep. I disagree heartily that Weak as Macbeth is “yelling by rote” — any shouting she uses is infrequent, and is fully in keeping with the role. Her interactions with Lady Macbeth and her soliloquies in particular were dynamic and full of humanity. The acting across the board elevated this production to something really special, I found. I was very moved.

I have an idea — what if the residents of Oakland stopped sniveling about the increased crime and stopped kowtowing to the criminals? It is time to step up and form neighborhood watch groups and report crime when it happens. The vast majority of crime in Oakland is never reported because people think the police will not do anything about it anyway, or they are afraid their insurance will go up if it is reported; you can report that broken car window to the cops without reporting it to your insurance if you don’t want to have them pay for it. People do not realize that when they report crime they get more patrols in their neighborhood — and you can report all crime anonymously.

I think it is time that a finger or two gets pointed at the good citizens in this town that “let” crime happen in their neighborhoods by pretending that they don’t see it happen. The next time a young man is shot on your street, take a long hard look in the mirror and ask yourself what your own role in the shooting is because you didn’t “snitch.” Everyone wants to make someone else responsible. Crime is not a problem for city government to solve. It is a problem that everyone needs to be involved in solving. And for the record — building additional rec centers is NOT going to solve Oakland’s crime problem. Courage will solve Oakland’s crime problem and nothing less. All that is necessary for the triumph of evil is that good men (and women) do nothing.

Two things. If you’re going to start a story on the cover page that continues, can you please indicate WHERE the continuation is found (specific page)? I realize the “story” is “inside,” however; just a teensy weensy bit of additional direction would be appreciated. Also, calling people of color “minorities” is played out [Ideopolis]. I could go on at length about the legacy of racism, patriarchy, and oppression as it relates to one’s perception of being the majority but I’m sure already know all about that. The East Bay Express and the Bay Area as a whole seem so much more progressive. I’m surprised this term was even used.

In our November 5 music pick on D’Wayne Wiggins, we incorrectly listed the show dates. They were November 7 & 8.

In our November 5 feature on John Swett High School, we incorrectly stated the year Lizzie Ray won homecoming queen. It was 2002.

Give Mom the Gift of Weed

Video: Scott Olsen Before Getting Hit at Occupy Oakland