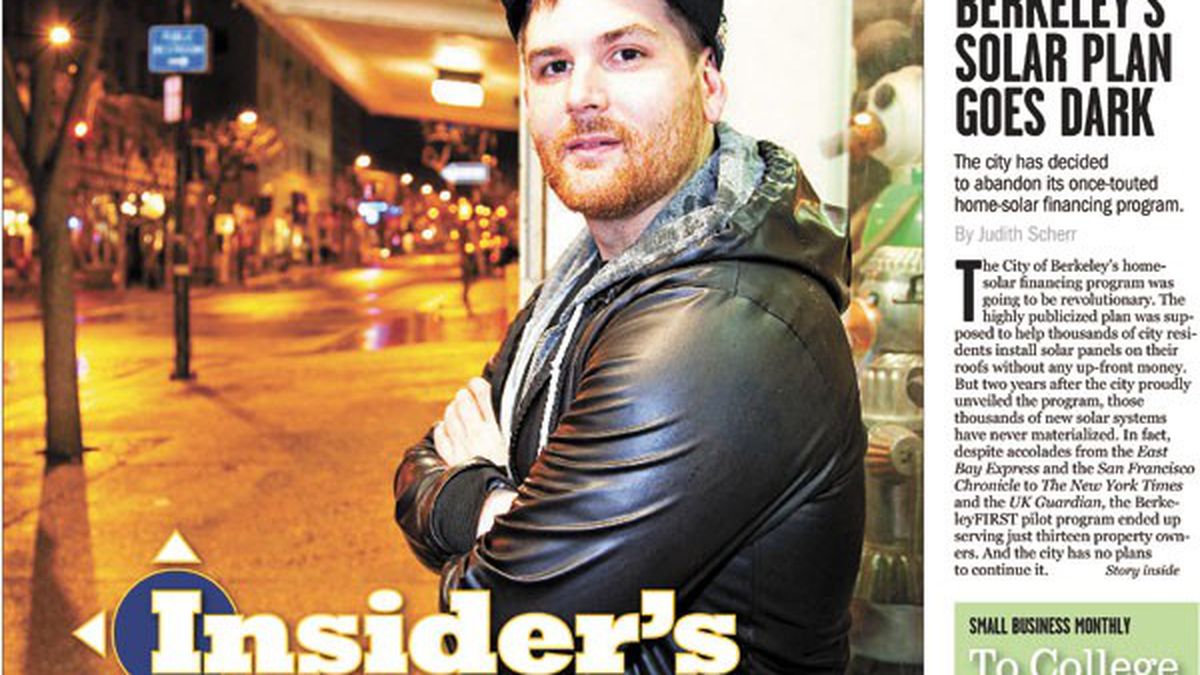 Readers sound off on our Insider's Guide, Oakland's pushcarts, and more.

While the latest Insider’s Guide is full of good info, it makes the East Bay look like San Francisco — startlingly white. More specifically, weren’t there any black folks to feature in the guide’s photos and stories? At least one??

While a person of color is featured on the cover of the Insider’s Guide (as well as some of the inside photos), the letter writer makes a good point.

As I stated in my original letter to the City of Oakland, I would have paid the ticket if I thought it was justified. However, since no signs were present (as they are on several other streets around the West Oakland BART station), I assumed parking there was allowed. Since then, I have seen cars parked there every time I take BART into San Francisco. To hear that a sign has been added AFTER THE FACT is truly, truly sad. This “odyssey” has been both frustrating and amazing.

It was disturbing to read of selfish restaurant owners and permit-holding pushcart operators in Oakland’s Fruitvale district who want to expel unlicensed pushcarts from their streets. How quickly some people forget that they themselves were once newcomers.These poor, hardworking pushcarteros just want to put food on the table for their families. Rather than being vilified as “pirates” they should be celebrated for their contribution to the diversity they bring to Fruitvale and thanked for what they add to its economy.These undocumented pushcart operators should take their cue from those who have come before them and experienced similar discrimination. They should gather their pushcarts en mass and take to the streets to demand a path to legalization. I’m sure they willfind a sympathetic hearing with Councilman Ignacio Del La Fuentes and Representative Barbara Lee.And remember no pushcart is illegal: Pushcarts didn’t cross the street; the street crossed these pushcarts.

Matthew Stafford’s review of Commis notes that their “delicacies” are “conservatively apportioned.” I think that means that you don’t get very much food on your plate. Why didn’t he just say that?

A paragraph about the small amount of food on the plate was reduced to a sentence for space reasons. Sorry to get all fancy on you.

In his February 10 cover story article on the Oakland mayoral race, writer Robert Gammon states in his final paragraph that “one of the primary goals of ranked choice voting is to encourage more candidates to enter the political process.”Continuing, Mr. Gammon asserts that the two current Democratic Party candidates — Don Perata and Jean Quan — could perhaps monopolize the mayoral race because other potential candidates “may choose to stay out of the race” for lack of significant campaign money.The good news — fortunately for Oakland’s voters — is that Mr. Gammon’s pessimistic analysis is premature: There is ALREADY a third candidate who has formally entered the Oakland mayor’s race: Green Party candidate Don Macleay.Don Macleay is a former machinist, small business owner and non-politician who is a viable and deadly serious candidate for Oakland mayor. Mr. Macleay rejects the entrenched, insider politics of Oakland’s political establishment that have prevailed in the city for too many years.With the introduction of Ranked Choice Voting — also known as “Instant Runoff Voting” — for Oakland’s November 2010 mayoral election, the electoral playing field will be leveled significantly: a strong third party candidate like Don Macleay will have greater viability and access to voter consideration leading up to the November election.To learn more about Don Macleay’s Green Party candidacy, please visit www.macleay4mayor.org

In declining to bring charges in the reporter-taping case, the Alameda County District Attorney’s reported rationale is that the reporters did not have an “expectation of privacy” in the contents of the conversations. This is puzzling. The California Supreme Court has held that secretly taping a phone call is criminal if “a party to that conversation has an objectively reasonable expectation that the conversation is not being overheard or recorded,” “regardless of whether the party expects that the content of the conversation may later be conveyed to a third party.” The District Attorney has the discretion to decide not to prosecute a case, but the weakness of this justification suggests that the decision not to charge a high-ranking member of the Attorney General’s staff was based on something other than impartial legal analysis. (Quotes are from the California Supreme Court’s opinion in Flanagan v. Flanagan, 27 Cal.4th 766 (2002)).

Come to the 21st Century

One is used to, in Berkeley, reading in small newspapers about “managing/accessing” one’s chakras, qui, vibrations, karma, (whatever all those things are!), etc. What a disappointment though, to read Ralfee Finn’s (who specializes in “transformation astrology!) astrology piece in the Feb 10-16 issue of the Express letting the Express readers know about all the spectacular astrological phenomena that might be related to Valentine’s Day! I say “what a disappointment” because there was truly a spectacular astronomical event between 8 and 9 p.m. on Feb 14. Barring too much light pollution or overcast skies, one could simply stand outside, look due east, and see the red planet Mars; and then make a 90-degree turn to have a gander at Betelgeuse, a red star billions the size of Mars, displaying more Valentine red. Well, I guess ya makes yer choice: middle ages or 21st century!

In the story “The Next Newspaper Death,” 3/3/10, we misspelled the last name of San Francisco Bay Guardian co-owner and publisher Bruce Brugmann.