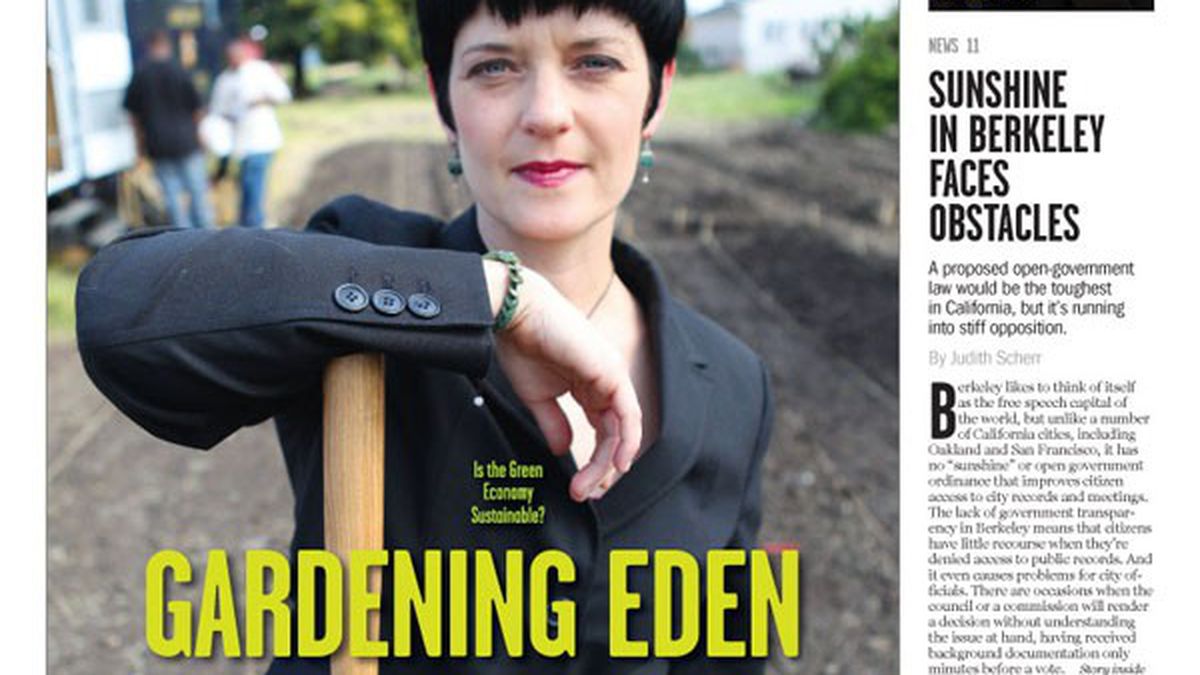 Readers sound off on the Oakland police pension, recycling in Berkeley, gardening in Eden, and racism among our writers.

And Pharoah sent for Joseph, and when he had shaved and changed his clothes he came before Pharoah. And Pharoah said to Joseph, “I have had a dream, and there is no one who can interpret it. Behold, in my dream I was standing on the banks of the Nile; and seven cows, fat and sleek, came up out of the Nile and fed on reed grass. Then seven other sows, poor and gaunt, came up after them. And the thin and gaunt sows ate up the fat cows, but afterward they were still gaunt as at the beginning.”

Would that our clueless city government, particularly of Ignacio De La Fuente, have remembered this simple Biblical tale before they made financial deals they couldn’t sustain (or justify). But hey, that would be too much like right.

“Recycling and Anxiety in Berkeley,” Feature, 6/9

While I applaud the recognition of refuse as valuable, the use of the term “poachers” to describe those who collect it is highly offensive.

There is a proper term for those who scavenge through what others discard or leave behind; gleaners. Gleaning has been the last resort for those who fall through the cracks in every culture since the dawn of time. In fact, Judeo Christian morality demands respect for this practice in Leviticus:

“When you reap the harvest of your land, do not reap to the very edges of your field or gather the gleanings of your harvest. Do not go over your vineyard a second time or pick up the grapes that have fallen. Leave them for the poor and the alien.”

The term “poacher” is a blatant move to criminalize the needy, akin to making sitting on sidewalks illegal.

Your article depicted gleaners as hostile and aggressive, and while there may be some antisocial gleaners (as there are antisocial co-workers), the vast majority of them are unobtrusive and polite. Citing the exceptions as a “growing trend” is fear mongering and divisive.

As our society comes to terms with is dwindling resources we must not turn on those who are even less fortunate.

Thanks for the article “Gardening Eden.” The Express focuses too much on Oakland and Berkeley. There other communities to cover and, as you see, there are interesting stories out here.

What a Racist rag! Or at least racist writers.

Man, it used to be a joy reading the East Bay Express; writers were clearly not seeing the world through a “white” man’s perspective — yet instead, wrote clearly as the world is. Not anymore, evidently. After reading one letter to the editor in which the writer rants on and on about racism and its non-relationship to a liquor license, I read about the Johannes Mehserle trial getting “underway” (sic) after lawyers for the “white ex-BART cop” were successful in preventing blacks from being on the jury (oh, really? How about that the prosecution “failed” to get the jury it wanted (such a racist writer, Gammon only sees in black-and-white). Then flip the page and writer Downs says the “once-black market” turned “white.” There isn’t even such a euphemism. These racist writers depict clearly the racism that is prevalent in so-called enlightened California: Californians are among the most racist people on the planet — “reverse” discrimination is another racist rant. Discrimination is discrimination — doesn’t matter who is discriminating against whom. And to declare it as “reverse” shows unmitigated racial arrogance and ignorance.

Victoria is right. We spelled “under way” wrong.

In “Can Health Care Treat Crime?”, our June 23 feature about the Healthy Oakland program, we misstated one element of Charles Copeland’s parole. He was prohibited from traveling outside a fifty-mile radius, not a five-mile radius as we reported.

Also in our June 23 issue, we ran the incorrect music and DJ listings.

Letters of the Week: Readers Chime In On Next Head of...