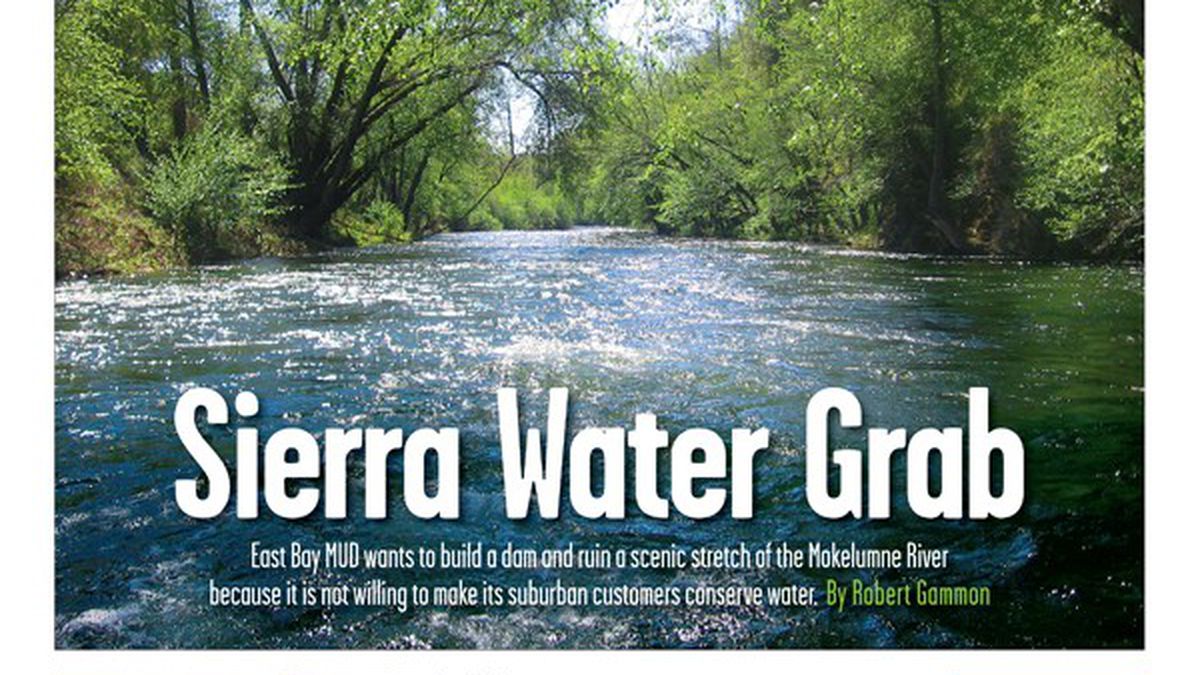 Readers sound off on composting, damming the Mokelumne River, Koreatown, and toll lanes.

Robert Gammon’s article starts with the false premise that we must
choose one of two options for handling waste organic materials when, in
fact, we need both.

Scores of Oakland businesses supply waste food materials, ideal for
methane production, to EBMUD’s anaerobic digesters. The solids that
remain after digestion are disposed in landfills, because the food
scraps are co-digested with biosolids from the water treatment
operation. The City of Oakland is engaged with EBMUD to deliver
sufficient quantities to justify dedicating a digester solely to food
scraps, so the remaining solids can be shipped to composting facilities
rather than landfilled.

The benefits of composting far outweigh the nominal methane from
compost production and the transportation-related emissions from the
trucking of green waste to the Central Valley. Compost displaces
energy- and emissions-intensive petrochemical fertilizer, reduces
associated toxic runoff, and saves water and the energy used to deliver
the water. Finally, Central Valley compost facilities are ideally
located near their primary customers — the farmers who use the
finished product.

The City of Oakland will continue to promote composting as a
preferred alternative to landfilling, while actively supporting EBMUD’s
efforts to produce biogas from commercial and industrial food
scraps.

Ms. Dowdakin misstates my story. I never asserted that we should
send green waste (yard trimmings) to EBMUD so that it can be turned
into methane gas. In fact, the story states the opposite, and notes
that EBMUD does not have that capability. Instead, my story argues that
we should continue to turn green waste into compost, while seriously
exploring whether to send our food waste to EBMUD so that it can be
converted to methane gas and turned into clean energy by the utility’s
West Oakland generators.

East Bay MUD should not dam or violate the Mokelumne River. After
reading your article, and having moved to Nor Cal looking for this kind
of unspoiled recreation, I went up to this river. I was not
disappointed. It was being enjoyed by a stoked group of UC Santa Cruz
students and grad students on a led kayak tour, a man with four brown
labs, doing tennis ball laps, a number of hikers, swimmers, and
picnickers on the shore. We can get and conserve water somewhere else.
We should let this little river be well enough alone.

“Not Your Typical Ethnic Enclave,” Feature, 5/6

Who Should Be Humble?

Resident Tao Matthews commented, “They (Korean investors) should
humble themselves. This is not Seoul, Korea. This is Oakland
Northgate.” A comparable neighborhood in Seoul (the outskirts of
downtown) would reveal immaculate streets free of graffiti and litter
and rates of violent crime, theft and property damage so miniscule that
merchants and restaurateurs routinely leave their sidewalk retail
displays, chairs, tables/table settings outdoors all night. If such
neighborhoods were commonplace “where I come from,” as far as the
notion of who knows how to create/who has created wholesome and safe
environments is concerned, regardless of my agenda, I certainly would
not humble myself to the neighborhood of Northgate Oakland.

The Korean investors in question would not have a track record of
legal and profitable real estate transactions were they not capable of
“humbling” themselves by heeding tax codes and real estate law
(something that local and domestic real estate tycoons small and large
have failed to do, resulting in financial ruin for their investors).
Furthermore, aside from the humility required by good citizenship, few
immigrants or international investors who brought themselves or their
money to this land ever succeeded alone or made America a better place
by humbling themselves through acquiescence to our status quo.
Historically, the immigrants’ desire to escape the worst of their
homeland while recreating its best on our shores is the impetus that
has collectively resulted in the greatness of America.

These Korean investors pursue their goal of investing in and
revitalizing an American neighborhood, if not for altruistic reasons,
then surely because such previous attempts have proven to be
financially successful throughout American history. If they succeed in
accomplishing here in America what we Americans have failed to
accomplish ourselves, perhaps it is we Americans who should humble
ourselves instead.

Matthews’ suggestion that Northgate Oakland’s international
investors humble themselves (By not being so successful? By failing in
their efforts to renew Northgate Oakland?) demonstrates her ignorance
of the historically positive effects of immigration and
international investment in America. Her ignorance is surpassed only by
the outright bigotry of her comments.

The purpose of carpool lanes is to reduce pollution (not congestion)
by reducing the number of cars on the road. The purpose of congestion
pricing is to smooth out traffic flows by shifting non-essential travel
to off-peak periods. These are competing goals.

As noted in the article, carpool lanes tend to increase congestion
in other lanes. Conversely, any reduction in congestion will increase
the amount of driving by reducing the cost to drivers.

For this reason, toll lanes will be ineffective where carpool lanes
are uncongested, as is often the case with Bay Area roads today.
However, there is reason to believe that these roads may become more
congested in the future.

The Price Should Be Right

While Mr. Gammon’s piece highlights an interesting debate about
traffic data and the underlying human behaviors, it misses the bigger
point. Traffic congestion is essentially a pricing problem. At the peak
(which is more and more a plateau, ameliorated only by the temporarily
crappy economy), there is much more demand than there is capacity. We
see the same thing with daytime mobile phone minutes and flights on
Mondays, Fridays, and the Wednesday before Thanksgiving, for example.
How is it normally solved? It costs more for daytime mobile minutes,
and the discounted fares at high-travel times are fewer and vanish
sooner.

So while it may or may not be politically or economically wise to
convert highway lanes suddenly to carpool lanes and then make them toll
lanes, the solution to a pricing problem is clearly pricing in some
form. Economists have known this for decades; we planners and
politicians (and indeed, voters) have been so stuck on the “Free” in
the unfortunate term “FreeWay” that we’ve lost our “Way.” Attempts to
convert a lane or two are a step in the right direction, not only
because they can generate revenue, but because they use our
infrastructure much more wisely.

The major point lost in the article (and apparently not mentioned by
the faculty interviewed, to my surprise) is that a congested “freeway”
lane operates not at, but significantly below, its capacity. If lanes
were properly priced (free or cheap at midnight, pricier at 8 a.m. and
5 p.m.), we could ensure maximum flow, saving time, fuel, pollution,
and lots of frustration. The economic (and environmental and social)
value of these improvements would likely swamp any costs of moving
toward FasTrak pricing of lanes. Of course, this would have to been
done in a politically sensitive manner, weaning drivers away from
congestion and providing both choices — a “free” opportunity to
sit in traffic, and a “paid” option with a guaranteed flow rate, by
setting the prices according to real-time traffic conditions.

Greetings. Your “Aquarium Age” Ralfee Finn is a real jewel! What do
you do to your people when they do a great job? Whatever it is —
do it for Ralfee Finn. His name is a mysterious fascination for me and
sometimes the way he turns a phrase is so right on. I love the East
Bay Express because — guess — Ralfee Finn.

The East Bay Express won five awards, including three
first-place awards, in the East Bay Press Club’s annual Excellence in
Print Journalism Contest for 2008. Clubs editor, editorial coordinator,
and staff writer Nate Seltenrich won first place in the Lifestyle
Feature writing category for “Writers, Unblocked” (August 6, 2008), a
cover story about an Oakland organization that helps artists overcome
creative hurdles. Staff writer Robert Gammon won two first-place
awards. “The Torture Professor” (May 14, 2008), a feature-length
polemic on why UC Berkeley should fire law-school professor John Yoo,
won in the Best Opinion writing category, and “Tip of the Iceberg”
(December 17, 2008), an examination of Oakland lobbyist Carlos Plazola,
won for Best Analysis writing. Gammon also earned a second-place award
in the Best Series category for “The Belgian Connection,” a series of
articles about AC Transit’s controversial bus purchases. And he got
third place in the In-depth or Investigative Reporting category for
“Arrests Are Down, and Crime Is Up” (December 3, 2008), a cover story
that revealed the Oakland Police Department’s dismal record for solving
violent crimes. The contest award winners were announced Friday, May
29, in Oakland. The writing categories were judged by the Los Angeles
Press Club, the Cleveland Press Club, and the Milwaukee Press Club.