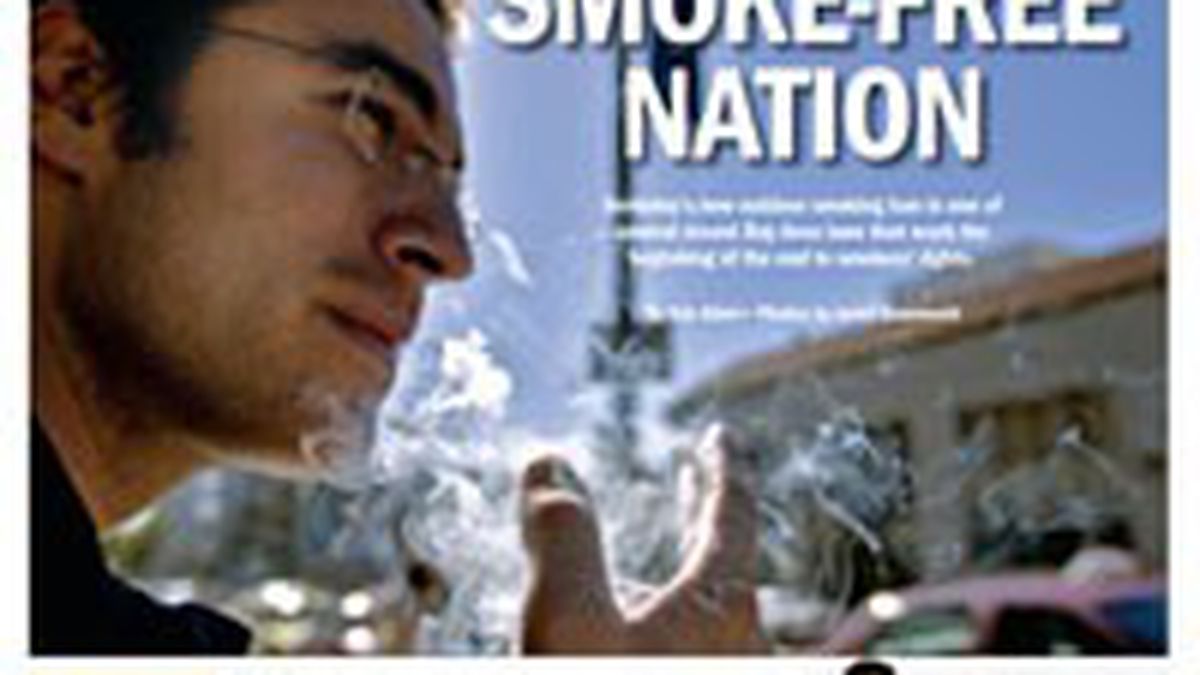 Readers sound off on the light brown apple moth, the smoking ban in Berkeley and other cities, Hidden City Cafe, the East Bay Express, and the mess in Oakland.

“The Real Pests to Agriculture,” Your Words Here, 6/11

The Spraying Hasn’t Been Stopped Yet

On behalf of Bay Area Stop the Spray groups, we celebrate and thank all the individuals, public officials, doctors, scientists, and more than 30 local governments and 80 organizations who spoke out to stop aerial spraying of pesticides over our cities for the light brown apple moth. The state’s abrupt decision to halt the urban spray is a clear testament to the power of an informed movement of citizens.

Unfortunately, the state still intends to aerially spray forested and other areas (perhaps Mt. Tam and East Bay parks?) for light brown apple moths and to use ground spray and other dangerous pesticides (including permethrin, a carcinogen, toxic to bees) in our neighborhoods.

The state has filed court documents indicating an intent to proceed without environmental review. We have asked for written clarification of what treatments are planned, and we continue to work to reclassify the moth to stop this unsafe, unnecessary, and ineffective program.

We hope Bay Area citizens will continue to oppose this whole program and support the transformation of agriculture from dependence on mono-cropping and toxic chemicals to a reliance on the wisdom of nature via organic, bio-diverse farming, so we may all enjoy a healthy, pesticide-free food supply.

Smoking: For the Rich Only?

Yes, breathing secondhand smoke in an enclosed space is dangerous to the individual. What is dangerous to our democracy is the overzealous abridgement of smokers’ rights. Look where this is heading: “It’s not too difficult to imagine a future in which the only place people can light up is in a single-family home — and only if there are no children or neighbors nearby.” And who can afford to buy those single-family dwellings? Once again, the comfy upper-class gleefully legislates away the dwindling comforts of the poor.

Drug Prohibitions Do Not Work

As a lifelong nonsmoker who grew up in a smokers’ household with no adverse effects, we need to halt the prohibitionist logic behind the secondhand smoke agitprop. We have no idea if 47,000 of the alleged 50,000 victims really die of heart disease related to obesity, high blood pressure, and other factors. Ergo for the 3,000 alleged cancer victims.

Last year my 87-year-old aunt died of sudden lung cancer, and she never smoked in her life or was around smokers.

The fact of the matter is that everything has side effects or externalities and that is the price of living in civilization. The American Lung Cancer should have their tax exemption lifted for engaging in blatantly political acts such as lobbying for laws. After the failed experiments in alcohol and drug prohibition, you would think we’d have learned something. But the brain-dead statist-collectivist NEVER does.

Where Are Our Priorities?

Whatever happened to progressive, liberal, radical Berkeley? It seems to me that everyone has gone soft and reactionary, and that policies such as those being proposed by local lawmakers are, indeed, quite draconian.

As both a nicotine smoker and a healing arts practitioner (yes folks, we exist), I can clearly empathize with those on both sides of this issue. I have often been complimented by non-smokers for my sensitivity to their rights and their comfort zones. I have also witnessed and been disturbed by the inconsiderate practices of other smokers. But I can assure you that considerate smokers exist in this world and shouldn’t be punished so severely by those who are clearly riding on some political bandwagon.

While I agree with most of the bans already placed into effect, I do not think that we need to go any farther. I do not smoke inside of the units that I rent out of respect to my landlords. I have requested permission from my neighbors to smoke in an established outdoor area. I do not smoke in food-related public spaces: if I am eating at say, Fourth Street, I step away from the patio and walk into the parking lot. I sit far away from other people in public parks; I cross the street or put my cigarette out if I see children or a pregnant mother walking in my direction. I always extinguish my butts cautiously and throw them away in garbage receptacles.

What options are left for smokers? If I can’t smoke in my own apartment, can’t smoke outside of it, can’t smoke in parks or in public spaces (including sidewalks), where exactly can I smoke? If I go 25 feet from my apartment in any direction, including the street in front of my own living environment, then I am already violating somebody else’s 25-foot zone. Are they going to put us inside of smoke bubbles? Enforce some mandatory Brave New World-type cessation program? Until that time, perhaps we should all get in our cars, roll up the windows, and drive around the block, adding toxic fumes and traffic congestion to our lovely cities. As for Julie Sinai, please ask her if she drives a car, eats or shops at corporate chain stores, contributes to landfills on a weekly basis, drinks an occasional soda or alcoholic beverage, takes or prescribes medications promoted by the drug industry.

Come on people! These are dire times and we need to rally our focus on much more important and pressing issues. We pollute our cities in many ways. Nicotine does impact health. So does the standard American diet. So does our addiction to oil; so, for that matter, do Wi-Fi and other forms of technology. Let’s get our heads together and truly make a difference in this sleepy city.

As a Cal student, I’m glad the City of Berkeley has taken serious action against distributing free tobacco coupons in all public places, especially for bars and other hot nightspots. Right now, the tobacco industry sponsors bar parties all over the country, particularly hitting hard in college towns. At these events, tobacco companies can prey on young adults with attractive coupons and gifts hoping to recruit new smokers and successfully imprinting their brand in young minds.

Most importantly, limiting what the tobacco industry can give away at these special events may also limit their access to Cal students’ private information. In exchange for tobacco coupons and accessories, tobacco promoters swipe driver’s licenses for the names, mailing addresses, ages, and ethnicities of party participants. They use direct marketing techniques to send slick tobacco ads, coupons, concert tickets, CDs, and birthday gifts, each targeted to an individual’s tastes and hobbies.

Because we already know, from a recent Harvard study, that college town tobacco industry bar promotions have the greatest effect on a nonsmoker’s smoking behavior, I think that the new Berkeley law will protect the college community from unnecessary cigarette ads and prevent many new students from picking up the deadly habit. By putting a stop to this, Berkeley has found an effective way to counteract one of the main marketing strategies of the tobacco industry.

As the scientific evidence about the harmful effects of secondhand smoke grows exponentially, citizens are turning to their elected officials for help. Although the long-term effects of secondhand smoke can cause heart disease and lung cancer, people with respiratory problems such as asthma or emphysema can suffer immediately. Congratulations to Berkeley for creating a cleaner air environment in their commercial area.

I write this as a lifelong citizen of Oakland and one who is disgusted with the conduct of our so-called city officials. Their leadership is criminal and inept. It has a Bush/Cheney Regime feel to it that is uncomfortable and dangerous.

Mr. Mayor is a joke, and a very bad one at that. History will record the election of Ronald V. Dellums by the citizens of Oakland, as the “worst decision” residents of an American city have ever made.

Ms. Edgerly is just going to be allowed to walk, after the crap she just pulled. You’re going to hide behind a police investigation and side with a “personal” working friendship. This exactly is the problem with our city government. For years, there have been too many of you downtown, with these friendships, that impair your judgment when it comes to holding fellow public officials accountable. You’re all so chummy, that there is a feeling of guilt if you take the right side of an issue against your goddamn friend. What BS!

Ms. Edgerly, no matter what the excuse, should’ve at least been suspended until she retires. She shouldn’t have been at the scene of this drug bust, bottom line. She’s not the Mayor, or is she? She sure seems to have a lot of power, for just being the city administrator. You’re a “coward,” Mr. Mayor, and your inaction to reprimand this woman is an “INSULT” and “A SPIT IN THE FACE” to the citizens of our city, which is suffering so much from the aftermath of Jerry Brown’s misguided mayoral turn. An overworked and understaffed police department is trying its best to get a grip on the wild, wild, west violence and these wanna-be gangsters, destroying our quality of life; this is how you show them support?

Her nephew is a former criminal, who it seems hasn’t learned a damn thing from his time in jail, and his “aunt” sure isn’t a positive influence. I wonder, Mr. Mayor, and the rest of you. How many real honest young men and women, who are ex-convicts, who came to apply for Mr. Lovan’s position, were turned away so he’d have a job? Men and women that would have really used that job to better themselves and would have appreciated the opportunity and wouldn’t have abused it. I know several! How many citizens applied to be in the police department, who wouldn’t have needed a relative’s influence or needed four chances to pass a test to secure the job? To think too that there is a “racial” component to this too. For years, blacks have railed against whites for abusing power and positions. For getting their friends and family privilege, in lieu of giving a minority an opportunity for a fair chance at something, and here we have a good representation of black Americans inside the city government, entrusted to do at least better than the white political structure they accuse of corruption against them (rightfully so a lot of the time), and here there are many of them in the structure doing the same thing, to their own community and the city as a whole. This has got to stop!

Mr. Mayor, I wish you no ill will but I’m praying at any church I can, every day, that the FBI comes in and investigates the whole city government, for deceit, negligence, and corruption. Ms. Edgerly isn’t alone in her actions and get-overism at the expense of our city and what’s right for our citizens. All of them. From Rockridge to 96th and Plymouth. This is a slight against us all and puts all our lives in jeopardy. I thank you. Now I have to hope I’m not murdered on the streets or God forbid have to do bodily harm to a fellow Oaklander because my city/civic leaders are corrupt cowards!

This town needs an enema!

The June 18 column Full Disclosure, “Profiting from Development,” mistakenly stated that Oakland businessman Dan Mayorga stood to make a 382 percent profit on the sale of his property to the city of Oakland. It should have said that the value of his investment could increase by 382 percent.