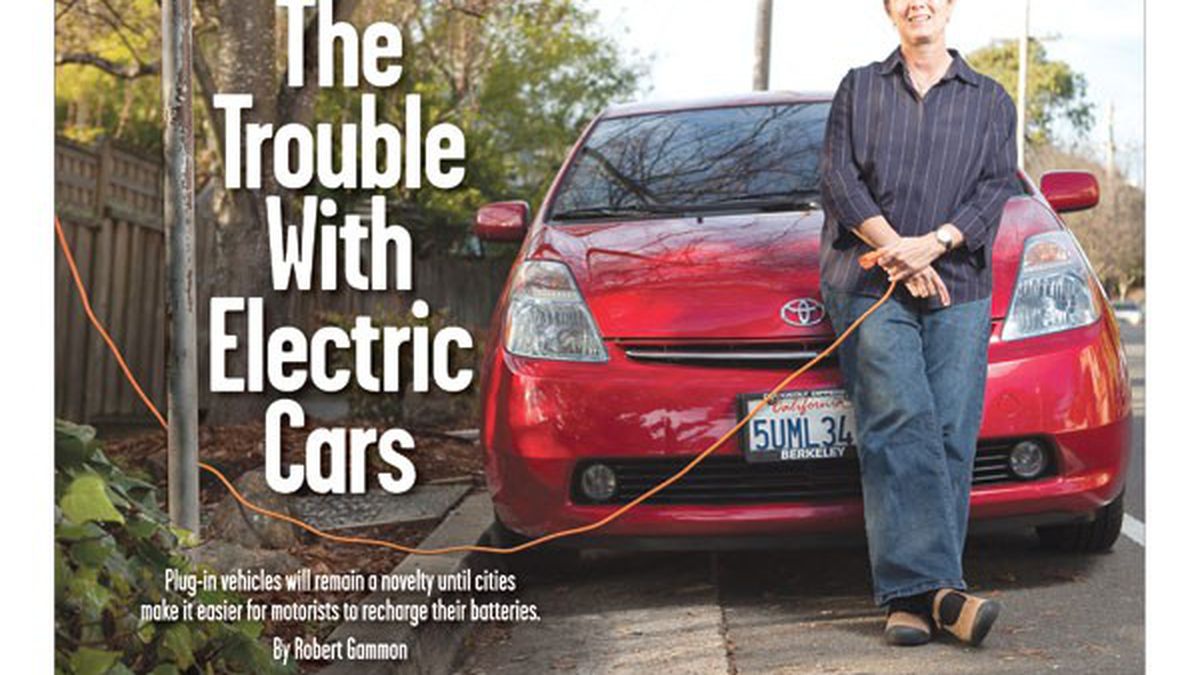 Readers sound off on electric cars, women in metal, and Alameda's Measure B.

“The Trouble with Electric Cars,” Feature, 2/3

I do not understand why it should be the cities’ responsibility to provide accommodation for electricity for cars parked on the street. Cars parked on the street are already a liability to cities, as they are the most susceptible to theft and burglary, the two most common crimes in the country. The cost of their liability may be the largest expense that cities and counties incur, yet their owners do not pay property taxes on the land that they are using, unlike those who park on their own property. If we allow these people to put electrical outlets on the street, will we incur additional liability if they suddenly decide that they “own” that parking space and harass anyone else who wants to park there? Who is going to make sure that they will be responsible if there is a problem.

In cities where there are people without homes, we should not be giving tax-free land for automobiles at all. We should be looking at ways to make car owners pay for themselves, not subsidizing them even more.

If Mary Goulart has such a “bug up [her] butt about [her] carbon footprint,” she might consider a different solution than a plug-in hybrid car. I can’t believe Robert Gammon’s article never once mentions the fact that until electricity generation becomes more dependent on renewable sources, such as wind, solar, et al, electric cars will do next to nothing to decrease carbon emissions. The craze over hybrids, as well as the sure-to-follow craze over plug-ins, manages to ignore this. Once upon a time, this inconvenient truth was at least given a smidgen of media coverage, especially around the time that Gov. Schwarzenegger announced his absurd commitment to hydrogen- powered vehicles, but it seems to be left out of the discussion in the mad consumerist rush for feel-good cars.

For a fraction of the cost of a hybrid, a Bay Area driver can get just about any diesel vehicle and run it on 99 percent recycled biodiesel, made from discarded vegetable oil, and full-synthetic motor oil. Few modern diesels require any modification whatsoever, and those that do simply need a few hoses and gaskets. Compare that cost with a $7,000 “plug-in kit” as described in the article. Biodiesel vehicles emit far fewer pollutants than traditional hybrids, and often average superior MPG, to boot. Right now, there is only one biodiesel station in Berkeley, but it is extremely convenient to get to from just about anywhere (and it’s a worker-owned cooperative; would you rather watch your electricity bill soar as you line PG&E’s pockets?), and there are several in San Francisco, as well.

I shed a petrol-free tear for Ms. Goulart as I ponder the total costs of her investment(s), as well as the cost to the environment by a potentially huge spike in electricity demand in the coming decade, due to green-wannabes who don’t see the big picture when they plunk down $30,000+ on a car dependent on coal fired and nuclear-generated electricity.

The “Trouble with Electric Cars” is not that we don’t have the proper electric infrastructure but that they help build a disastrous urban infrastructure.

Berkeley, home of supposed radical thinkers (radical from the root in Latin “radix” meaning “root”) should get to the root of this problem, but so far almost no one there seems to get it. The problem with any “better” car is that it produces the far worse city.

This is a point for whole-systems thinking that eludes almost everyone but is crucial to solving our problems at this time in history, even evolution, since the impacts of the built environment are enormous, direct, powerful, and extraordinarily destructive of climate, nature, and agriculture. The low-density development/car/paving/cheap energy infrastructure is a whole system of integrally related parts, not an aggregate of unrelated parts, and we’d better realize that the whole thing is pathologically dysfunctional and chuck it fast for what in some circles is called the “ecocity.”

We fixed the car once before, and I was living there at the time:

City of Lost Angeles ­lost angels because they couldn’t see where they were flying. We all wanted to get some good end point indicators established, such as clean air and healthy bodies so we could get back to our surfing in actual sunshine, drive to the beach in our woodies. So we fixed the car with the smog device. It really worked, too, knocking out about 95 percent of the smog.

So LA solved its local air pollution problem — and forty years later it gave us climate change. Remember? It was the leader, the city of high mobility, city of the future and the world followed. A month ago China passed the US in number of cars purchased. They are still following on the success of the better car, which is a victorious war that destroys its own spoils ­— a doubly bad and dumb deal.

Time to get real. The car is incorrigible. There is no such thing as a better car. A better machine gun just kills better. A better car just makes for more destruction. So it’s time to face that the house/car/paving/cheap energy system can’t work. The simple apartment near what you need and assisted by bicycles, transit, and good mixed-use design is the answer. Stop worrying about the car and think.

Kudos to Kirsty Evans’ profile on Angela Gossow of Arch Enemy and her intelligently written article on women in metal.

Gems such as this wonderful article pop up only once in a few years. Thank you for assigning her the piece and thanks to the East Bay Express for covering extreme and independent artists in the music scene.

Your editorial opposing Alameda’s Measure B was appreciated. That SunCal-designed ballot measure would have been disastrous for our island city.

However, I must protest your outrageous statement that “Measure A [is] a racist initiative designed to keep people of color out of Alameda by blocking the construction of less-expensive apartments and condos.”

Racist? So a low-density law is by definition racist? Please explain that to us. Is that because people of color love living in crowded apartment buildings? Or is it because all people of color are poor? Or maybe you think all poor people are racial minorities? Your statement begs for clarification, or retraction.

Since 1973, Measure A has kept Alameda an island of safe neighborhoods, quiet streets, and high home values. Even with the chaos of Oakland at its doorstep, Alameda has maintained excellent schools and low crime.

More importantly, Alameda has managed to do this as a culturally and racially diverse city. Alameda is actually more diverse than Berkeley!

How about doing some homework before throwing about the “racist” label?

I am a family law attorney in Alameda County, so I read “A Father’s Quest” with interest. In addition to representing parents in custody disputes, I am appointed by the court to represent children in high conflict custody disputes and I also sit as a Judge Pro Tem in family court.

I applaud the East Bay Express for its willingness to draw attention to the hugely important issue of child custody, and the decisions required from the courts, when parents cannot successfully co-parent.

From my perspective, the article completely missed the larger social issues that result in cases like “A Father’s Quest.”

As a society, we have failed in a significant way to teach many of the skills that might have helped the Tyberius’ parents resolve their own dispute, without the necessity of court intervention. We do not value communication skills, nor do we teach them in school. We do not, as a general rule, require parents to participate in parenting classes. We certainly do not teach any kind of conflict resolution skills, nor do many of our public role models emulate this kind of approach to problem solving. In other words, we do not use our social and financial resources to front-load social skills. Instead, we spend unjustifiable amounts of money on conflict and incarceration after the fact.

The courts spend far more money on criminal cases and juvenile cases than family law cases — which seems counter-productive. If we devoted more resources to families in crisis in the first place, by offering meaningful therapeutic interventions, mediation, and communication skills, we might have fewer criminal and juvenile cases. Family courts desperately need the time and resources necessary to work with parents, investigate the facts, consider all the available evidence, and render the best possible, informed decision to create a positive, constructive parenting plan.

I empathize with Tyberius. I know what it’s like to represent a child when the parents cannot communicate and are committed to the dysfunctional dance of conflict. When I have asked my young clients to imagine the proverbial three wishes, they consistently choose an end to the parental conflict over everything else.

From my perspective, the family law bench officers in Alameda County and the court-connected mediators are diligent, committed people who try very hard to make the right decisions. Their ability to achieve that result is greatly impacted by inadequate resources.

We should concentrate our resources to allow the family court to reach the most informed decision possible, to help parents understand childhood needs and development, to improve communication and problem solving skills and to give families in crisis the opportunity for meaningful interventions and mediation. We need to rethink the way we use judicial resources, and devote way more of them to give children their right to have a connected, safe, and healthy relationship with their parents.

Get Rid of the Mayor’s Seat

In my opinion, Ron Dellums has shown Oakland that it does not need a mayor. This city can be run and managed by an active city council and a city manager with the president of the council handling any signatory events. Dellums has wasted Oakland’s time and money. Oakland needs to shut down the office of mayor.

Also, Oakland is desperately in need of a fiscal manager and an attitude that it will not spend and overspend whatever revenue it takes in. Per the last census, Oakland employees were paid an average monthly take home pay that was the highest of ALL large cities in this country. This is totally irresponsible.

And, Oakland needs an ongoing public disclosure of the salaries, benefits, and pensions that it pays Oakland employees — these will prove to be unsustainable.

The people of Oakland need to vote down every new tax because all money paid in ends up being absorbed by the salaries, benefits, and pensions of Oakland employees and Oakland itself never gets ahead.

Bridging Cultural Gaps With a Snap