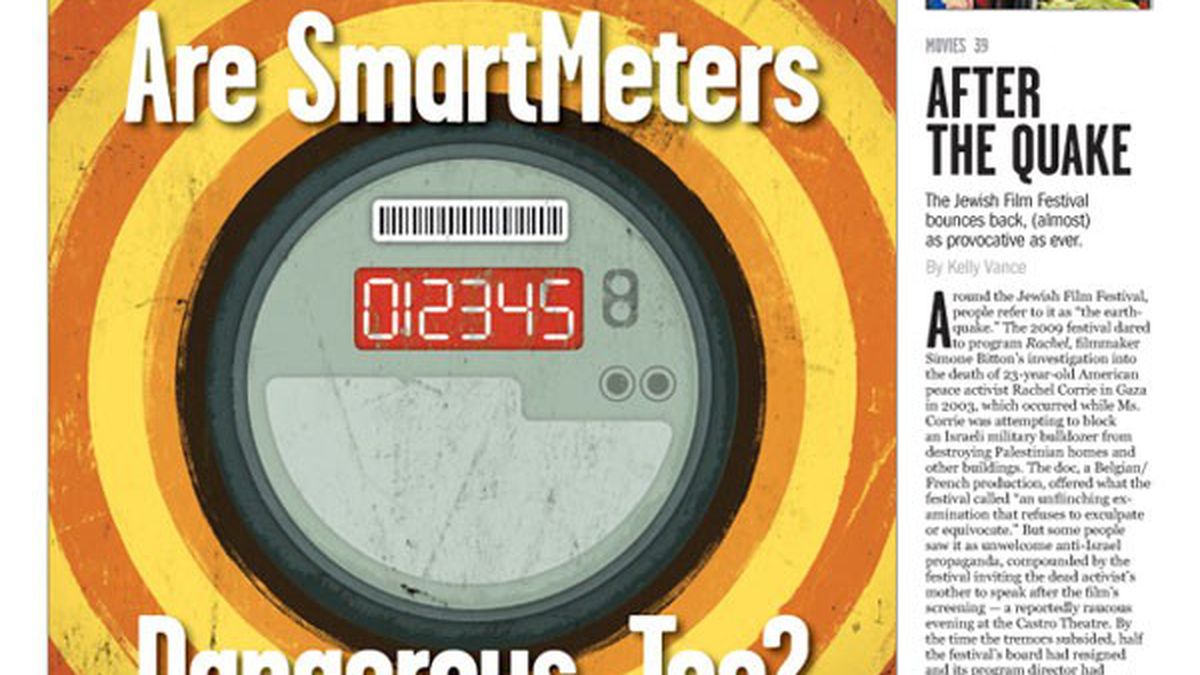 Readers sound off on the US penal system, our movie review, Jack London Market, indoor pot farms, and more.

Ms. Redmonde’s shrill manifesto, replete with SCREAMING CAPITALIZATION, harkens back to 60s/70s bullhorn politics, and makes me want to stop and consider her position as much now as it did then.

You should compare it with My life Inside (Mi Vida Dentro), another documentary, by Lucía Gaja, but on the American penal system. The story of a young Mexican woman, in jail for 99 years, accused of a crime nothing can prove she has committed. The film-maker could also film the trial, which is as surrealistic as this one. MiVidaDentro.com

It never ceases to amaze me, though it should; humans are sheeplike. Am I the only one who remembers or cares? The 1984 film Dreamscape? Director, Joseph Ruben. Catalogue: The Forgotten, The Good Son, Gorp, Joyride, Money Train, Return to Paradise, The Sister-In-Law, Sleeping With the Enemy, The Stepfather, True Believer. At the time, Dreamscape, was just plain fun. On the other hand, Inception, which will likely earn a ton of money, tries too hard and delivers too little; especially because I won’t even bother to see it.

Get the Market Started

I think that it’s pathetic that the developer would rather reap losses (that they surely can use for a nice write-off) rather than reduce the rents in order to get the market started. The main purpose for the market is to serve the area, and there has been a huge influx of residents into the Oakland downtown, Uptown, and Jack London Square area. The developer is falling down on their community opportunity, and waiting until their pockets can bulge. Money over true service to community. It sickens and saddens me.

This well-researched article catches what’s happening in the Square well. But there is one factual error — the name of the local organization serving residents and businesses is the Jack London District Association, not “square association.”

Transparent or translucent roofs give natural light while protecting from weather. I estimate that existing indoor grows nationwide consume electricity equivalent to 1 million tons of coal per year.

We Can Do This

Keep it small, keep it local. Consolidating the East Bay growing community would save energy! Open up a warehouse and rent out small areas where local farmers can utilize the overhead lights. It would certainly be difficult to coordinate but ultimately it would decrease energy consumption per unit weight, keep large companies from gaining control of operations, create jobs, and be the FIRST LIKE IT IN THE WORLD! We can do this Oakland!

In the story about Orukusaki in our July 28 issue, “Orukusaki Finds New Ammo,” we failed to state who shot the photograph. It was Joseph Schell.

In our July 28 Local Licks, we made two errors regarding the show by Generalissimo. It was on Thursday, July 29 at the Hemlock, which is located at 1131 Polk St. Apologies to anyone we led astray.

It certainly was a sickening, if predictable, show of grandstanding done by Jean Quan and Rebecca Kaplan during the Johannes Mehserle verdict protests. In one of the few instances Oakland residents get a little mileage out of our otherwise useless police force, they decide this is a good time to make Brownie points with the plebeians for the next election. It seems not to have been noticed by them that as city council members, it isn’t their place to protest the Establishment; THEY ARE THE ESTABLISHMENT. I just hope the voting public sees through this cynical display of crocodile tears and recognizes how phony they really are at election time.

On July 27th, I attended a press conference over which the mayor officiated. The mayor and the president of the city council announced a tentative agreement with the police union. The union agreed to ask its membership to pay 9 percent of its pension cost. The city agreed to ask the voters for approximately $350 in new taxes and to modify Measure Y so that another $250 dollars in taxes could be collected without having to meet the required goal of 803 police officers. Such a tax, and such a modification, if agreed to by the voters, would bring in $50 million per year in new revenue and $23 million per year in Measure Y funding.

The mayor talked a lot about framing choices. The mayor asked the taxpayers to respond to some false choices. The city administrator reported that the city revenues had been $490 million. The current revenues are $401 million. Our local government proposes to close the gap by asking the taxpayers to increase the amount of taxes they are willing to pay. The choices we are being offered are fewer police officers if we do not agree to increase the amount of taxes and modify measure Y. I think those are false choices.

As the mayor said, there is a need to frame the choices. I would frame the choices differently than our city leaders. If the city’s income is reduced by $90 million, the solution should be the same solution a private business or a household would apply. Reducing the size of the police force would not be an option. Reducing the cost of that police service would be an imperative.

Police service is an important and dangerous job. So is service in the Army, Navy, or Marines. Pay for either should be comparable. It is shameful that teachers are paid less than both. It is time to bring some sanity back into the ranks of public safety.

When the salaries and pensions of public officials were set, they were based upon a certain level of income, $490 million. We no longer enjoy that level of income. City income has been reduced by almost 20 percent. Rather than asking taxpayers, who also have reduced income, to agree to tax themselves to close the gap, why not reduce the cost of the services? Rather than ask taxpayers to reduce their income, why not ask government workers to reduce their incomes and pensions until the city can restore its fiscal health?

I was waiting for the 18 bus last night and 2 scheduled buses in a row failed to show up. Being more than 40 minutes late at this point, I gave up and went home. Of course, I did not assume anything unusual was going on, because AC Transit buses simply failing to show up is actually nothing unusual. In fact, if the drivers wanted to get some attention with unusual behavior, they would show up for work, make their stops on time, and treat riders with basic courtesy. THAT would stand out as something odd.

Most riders already believe that chronic absenteeism — apparently with little consequence — is standard operating procedure at AC Transit. It is absolutely staggering that the union representing these employees feels that it can avoid making the type of sacrifices that competent and reliable employees in all walks of life have had to make. The fact that drivers are shamelessly compounding their standard unreliability with this pathetic protest does nothing but ensure that even more riders become ex-riders and the pool of available funds for the bus system and transit employees dries up even further.

Friday Must Read: Occupy SF Declared a Health Nuisance, But Not...