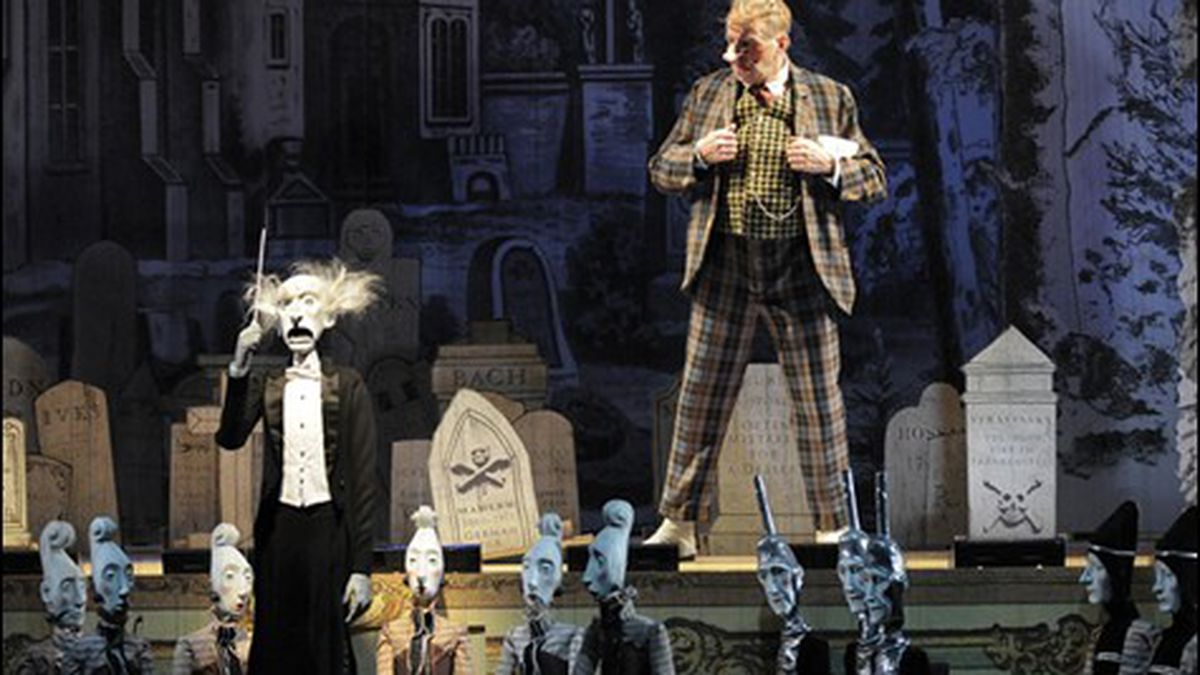 Rendering a children’s story as theater was a dicey proposition, even for Berkeley Rep Artistic Director Tony Taccone. The script relies on word play rather than character development. The sets demand boundless imagination. There’s always the risk of losing your audience when you lapse into magical realism.

And then there’s the central drama: a murder, albeit a facetious murder, which took place in the temperate and healthful environs of Berkeley Repertory Theater. A whole orchestra is implicated. A snoopy investigator (Geoff Hoyle) arrives with his magnifying glass in tow. No wonder Taccone wrote in the program notes that Lemony Snicket‘s The Composer Is Dead might be his most ambitious show to date.

That said, it’s also wonderful, in the way that children’s stories often are. Lemony Snicket is actually the nom de plume of local children’s author Daniel Handler, and the narrator of A Series of Unfortunate Events, which began as a collection of novellas and eventually spawned a film. At this point, Snicket is a cottage industry in his own right. He penned The Composer Is Dead as an educational who-dunnit. A composer is found slumped over his desk, quill pen in hand, rats gathered at his feet. Obviously, his killer lurks somewhere in the orchestra pit, says the investigator, who proceeds to cross-examine each instrument. Horns, flutes, reeds, strings, and drums all protest their innocence.

Originally commissioned by the San Francisco Symphony, Snicket’s Composer is very much in the style of Peter and the Wolf. It began as a simple monologue (delivered by Snicket) with an orchestral score by Nathaniel Stookey, which provides a unique leitmotif for each instrument. The whole point was to get children interested in classical music. Naturally, Handler peppered the libretto with all variety of funny Handlerisms — e.g., “Cadenza: A word which here means, ‘fancy solo part.'”

So the onus was on Taccone to turn a children’s play into something that adults might also enjoy. That’s certainly not impossible, given the number of grown-ups who still watch Sesame Street and The Muppets. Indeed, the best children’s shows have several layers of sophistication. So does Snicket’s Composer, with its smattering of pop-culture jokes about everything from PG&E to the state of Vermont.

Berkeley Rep has had a fascination with puppets, lately, and they’ve appeared in several recent plays — most notably Compulsion, in which Sid Silver (Mandy Patinkin) engaged in long dialogues with a marionette version of Anne Frank. In that case the puppet was a symbolic device. Composer is far more literal. The entire orchestra consists of puppets, and all of them look exactly like their instruments. The violins are long and stringy. The percussionists are big and round, with xylophone coats and tawdry sombreros. The brass players have lumpy horn heads, while the oboes are slender and reedy. The French horns wear sailor shirts and speak with French accents.

Snicket reconceived the show for Berkeley Rep with the assistance of Jessica Grindstaff and Erik Sanko, directors of the New York theater company Phantom Limb. Its current iteration has three parts. It starts with a rather long-winded preamble, for which Hoyle emerges in a conductor’s suit and clown face paint, sock puppet in hand. He prattles at length about “the thea-tuh,” addressing the audience directly and promising us a “wonderous” musical interlude from “the world’s greatest living composer.” What follows is a surrealist animated film (produced by Martin Rosenberg) in which Hoyle, the charming host, travels backstage to see what’s behind “the magic of living, breathing theater” (an oft-repeated phrase that’s also the title of the first act). Instead of magic, he finds a crew of scatter-brained, obstinate, socially maladjusted puppets. Among them are a lighting technician who looks like a crocodile, and a concessions vendor who sprays tear gas.

Such visual flourishes are the meat and potatoes of Composer. The set, designed by Grindstaff and Sanko, is a pop-out book that keeps unfolding. Behind the first curtain is an orchestra pit with a fake proscenium stage. Behind that, a ballroom where cut-out dancers wheel by in waistcoats and Edwardian gowns. Behind that lies a perfectly manicured English garden. And then, at last, there’s an old graveyard filled with tombstones of famous composers: Bach, Beethoven, Haydn, Brahms, Chopin, Mahler, Stravinsky, Schubert, Prokofiev.

At 65 minutes long, with no intermission, Lemony Snicket’s Composer is a bizarre but visually arresting play. It’s driven by gags rather than narrative, but so are most children’s books, when you think about it. Hoyle is majestic, both as the charming host and crime-solver. Arrive with a child’s sense of wonderment; don’t go if you can’t stomach a lot of ooh-ing and aaah-ing from the audience.