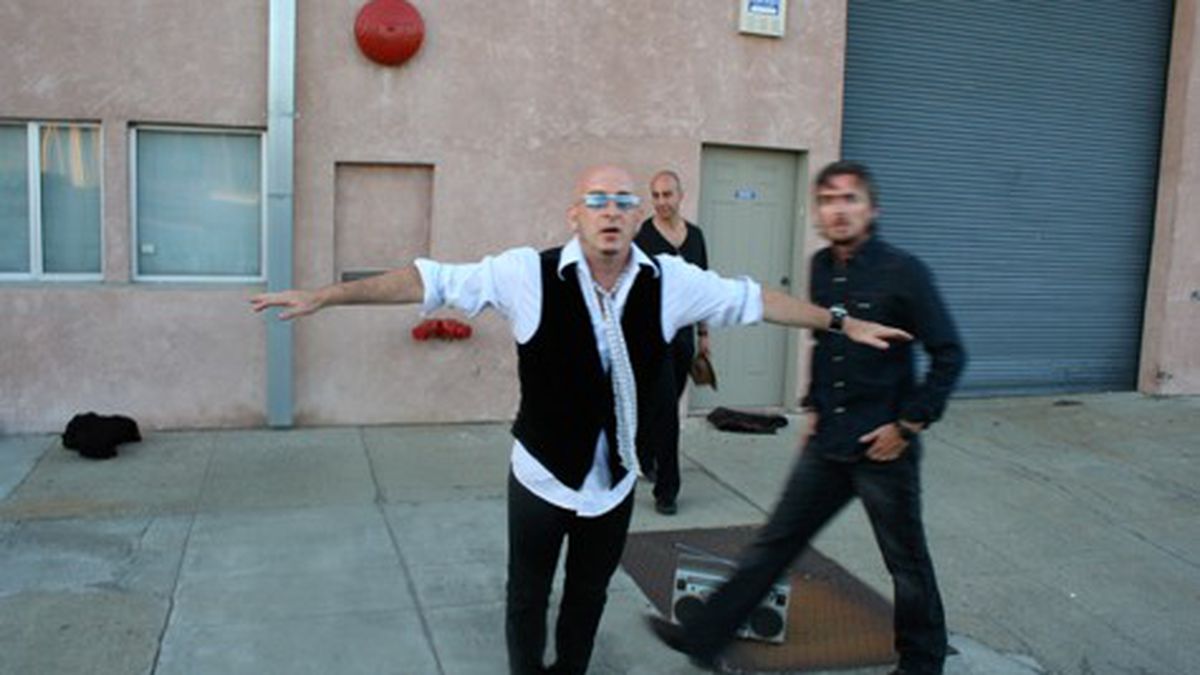 Only the glow of dashboard instruments illuminates the faces of four twentysomethings as they maneuver their SUV through bumpy forest roads in the dead of night. As the precocious hipsters argue glibly about the purpose of their mission, a tinny voice croons from the stereo speakers, backed by a quick bass line: I was down in London, searching for some fun …. Through the grainy, neon-green lens of night-vision glasses, we see the scene they are approaching — a dozen werewolves lounging in human form around a campfire. I was looking/for a place/that I might dance.

If you’re up to date on this season of HBO’s True Blood, you’ll recognize this eerie, adrenaline-pumping scene from Episode 3, which aired on June 30. Bay Area indie-rock band L’Avventura wrote and recorded the song “7 Discos of the World” that provided the soundtrack to the vampire-curious youths’ risky late-night escapade. Even though the characters didn’t get to the song’s explosive pop-rock chorus before their showdown with the werewolves, that didn’t prevent thousands of True Blood fans from rushing to L’Avventura’s website to download the track from iTunes.

“There’s a really big cult community around True Blood,” lead guitarist Fergus Griffin told me while lounging with lead singer Jeff Davis and producer Bond Bergland in the North Berkeley studio where the band recorded the song. Griffin, dressed in suede boots and tapered jeans and sporting a trim goatee, said the band’s website traffic went up tenfold the day the episode aired. “People are still talking about it,” he said.

Getting ten seconds of airplay on a major TV drama is a good break for an indie band like L’Avventura — the project of veteran rockers Davis and Griffin, who are backed by bassist Aldo Silver and drummer Michael Urbano — and may be the best shot, besides touring, that independent musicians have these days of establishing a fan base and getting paid. Artists can earn much more in mechanical royalties for replays on television and film than they can from internet radio companies like Pandora or Spotify — which mainly offer new artists increased exposure. Davis said that, with hundreds of new shows coming out annually that feature original music, the gatekeepers have shifted in today’s commercial music landscape.

“It’s the new hit record — getting on television,” said Davis, who wore a snug henley, Ray-Bans, and a polka-dot neck scarf as Belle and Sebastian played on the sunny patio of the Fellini Coffeebar, a popular North Berkeley cafe he has operated since 2003. However, Gary Calamar, the music supervisor for True Blood and a longtime friend of Davis’, said over the phone from his home in Los Angeles’ Laurel Canyon that success in this realm is not always so meteoric. “A song placement can be just a stepping stone to one’s career,” Calamar said. “I wouldn’t necessarily call it a record deal, but a very nice break.” Still, he noted the success of Sia’s epic ballad “Breathe Me,” which aired prominently during the heart-wrenching season finale of Six Feet Under (Calamar was music supervisor for that show as well). The song became wildly popular and helped launch Sia’s career.

Calamar remembers first becoming aware of the role of music supervisors while watching The Wonder Years in the late 1980s and being deeply moved by the Sixties-era songs that played prominently in the show. It was also in the late Eighties that Miami Vice was breaking ground by using original, contemporary pop songs rather than music created by studio musicians. L’Avventura producer Bergland, who has played in the pioneering industrial-rock band Factrix for thirty years, remembers a significant shift in 1999, when the bluesy theme song for HBO’s The Sopranos initiated a new generation of music in television, prioritizing the role of devoted music supervisors over A&R reps.

Calamar, who also oversees music for Showtime’s Dexter and has five Grammy nominations (for Six Feet Under and True Blood), said that he finds original music everywhere: “I receive music from record labels, publishers, artists, managers; I check out my colleagues at KCRW [the local college radio station]; I read music blogs. Yesterday at the Hollywood Farmer’s market, a guy gave me a CD — truly!” Calamar said that HBO, in particular, understands the power of music in its productions. “They provide an atmosphere where a show’s creator can follow their vision without too much interference from the network,” he said. “So if, say, [writer] Alan Ball wants to use a good deal of music in True Blood, HBO will provide an appropriate budget to license the songs. Most networks are more budget-conscious than music-conscious.”

Even though music supervisors are constantly on the lookout for songs to fill out hit shows, it helps to have a foot in the door to start. Davis met Calamar long before HBO’s breakout dramas or even the winsome charms of The Wonder Years — back in the early 1980s when both were just getting their footing in the Los Angeles music scene. Davis applied for a job at a Santa Monica record store Calamar managed, and the two hit it off right away, debating the influence of seminal Sixties rock bands The Troggs and The Amboy Dukes. Calamar went on to manage Davis’ avant punk-folk band The Balancing Act, which produced three albums with I.R.S. Records and became successful on the college radio circuit.

More than two decades later, in 2007, Davis’ new band, L’Avventura, had released its first album of lush, melodic rock songs, Your Start Was Shining, to local acclaim in the Bay Area, and Calamar was working on the show Weeds, which played a version of the Malvina Reynolds song “Little Boxes” over the opening credits each episode. Calamar asked Davis and Griffin to cut another version of the song, though it didn’t make it onto the show. A few years later, Calamar was looking for a cover of The Zombies song “She’s Not There” for True Blood, which uses a song as the title of each episode. Within two weeks, Davis and Griffin had each recorded a version of the song in their home studios — Griffin cut a fast-paced, slide-guitar-heavy version, while Davis’ cover had a swampy, trip-hop vibe. Calamar liked Davis’ version, but the song was bumped by a growling, ethereal cover by Nick Cave and Neko Case. “Nick Cave has more vampire credibility than us,” Davis joked. Still, L’Avventura’s trip-hop version of “She’s Not There” was included as a digital bonus track on volume three of the True Blood soundtrack.

Then, earlier this year, Calamar turned to Davis and Griffin with a new request: original material. The band had been working on a more raw, wild sound as a return to Davis’ Detroit garage-rock roots, and sent along “7 Discos of the World.” Calamar loved it, and when the late-night werewolf hunt scene presented itself in the episode “You’re No Good,” he knew the song was the perfect fit.

“When they round up the music for the next soundtrack, who knows what will be on it,” Griffin mused. “But the community will talk about what they remember and what they liked.” For now, L’Avventura plans to keep rolling out new tracks on iTunes every couple of months, ready for the next time Hollywood comes calling.