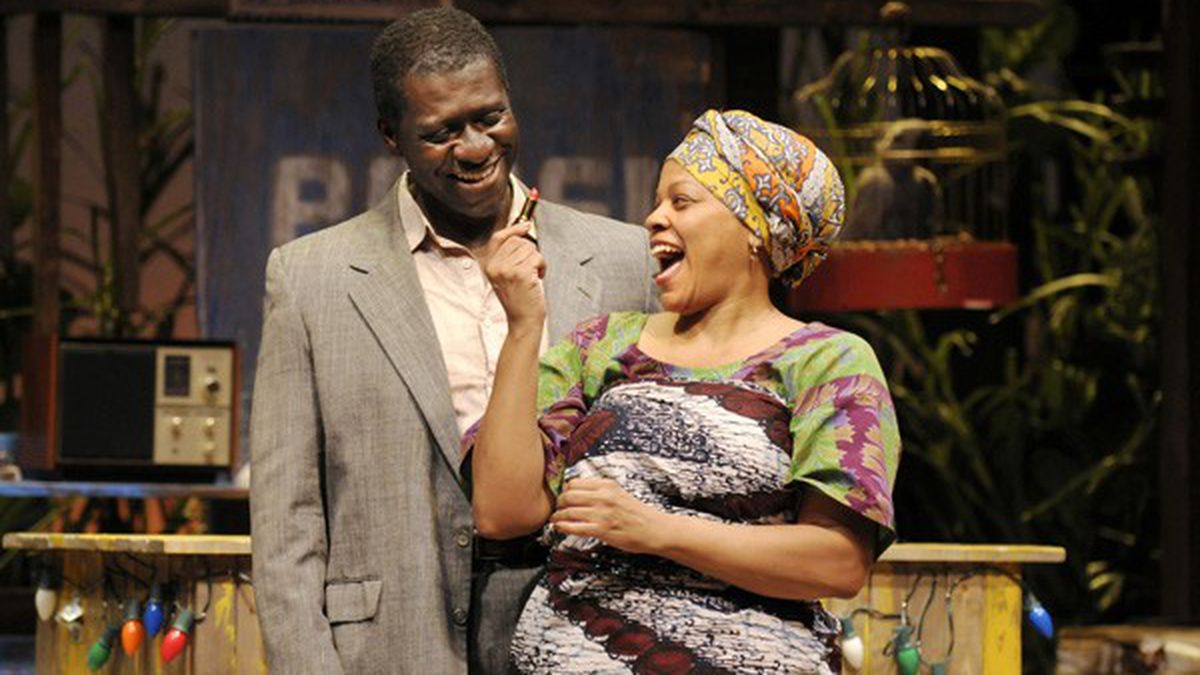 New play at Berkeley Rep depicts rape as a form of warfare.

Orange Fanta and whiskey serve as magic elixirs in the Congo — or, at least, in a part of the Congo imagined by playwright Lynn Nottage, whose new work, Ruined, takes place in a small mining town brothel. Run by brassy, no-nonsense matriarch Mama Nadi (Tonye Patano), it’s an outpost in a country desecrated by civil war. Nadi boasts the coldest Fanta for 25 kilometers, and the only pool table for 50 kilometers. She holds court like a stern disciplinarian, demanding that her customers hand over their ammo upon entering. They place the empty guns in a bucket by the bar, the same way a theater patron might stash a wet umbrella. Nadi’s bordello is, in its own way, a safe haven.

And Nadi, for that matter is a feminist, even though she makes a living selling other women’s bodies. The justification is that most of these women are refugees who would rather stay in a shelter with beds and regular meals than serve as concubines for or be raped by soldiers. That’s a little discomfiting, as is the idea of learning about the Congolese war in an entertainment venue. And yet, Berkeley Rep has never shied away from “edutainment,” and neither, apparently, has Nottage, whose desire to “tell the story of war, but through the eyes of women,” was the impetus for Ruined. (In interviews, she’s also characterized the play as a modern adaptation of Bertolt Brecht‘s Mother Courage.) She and director Liesl Tommy traveled to East Africa in 2004 to interview female war victims, who served as models for her characters.

Rape has always been used as a weapon in war, but it’s particularly virulent in the Congo, as Nottage discovered. Recounting her experience as an investigator and researcher, she said the word was used so often that it became as banal as it was oppressive. One of her interviewees, a woman named Salima (played by Pascale Armand in the production) was kidnapped from her home and gang-raped by five soldiers. Others were tortured, beaten, and mutilated. Their children were sequestered, their husbands imprisoned, their villages razed. The term “ruined,” used cryptically in the play, refers to the desecration of a woman’s genital area with a bayonet. That’s never fully explained, but Mama Nadi drops a hint early on, tracing the shape of her own womb as she inquires about another woman.

The woman in question is Sophie (Carla Duren), a small, bird-like creature who awakens some kind of protective instinct in Mama Nadi. Sophie is “ruined,” according to her uncle Christian (Oberon K.A. Adjepong), the traveling salesman who fetches provisions for Mama Nadi, including Belgian chocolate and lipstick. Although Sophie’s back story is never fully disclosed, Duren conveys all the necessary information by having the character walk with a pronounced limp. Mama Nadi spares Sophie the dirty work, allowing her to tend the bar and sing for customers, instead of seducing them. Such compassion reveals more about the matriarch than it does about Sophie. For all her sternness, Nadi clearly empathizes with the women she employs. And, like them, she bears the hint of some past wound.

Thus, the brothel maintains a perilous equilibrium. Soft drink logos, AIDS ribbons, Christmas lights, and other debris clutter the brothel, which is surrounded on all sides by thick bushes and trees. Conceived by scenic designer Clint Ramos, it’s both a feminine space and an appropriated space, but it also reflects the deteriorated state of the country. There’s a little dormitory at stage right where the women read romance novels and paint their fingernails. On the other side lies the bandstand, lit up by a glimmering disco ball. The open space between serves as a dance floor, where Salima and a prostitute named Josephine (Zainab Jah) hustle the clientele.

Occasionally, the dance sequences become part of the drama, as Salima and Josephine have to rescue one another from overzealous customers. Nor is the brothel inured from all the violence outside. Members of different armed factions infiltrate the bar and stage their own war within its walls. Rebel leader Jerome Kisembe (Wendell B. Franklin) brandishes a machete and points it menacingly at Mama Nadi’s neck. His arch enemy, the sneering Commander Osembenga (Adrian Roberts), is the play’s unequivocal villain. In one scene, Osembenga subjects Christian to an army-style hazing. The salesman is forced to drink glass upon glass of whiskey, until he’s dizzy with alcohol poisoning.

Yet amid all those violent moments are some tender parts, too. Salima’s husband, Fortune (Jason Bowen), arrives to rescue his wife, and waits for two days in the rain while Salima hides in her room, questioning his intentions. The flirtations between Christian and Mama Nadi suggest that he’ll eventually crack her hard shell. And then there are Sophie’s songs, which seem purposefully designed to transmit messages about the war outside. Life’s a green mango, plucked too soon, she sings, in a preternatural alto. Taken in context, the song could be about death, or a land ravaged by war. Or a woman’s body.