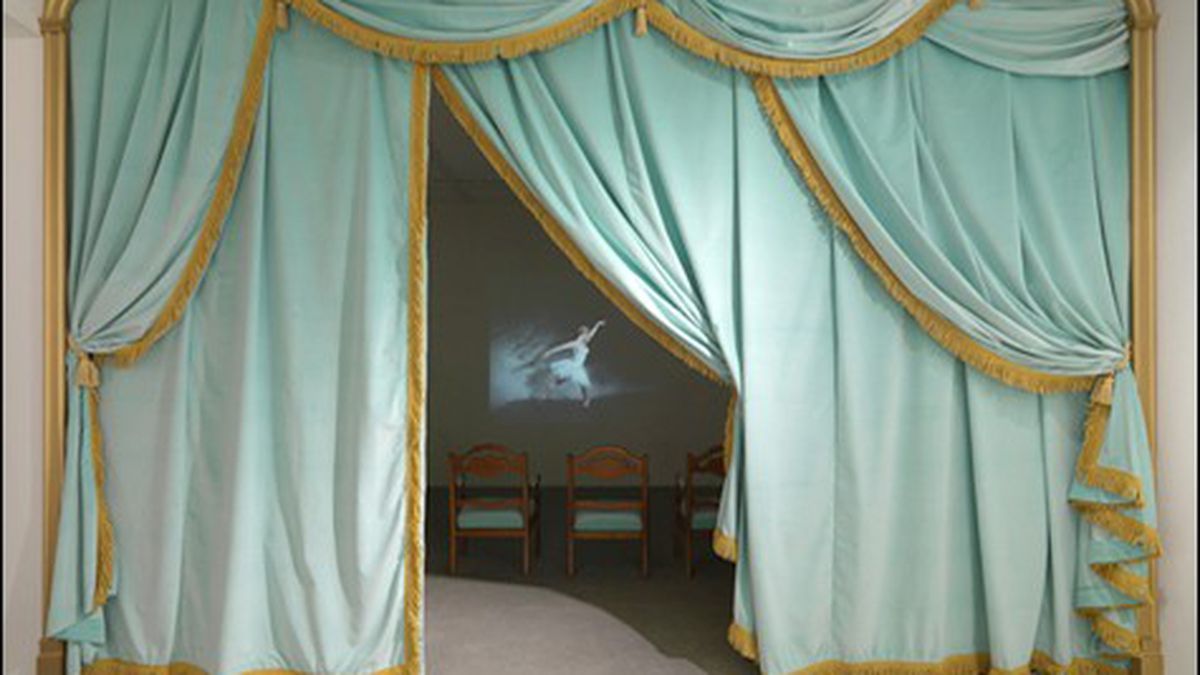 Rigid in its conventions and intimately known to a small fraction of the population, classical ballet tends to seep into the mainstream obliquely — diffracted by other art forms like film, where the disturbed ballerina remains a favorite figure — or invisibly, its narrative tropes appearing without credit.

For contemporary artist Karen Kilimnik, the world of historical theater has been a longstanding point of fascination. Since her career took off in the late 1980s, Kilimnik has run the gamut from photography to painting to scatter installation, probing questions of appropriation, identity, femininity, and celebrity. All of these themes converge, repeatedly, in her balletomane impulse. This makes Dance Rehearsal: Karen Kilimnik’s World of Ballet and Theatre, now running at the Mills College Art Museum, a wonderful point of entry into the internationally acclaimed artist’s fascinating practice.

Kilimnik approaches ballet from a staggering number of angles — testimony, no doubt, to the force and vitality of her obsession. In this exhibition, along with dozens of paintings depicting Romantic ballet sets and wistful, long-lashed dancers, there is a crayon rendering of the Paris Opera House’s seating layout, a tongue-in-cheek installation literalizing the phrase “opera rats,” a reprisal of a work from Edgar Degas’ famous ballet series, text reproduced by hand from legendary dancer Rudolph Nureyev’s memoirs, and, finally, video of a ballet that Kilimnik herself choreographed.

Operating with the unique impunity that contemporary art provides, Kilimnik glides in and out of classical ballet’s innermost parts, visually referencing specific moments in specific dances, as well as its most peripheral extremities, as with a drawing juxtaposing Nureyev and Leonardo DiCaprio, who played Romeo — one of Nureyev’s most famous roles — in a 1996 film adaptation of Shakespeare’s play.

It is as if Kilimnik is riddling ballet’s insulating shell with the hopes of ultimately climbing inside. Indeed, one of the more intriguing works in Dance Rehearsal is a blurry portrait photograph that Kilimnik took of herself, then marked over in black ink to transform her own likeness into that of Gelsey Kirkland, the drug-addled, heartsick Balanchine-era ballerina.

Kilimnik has no doubt succeeded in entering the world of ballet, loosely construed. She created scenic backdrops for the Paris Opera Ballet’s 2011 production of Psyche, while Sleeping Beauty and Friends — the pastiche of four 19th-century ballet excerpts that she co-choreographed with Tom Sapsford — ran a single night in London (Kilimnik’s video of the event plays in the back of the MCAM gallery, behind silk curtains).

Like the Sherrie Levines and Cindy Shermans who came before her, Kilimnik has successfully harnessed the freeing potential of contemporary art. Through her sights, boundaries between artists and their respective worlds begin to dissolve.

Facebook
Twitter
Linkedin
Previous articleFormer D.E.A. Chief in Houston: Legal Marijuana Is ‘A Matter of When, Not If’
Next articleMid-Week Menu: China Village, Grease Box, and James Syhabout’s New Restaurant