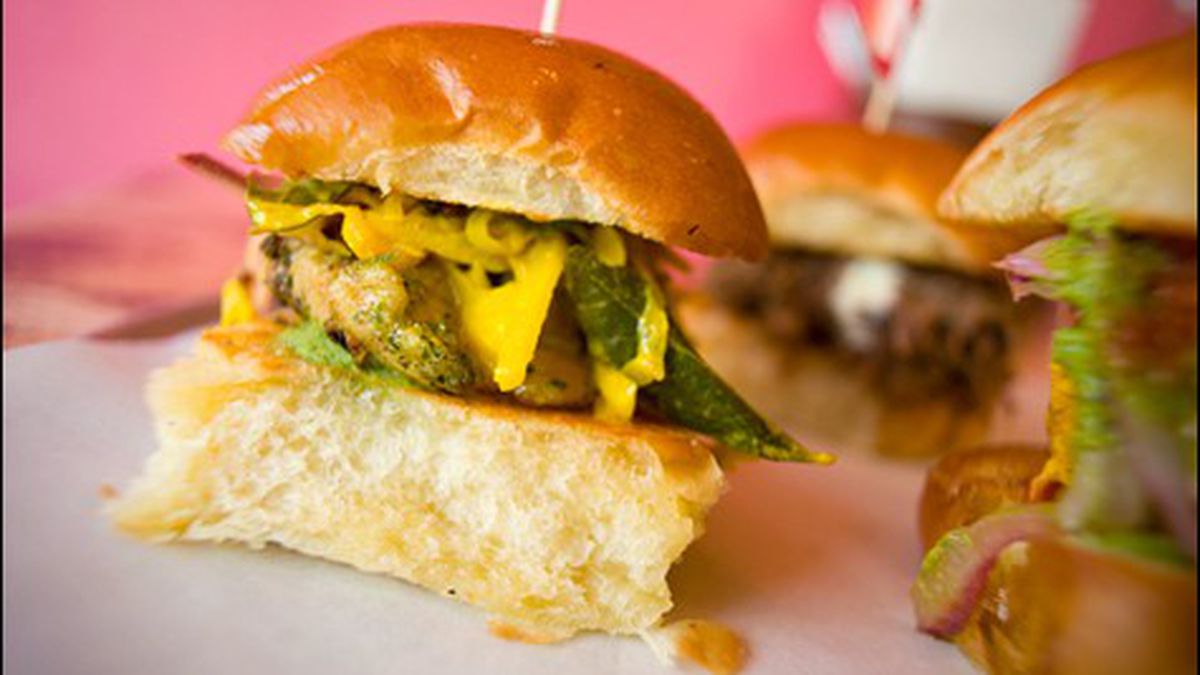 Juhu Beach Club’s Street Food Is Worth Sitting Down For

In declaring his abiding love for street food, the great Calvin Trillin once wondered if, “through some rare genetic oddity,” his sense of taste only could operate at full strength while he was standing up. I feel the same way: Few sit-down dining experiences offer the pure hedonistic pleasure derived from, say, digging into a steaming pork-and-masa wonder while leaning against a car parked in front of one’s favorite tamale shop.

Of course, the corollary to this theory is that something gets lost in translation when street food is served in a sit-down restaurant setting. Enter Juhu Beach Club, a new restaurant in Temescal that specializes in Indian street food. With its bright-pink paint job, funky wallpaper, and hipster clientele, the restaurant isn’t anyone’s idea of a bougie white-tablecloth joint, and chef-owner (and Top Chef alum) Preeti Mistry gives the place celeb cachet to boot. But, as the Express recently reported (see “Street Food Grows Up,” 3/27/13), the restaurant has incurred the wrath of some street food enthusiasts for high prices and a supposed lack of authenticity.

I’ve never eaten pav bhaji on the streets of Mumbai, so I won’t venture an opinion as to whether Mistry’s version is better or worse. But I will say this: I thought both of my meals provided fair value — for the high-quality ingredients; for the friendly service; for the fun, festive atmosphere. Ultimately, Juhu Beach Club joins a handful of places that are standard bearers for the Oakland food renaissance — hip, casual restaurants serving food that’s steeped in tradition but feels thoroughly modern.

The restaurant’s inspiration, Juhu Beach, is a neighborhood in Mumbai legendary for its street food scene. Mistry, whose family hails from Mumbai, said it was always her favorite neighborhood to visit when she was a kid, but she isn’t trying to replicate dishes exactly as they were prepared by those street vendors — though she isn’t exactly serving “fusion” cuisine either.

Take the dish Mistry has dubbed Mom’s Guju Chili, which is really her mother’s recipe for moong dal, a traditional Indian mung bean soup that does, in fact, bring to mind a bowl of chili — especially topped, as it is, with a dollop of yogurt. I’m no moong dal connoisseur, but as far as vegetarian chili goes, Mistry’s soul-warming version is tough to beat — the use of mung beans yields a delicate, less-starchy texture.

Juhu Beach Club is best known for its variations on the street-food sandwich known as the pav — India’s answer to the slider — which Mistry serves on a custom Starter Bakery bun (something like a buttery Parker House roll). These are filled, variously, with tender beef short rib (the “Holy Cow”) or perfectly grilled green-chili chicken (the “Chowpatty Chicken”). My favorite was the vada pav, a genuine starch-on-starch masterpiece: Inside the bun was a fried potato puff, pickled red onions, and a sweet tamarind chutney spiked with the heat of ghost chile. Savory, spicy, sour, sweet, crunchy, and feather-light — all of that and more in one flavorful, well-balanced little package.

Meanwhile, Mistry’s gujarati-style samosas are among the best I’ve eaten. The pastry wrappers are thin and super-crisp, and she mashes the pea-and-potato filling by hand, resulting in a texture that’s more like potato salad than mashed potatoes. (Unfortunately, these are so labor-intensive that Mistry is taking them off the menu temporarily, at least until she’s able to train one of her cooks to help make them.)

The most “fusion-y” appetizer was the Buffalo-inspired “Vindaloo” chicken wings, served with blue-cheese raita (yogurt sauce). This was probably the least successful dish — but only because the wings were difficult to eat and because the chicken was overcooked.

Man cannot subsist on street snacks alone, and it turned out that some of the best dishes at Juhu Beach Club are the hearty entrée-size curries, which are served over fragrant lemon rice. One featured a whole chicken leg marinated in fresh turmeric root and slow-cooked on the bone until meat and skin practically melted into the sauce. Mixed with a dollop of the house-made cucumber raita, this was comfort food, pure and simple. Even better was a dish of perfectly cooked Curryleaf Coriander Shrimp, a showcase for sweet peas; earthy, surprisingly tender curry leaves; and a light, but full-flavored, tomato sauce.

Among the wide selection of house-made beverages, my favorite was the Sassy Lassi — a mango lassi with a slightly salty, decidedly grown-up kick. Straus soft-serve ice cream served with your choice of toppings and syrups (I loved the chai-spiced candied pecans and the sweet-and-sour passionfruit syrup) makes for a light, sweet ending to your meal.

As tasty everything was, I can see why the restaurant might have detractors — people who’d argue that the food is too Americanized or “dumbed down.” Although I disagree with that assessment, I wouldn’t, for instance, categorize any of the food as “Indian spicy” — and dishes like the Guju “chili” and the chicken curry could have used more searing heat. On the other hand, Mistry’s pickled green apples had a sweetness, and a refreshing quality, that’s missing from the more pungent pickles served at traditional Indian restaurants.

To me, these are matters of preference, not authenticity. Mistry said she wants to make Indian street food accessible to the American palate — which is to say, to cook dishes that please her own palate. After all, she grew up in America and trained at the Cordon Bleu. Why shouldn’t those experiences inform her cooking?

By the time this story goes to press, Juhu Beach Club will have launched lunch service, featuring, among other offerings, “deluxe”-sized pavs ($9). And, although I found eating at the restaurant to be a delight, I look forward to buying one of these bad boys and inhaling it by the time I’ve finished walking back to my car.