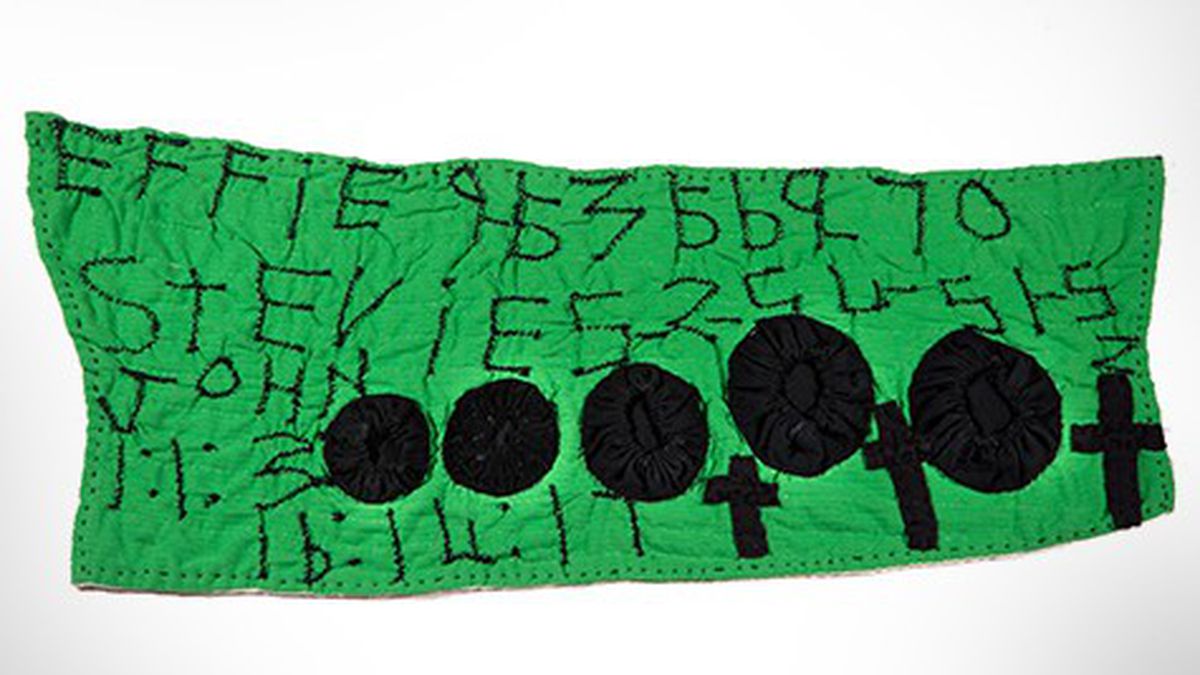 Yo-Yos & Half Squares showcases the improvisational quilts of the acclaimed Rosie Lee Tompkins and other Black artists.

Eli Leon’s quaint house in the Temescal district of Oakland is filled from floor to ceiling with quilts. He is one of the country’s preeminent contemporary quilt collectors, with a specific interest in improvisational quilts made by African-American artists. Rather than following the tradition of creating symmetrical patterns, these artists piece together compositions reminiscent of abstract paintings — like a Hans Hofmann piece in textile form. Leon is a proponent of quilts as an expressive art form to be valued on the level of fine art, as is Carin Adams, the associate curator of Art and Material Culture at the Oakland Museum of California (1000 Oak St.), where her selections from Leon’s collection are now on view in the show Yo-Yos & Half Squares: Contemporary California Quilts.

Rather than simply building a collection, Leon built a network of relationships with local quilters, acting as both a nurturing patron and a friend. One of those quilters was the late Effie Mae Howard, more commonly known by her quilting name, Rosie Lee Tompkins. Leon met Tompkins at the Marin Flea Market in 1985, where she was selling housewares. The two got to talking. Tompkins was an extremely private mother of five who lived in Richmond, worked as a nurse, and had been making quilts since she was a young girl growing up in Arkansas. Leon convinced her to invite him over to see her work. He left that first visit with a gem in hand: a large, velvet quilt top made from boldly mismatched black and red squares that was lying on her floor, being used as a blanket by her dog. Over the years, the two became dear friends. Tompkins came to be recognized as a nationally acclaimed improvisational quilter — largely thanks to exposure from Berkeley Art Museum director Lawrence Rinder. Leon now has the largest collection of her work.

Tompkins’ quilts are the standout pieces in Yo-Yos & Half Squares. Her work is exuberant, matching shapes and patterns like an ecstatic churchgoer channeling God. Indeed, Tompkins was a devout Christian, and regarded her quilting as a form of spiritual expression. Her smaller pieces — much too small to be used as a blanket — make it clear that, although she learned to quilt out of necessity, her art was no longer utilitarian once her career began to bloom.

Her most memorable piece in the show is an unevenly cut kelly green quilt only a little more than one foot long and three feet wide. In bold, black, Basquiat-esque lettering, Tompkins crudely embroidered her given name, a series of numbers that were likely her address, the name of one of her sons, and a biblical reference. Five black Yo-Yos — scrunched, round pieces of cloth usually made as a practice template for sleeves — punctuated with three thick, black crosses. The piece is both vibrant and melancholic. Most of all, though, it feels honest — not entrenched in any particular aesthetic canon. It’s obvious to note that Yo-Yos & Half-Squares defies the distinction between “art” and “craft,” proving that quilts are a valuable fine art form. But the pieces themselves don’t seem steeped in the desire to achieve that categorization. Rather, these quilts strip “craft” of its kitschy connotations, elevating the medium to its most expressive capacities.