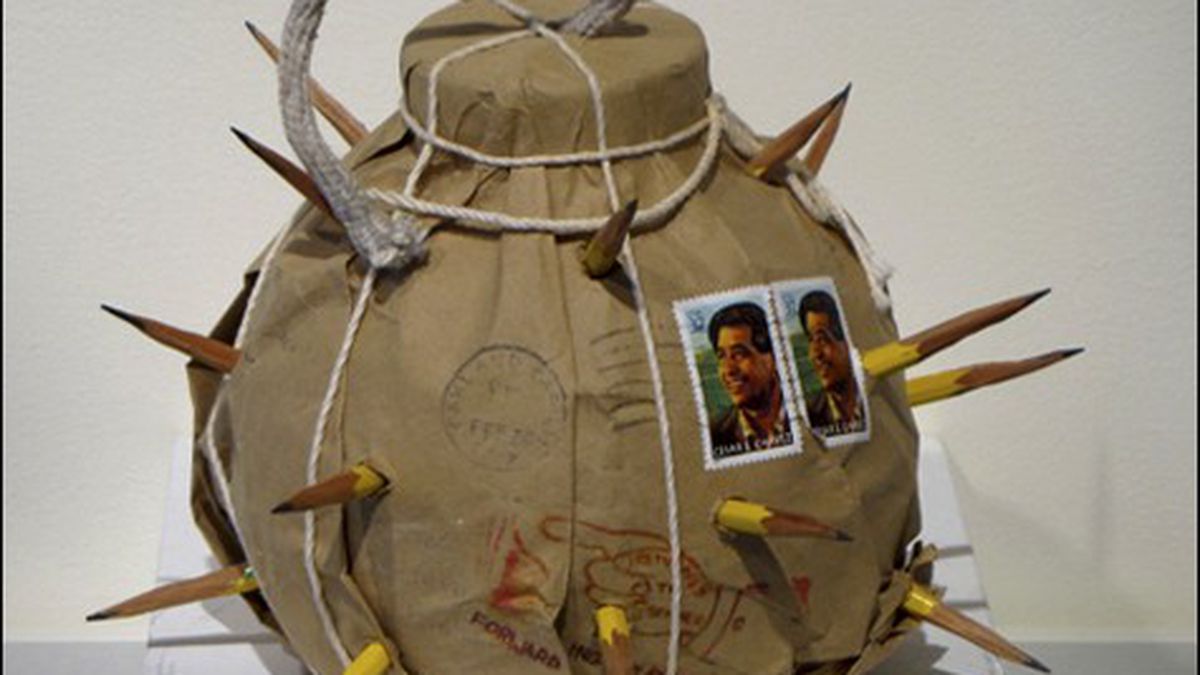 James Shefik Is Armed and Dangerous

We Americans fancy ourselves rugged individualists, but our hysteria after 9/11, fanned by political opportunists, gave the lie to that mythology. We got weak knees, trusted authority blindly, and went on with our getting and spending. (Cops, firefighters, and soldiers are exempt, of course, from this capitalist self-criticism.) Judging by our current political theatrics, many of us still hooked on fear — and newly sanctified tea baggers with their dubious baggage are not excepted. In I Am Not an Army, sculptor James Shefik parodies or deconstructs the narcissistic “Army of One” ad campaign (as painter Ryan Pierce did with his 2008 “Army of No One” show). Examining how war is sold to us, and what buying into it does to us, it is sculptural/spiritual analogue to Why We Fight, Eugene Jarecki‘s documentary film on the Military-Industrial Complex and the old fear/faith cycle.

Fortifications and weapons combine to symbolize our beleaguered state of apprehension and aggression. “Thornbox” is a two-story architectural model, with each stepped, pierced facade resembling a floor plan, albeit studded with wooden spikes; inside sits a single chair. “Pretty” reverses the idea, covering the mazelike structure with tiny chairs in every orientation; the tiny multiple-gravity world is encased within a fur-lined trunk. “Workin’ Hard” (remember Bushisms?) is a visual paradox: An anvil, somewhat resembling a stylized animal, sits atop a fragile lawn of red-tipped wooden matches (all fabricated by Shefik, who apparently likes working). The anvil form recurs in “Insomnia,” though here in miniature, topping the surface of a globelike sphere covered with string meridians, this odd projectile stuck to a small striped mattress that is inclined like the arm of a tensioned catapult. The wooden matches reappear in “Worship,” a warship icon rendered in blackened, burned match heads. Three anarchist-style bombs, spherical, with fuses, comment on the merchandising of war: “#1” is a spherical package wrapped in brown paper, stamped as if mailed (remember letter bombs?), from which sharpened pencils protrude or explode; “#2,” a globelike cage, houses lottery-numbered ping-pong balls inside; and “#3,” in pink and magenta camo patterns, sits on a satin pillow — freedom fashion for the My Little Pony set. Reminiscent of Muybridge’s photographic motion studies is “9,” with multiple/multiplied B-52 bombers (Dr. Strangelove vintage, still around) flying before a diorama sky — and flapping their wings as descendants of Leonardo’s ornithopters. I Am Not an Army runs through October 3 at Autobody Fine Art (1517 Park St., Alameda). 510-865-2608 or AutobodyFineArt.com