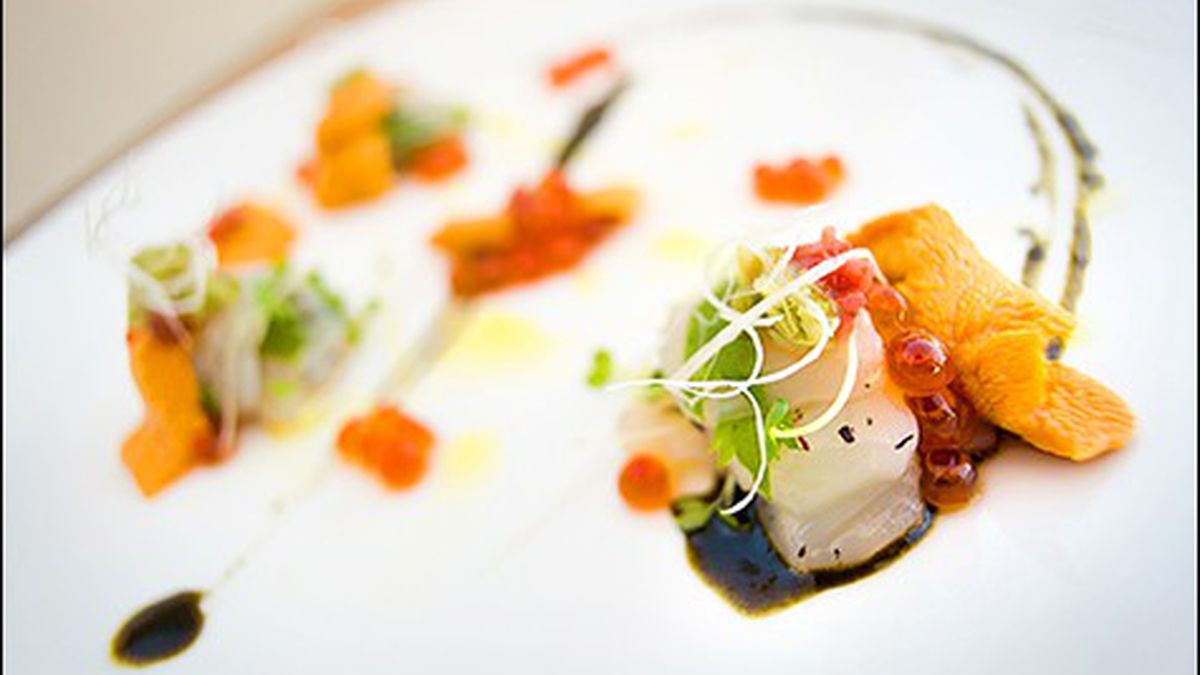 Iyasare and the Essence of Umami

The new Fourth Street restaurant serves some of the most gorgeous Japanese dishes in town, but the flavors are what linger in the memory.

At Iyasare, the new Japanese restaurant in Berkeley’s upscale Fourth Street shopping district, some of the dishes look almost too pretty to eat: thin curlicues of beet-cured ocean trout the color of raw steak are topped with a tangle of crispy, herbaceous things; steamed clams come with dried-konbu shavings draped over them like the straggled ends of a fisherman’s net; a raw-seafood plate featuring sea urchin, Hokkaido scallops, and ikura resembles an abstract painting, all vibrant oranges, greens, and golds.

But chef-owner Shotaro Kamio isn’t just interested in putting out a pretty plate. Unlike some practitioners of so-called “tweezer cuisine,” Kamio layers the various components of each dish mostly in the service of flavor. The results speak for themselves: Iyasare serves some of the most delicious, memorable, and — yes — strikingly beautiful Japanese food I’ve eaten in the past year.

The Tohoku region of northeastern Japan, where Kamio’s parents ran a noodle shop when he was growing up, inspires the food. Because of the area’s harsh winters, the local cuisine features a lot of cured, pickled, and fermented items — preservation techniques that are all highlighted at Iyasare. Where Kamio departs from tradition is in presentation and his seamless integration of modern, Western techniques like sous-vide cooking. And he’s particularly obsessed with imbuing his dishes with a heavy dose of umami, that elusive “fifth taste” that the Japanese define as a kind of savory quality — the taste of dehydrated shiitake mushrooms, dried konbu (seaweed), and miso. So what winds up on the plate feels like an exciting hybrid of old and new.

And what flavors. The aforementioned beet-cured trout dish balanced the lushness of the fish with several dabs of tangy yuzu aioli and crispy strands of fried burdock root and potato — a Japanese reimagining of capers, cream cheese, and lox. A bowl of sake-steamed littlenecks featured incredibly fresh, tender clams; meaty, double-smoked bacon; an addictive broth infused with deep ocean flavor; and, most intriguingly, thin strands of pungent dried konbu.

My favorite dish was something Kamio calls Ocean Umami, which combined raw scallop, sea urchin, marinated ikura (salmon roe), and a special ponzu that tasted strongly of roasted seaweed. The server suggested scooping the whole bundle into our mouths in one bite, which was unwieldy but utterly delicious — the sweetness of the scallop, the pure umami jolt of the sea urchin, the little pop and burst of brininess from the ikura, and the murkiness of the seaweed ponzu.

Kamio’s previous gig was as the chef for both the Oakland and San Francisco locations of the jazz club Yoshi’s, and he can’t help but practice a more personal style of cooking at Iyasare, given the restaurant’s intimate 35-seat dining room. Indeed, the chef, looking professorial in thick-framed glasses, personally inspects every plate before it leaves the kitchen.

The dinner menu typically consists of about twenty dishes, plus a few specials, divided not into standard courses but rather groupings of interrelated cooking techniques: raw/cured/salad, roasted/tempura/steamed, and so forth. Kamio said he designed the menu to be flexible, so that a number of dishes from each section are hearty enough to serve as an entrée, and almost all can be shared by two or three diners.

The dishes in the bottom-most section of the menu, which features grilled and sautéed items, were probably the most entrée-like of the bunch: beef tongue grilled like a steak and cut into thick slices, for instance, or, better yet, a miso duck leg “confit” served in a smoky, intensely earthy dashi-based broth.

Even the more standard-seeming dishes bore Kamio’s personal stamp. Fried Brussels sprouts were served with thick bacon batons and a tangy Meyer-lemon infused cauliflower purée. The agedashi tofu, whose chief pleasure is in the slippery texture you get when the fried batter mixes with the savory dashi-infused soy sauce, was notable for the tofu’s remarkable creaminess. And the crunchy, deep-fried kakiage (a kind of tempura pancake) was one of the best tempura dishes I can recall eating.

For dessert, try the Ringo-Bako, a whole roasted apple hidden inside of a pastry box, with excellent vanilla ice cream and a wafer-like miso caramel crisp dotted with citrusy yuzu zest on the side — some of the most enjoyable apple pie à la mode you’ll ever encounter.

Iyasare is the type of restaurant where there are always a couple of runners standing at attention, scanning the room for a water glass to fill or a dropped napkin to refold. For such a new restaurant, the kitchen seemed to be humming along, with just a couple of timing hitches: One night, our reserved table wasn’t ready in time, so we wound up eating at the bar (and enjoying it). Later, we had to wait more than twenty minutes for our final savory course — that duck confit — to come out. Otherwise, service, on the whole, was outstanding.

The name, Iyasare, translates to “to be healed,” which is a nod to the ongoing tsunami recovery efforts in Kamio’s hometown, as well as to his desire for the restaurant to be a comfortable “second house” for regular customers — granted, one with a modern, minimalist aesthetic. It’s a casual restaurant that feels fancy enough to impress a date.

The restaurant just launched a lunch menu, with a focus on simple izakaya-style plates — dishes you could scarf down within a half-hour lunch break. But, really, Iyasare is meant to be a place where you can slow down and savor a meal. In a couple of months, Kamio hopes to begin offering a kaiseki-style tasting menu on a regular basis — to my knowledge, he’d be the only Japanese chef in the East Bay serving that kind of high-end, intensely seasonal multi-course feast.

I’m not usually a fan of elaborate tasting menus, but the prospect of sitting down to a long sequence of Kamio’s creations? I can’t think of many things more exciting than that.