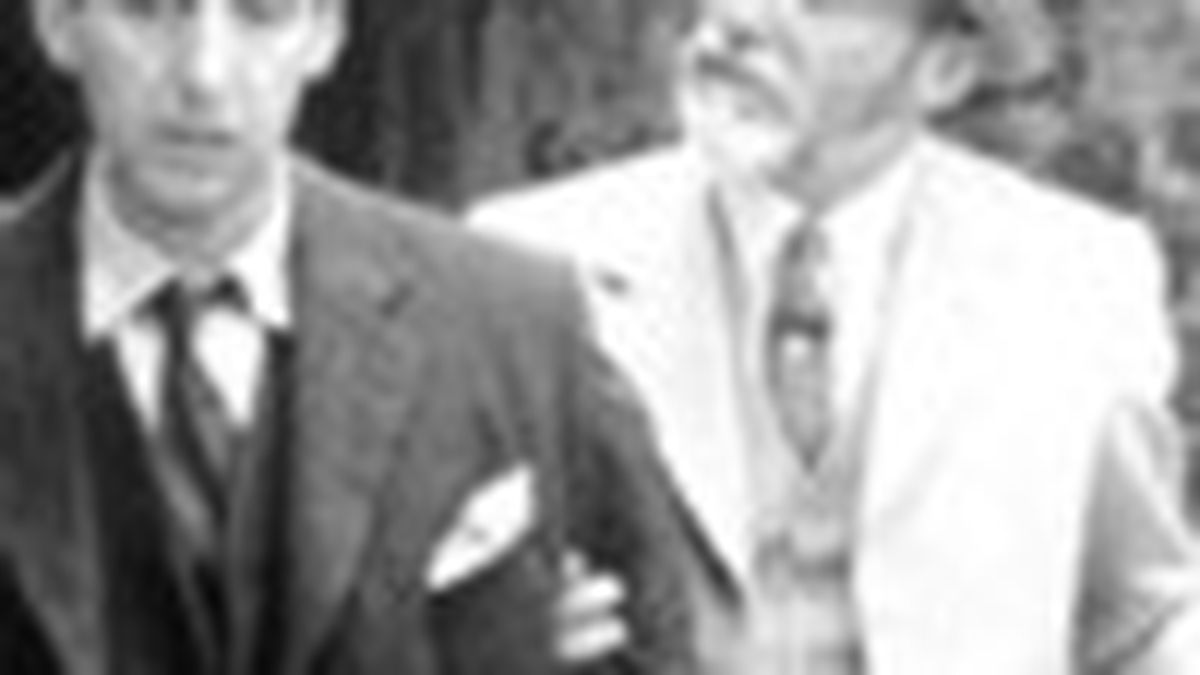 In his novel Ada, or Ardour, Vladimir Nabokov wrote, “Eccentricity is the greatest grief’s greatest remedy,” and he may well have been recalling the genius chess player from his third Russian-language novel, 1930’s The Luzhin Defence, published in English as The Defense. Marleen Gorris’ beautifully photographed film, loosely adapted by Peter Berry from that novel, opens with a shot of a train rumbling in darkness through a tunnel. On the train, a man sits feverishly scribbling chess positions in a notebook. At a train station, a young woman in a peach-colored dress waits in sunlight for the train’s arrival. That setup gives us the dynamics: the man, Alexander Luzhin (John Turturro), a shambling, vastly eccentric chess genius, lives in a narrow, gloomy world of darkness, while the woman, Natalia (Emily Watson), lives more openly in a world filled with light. Given the Freudian freight that goes with trains and tunnels, Nabokov’s great antipathy toward the good Viennese doctor notwithstanding, one might also presume that a romance is in the offing.

Set in 1929, for the most part on beautiful Lake Como in northern Italy,

The Luzhin Defence has its main characters converging on a grand lakeside hotel where an international chess tournament is about to take place. On the boat ride from the train station to the resort across the lake, Alexander doesn’t even seem to notice his fellow passenger, the lovely Natalia–or for that matter the beauty of the surrounding mountains. Obsessed and self-contained, he is oblivious to life beyond the chessboard. Later, sitting alone in the grand hotel’s dining room, he doesn’t even notice that it is a little boy, not a waiter, who has come to stand alongside him, desiring an autograph, and so he begins to tell the boy what he wants for dinner. But then he looks up–and smiles–then gives the boy the autograph. Monumentally obsessed, yes, but a monster? That smile tells us: no.

Gorris weaves Alexander’s flashbacks throughout the story: we see him as a young boy haunted by his parents’ disastrous marriage; by his father’s affair with his mother’s younger, more vivacious sister, who introduces Alexander to chess; and by his mother’s suicide, a consequence of that affair. Showing an early gift for the game, the boy handily defeats his grumbling, sore loser of a father and is eventually palmed off on the schoolteacher Valentinov (Stuart Wilson), who, recognizing the boy’s talent, assumes management of Alexander’s life for the next fourteen years, exploiting and profiting from that talent.

Gorris threads these darkly shot flashbacks through the more sunlit present-day narrative, where the eccentric and hypersensitive Alexander falls for the beautiful Natalia, an aristocratic Russian émigré who, amazingly, falls for him–charmed by his eccentricity, by how different he is from her more conventional and conventionally charming suitor, the wealthy Comte Jean de Stassard (Christopher Thompson), whom Natalia’s overbearing mother Vera (Geraldine James) much prefers.

Turturro infuses his eccentric with the right mix of nutty obsessive-compulsive behavior (though it’s next to impossible to project the interiorized nuttiness that Nabokov describes so well) and the occasional flash of charm that lightens the nuttiness; but it is Watson who has, I think, the more challenging role, charged as she is with making Natalia’s reciprocal attraction to Alexander emotionally felt. Which is to say, Turturro just has to make his character credible; Watson not only has to make hers credible but also her make their developing relationship seem credible.

This she does, beginning perhaps at the moment when he outrageously blurts out a marriage proposal to her while she’s playing outdoor tennis with a friend. She reprimands him for proposing before he even knows her name –which leads him, simply enough, to ask her name. In that moment her eyes light up; they harvest the attendant sunlight and reap golden wheat from it. This naiveté, this complete absence of socialization on his part, she finds deeply attractive–a lack of sophistication coupled with an openness missing from most of the men she knows. Watson, with her own apple-cheeked openness, makes this young woman as believable as the lost, sainted soul she portrayed in Breaking the Waves. She has the gift of credibility. When she says in all innocence that she finds him “fascinating and enigmatic and the most attractive man I have ever met,” it’s believable even while Luzhin reeks of an emotional disaster in the making. And their sexual relationship, too, is lovely and invigorating–especially for Alexander, who discovers that sexmate sharpens his ability to checkmate.

It does and it doesn’t hurt the movie that the backdrop of almost every exterior shot features some of Europe’s most beautiful scenery: it gives

The Luzhin Defence an art-house travelogue gloss that in some ways undeservedly diminishes the picture, but it also serves as a definite counterbalance to Luzhin’s painful shyness and awkwardness, which at times are almost unbearable to watch–I kept wanting to look away from him at the mountains across the lake. But Gorris, who also directed

Antonia’s Line and Mrs. Dalloway, shoots stunning interiors as well: one high-angle shot of a beautifully tiled interior courtyard, where people sit playing chess while others stand around watching, suggests that the people are, in fact, pieces. And in fact that’s how much of the world looks to Alexander.

Likewise, the hotel where the chess tournament takes place has a lawn set up with an outdoor chessboard and chess pieces the actual size of people. And of course during the tournament all sorts of off-board machinations are going on as people try to move other people around: Vera, who tries to destroy what she sees as her daughter’s infatuation with Alexander; and his former teacher, Valentinov, who abandoned him years ago when it seemed Alexander’s talent was slipping away, shows up, now trying to create havoc and distractions so that Alexander will lose to an Italian rival, Turati (Fabio Sartor), a chess genius, too, but with all the social graces Alexander lacks.

If The Luzhin Defence has a major weakness, it’s that the villains of the show, Vera and Valentinov, both lack the comic nastiness that usually animated Nabokov’s most delicious villains–and that most delicious adaptation of his work, Stanley Kubrick’s Lolita. Gorris needed a James Mason, a Peter Sellers; instead she gets Tweedledee and Tweedledum, and it hurts. It drains the movie of tension in the final stretch when it most needs it. Besides which, Vera’s motives are all too transparent, while Valentinov’s motives are way too opaque. The screenplay wasn’t thought through thoroughly.

Nonetheless, as the flashbacks to his mother’s suicide make abundantly clear, Alexander not only suffers the worst kind of grief–which has manifested itself in separation anxiety–but also the kind that has caused him, via his gift, to escape into the world of chess where he can control the board in a way that he cannot control life. Unfortunately, the movie winds down to a distinctly non-Nabokovian ending, a kind of tacked-on, quasi-happy wrap-up. It’s the kind that makes one shake one’s head and think, “Poor Luzhin. He should have gotten a second opinion.”