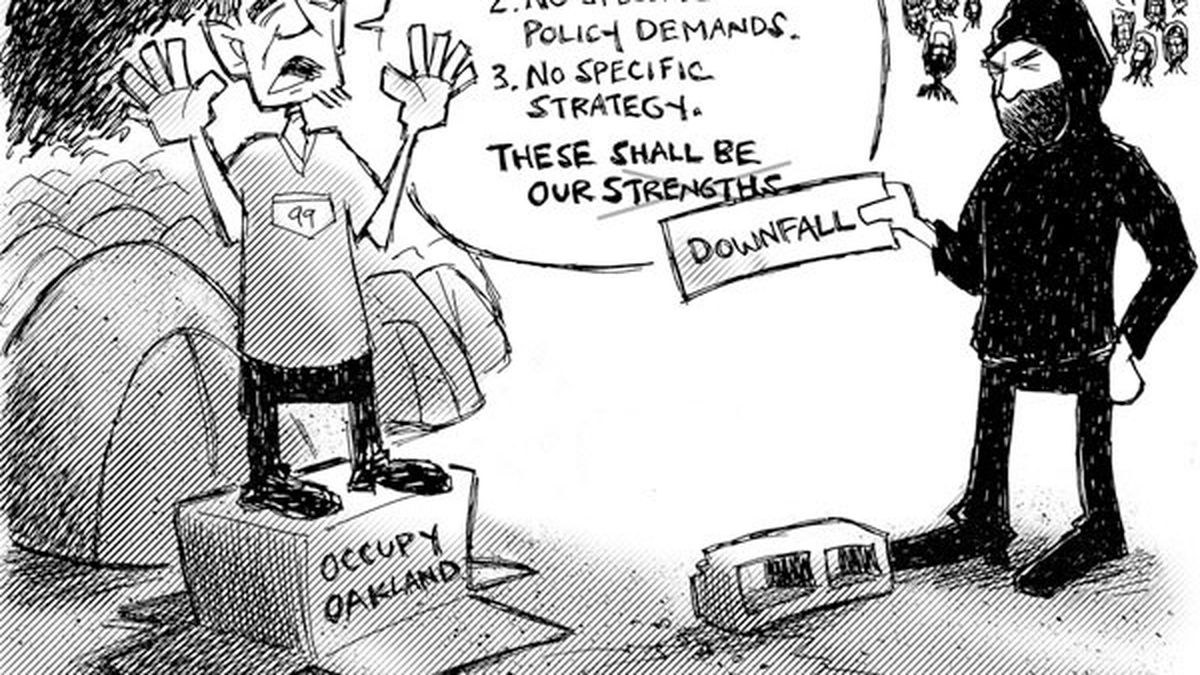 It’s Time for the Black Bloc to Go Away

The beginning of Occupy Oakland’s downfall can be traced to October 25, 2011, the day that Mayor Jean Quan green-lighted the first police raid on the City Hall encampment. That brutal — and at the time, unnecessary — crackdown launched the transformation of the local Occupy movement from a protest over economic inequality to an ongoing battle against Oakland police. OPD’s overreaction that day, firing teargas and other less-than-lethal projectiles at a mostly peaceful crowd, made international headlines and sparked global condemnation. It also polarized Occupy Oakland, empowering a hard-core group of protesters who embrace vandalism, so-called Black Bloc tactics, and seem to revel in violent confrontations with police. This group has enjoyed substantial influence over Occupy Oakland ever since.

By pointing to OPD’s over-the-top response on October 25, the Black Bloc group convinced Occupy Oakland to embrace a so-called “diversity of tactics,” an Orwellian euphemism that effectively means: “We want to fuck shit up.” Once the Occupy Oakland General Assembly had adopted this philosophy, the movement’s deeply undemocratic rules (the need for 90 percent of the vote to do anything) prevented nonviolent protesters from overturning it.

The Black Bloc brethren, who appear to be mostly young white men, many of whom don’t even live in Oakland, exploited this advantage to further their goals. They turned the wildly successful November 2 General Strike into a night of chaos, setting fires, breaking windows, and battling police throughout downtown. After a lull of several weeks, the Black Bloc group reignited early this year with “Fuck the Police” marches.

There is no doubt that the Oakland Police Department has a long and troubled history of violence and brutality. Few news organizations have reported on OPD’s record of abuses more thoroughly than the Express. But Oakland has a lot of other problems besides its police department, and Occupy Oakland, through its “diversity of tactics,” has lost sight of that fact, forcing the cash-strapped city to spend millions of dollars it doesn’t have responding to the Black Bloc. Moreover, the Black Bloc’s fetish for vandalism and violence has alienated a significant portion of Oakland’s progressive community to the point that Occupy Oakland is now looked upon with shame by some people who once supported it.

At no time was this truer than last weekend. From the start, Occupy’s actions leading up to January 28 were deeply flawed. It all began with a childish “press conference” in front of City Hall in which some Occupy leaders threatened city officials with future blockades and more violence if Oakland police stopped them from occupying an unnamed building.

Occupy leaders had purposely kept the identity of the building secret. Publicly, they maintained that they didn’t want Oakland police to have the tactical advantage of knowing where they were going, but privately they surely knew that many Occupy supporters would stay home if they found out that the target was the publicly owned Henry J. Kaiser Convention Center. A planned takeover of a building owned by the city was a guaranteed confrontation with its police department.

So it was no surprise that Black Bloc members came equipped on Saturday with large shields and items to throw at cops. In fact, the planned takeover of the Kaiser was so ridiculously unattainable it seemed clear that the real goal of many protesters was another ugly battle with police, a sort of “Let’s poke the bear, and watch it respond.”

The Black Bloc got what it wanted. Oakland police officers, as they are prone to do, overreacted, firing teargas and less-than-lethal weaponry at the crowd, surrounding the marchers, ordering them to disperse, and then giving them nowhere to go. Even journalists got swept up in the crackdown, as downtown Oakland once again transformed into a something akin to a war zone, and the city’s already poor reputation was further tarnished.

At this point, it appears that nonviolent progressives in Oakland, people dedicated to reforming the system, are effectively trapped in a toxic struggle between Black Bloc protesters who want to smash the system and a police department intent on defending it.

So what happens next? There is a possibility that after January 28, nonviolent occupiers will finally become fed up with the Black Bloc and will stop giving it legitimacy. But if they don’t, the city could be in for many more days like January 28 — unless Oakland’s larger progressive community steps in, retakes Occupy, sends the Black Bloc packing, and refocuses the movement on its original intent: changing a system that rewards the wealthy and large corporations while forcing everyone else to fend for themselves.

Federal Judge Thelton Henderson stripped power from Mayor Quan, Oakland City Administrator Deanna Santana, and Interim Police Chief Howard Jordan, ordering them to first consult with Independent Monitor Robert Warshaw, a former police chief in Rochester, New York, before making any changes to police department policies. Henderson is deeply frustrated with the department’s lack of progress in achieving court-mandated reforms. The judge also said that if Quan, Santana, and Jordan decide to ignore Warshaw’s recommendations, they must come to court and explain why. … Bay Area transportation officials also are moving forward with plans to extend BART to Livermore, even though such rail extensions — along with additional toll lanes planned for the region — could spur more sprawl by making it easier for suburban commuters to get to work. The Contra Costa Times reported that the Alameda County Transportation Commission, which is dominated by elected officials from suburban areas, voted overwhelmingly to include the $400 million BART to Livermore proposal in a sales tax measure that would go before East Bay voters. Commissioner Keith Carson, who represents Oakland and Berkeley, was the lone vote against the plan, saying more money should be spent on urban bus systems. … California regulators adopted strict clean-air standards for cars, requiring 15 percent of new vehicles sold in the state to have zero emissions by 2025. The new rules take effect in 2018, and industry analysts expect electric and plug-in vehicles to become common by the end of the decade. … And Assemblyman Sandré Swanson of Alameda has dropped his bid to challenge state Senator Loni Hancock of Berkeley in this year’s senate race, the Oakland Tribune reported. Swanson endorsed Hancock, and she, in turn, endorsed him for 2016.