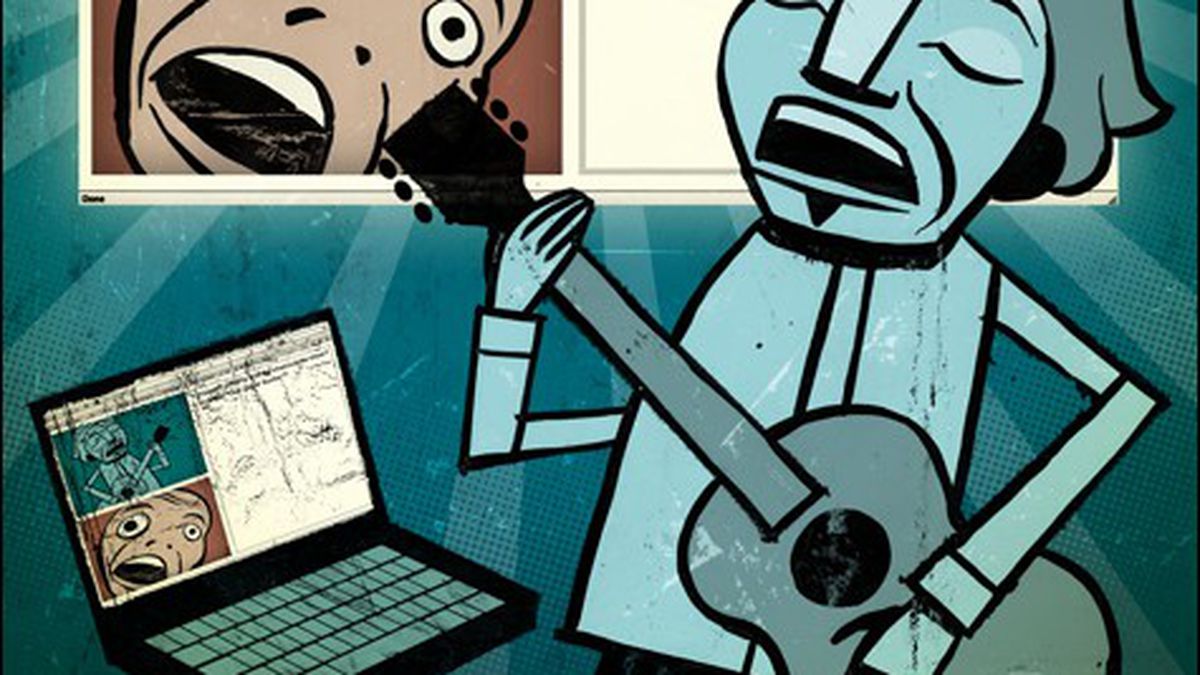 There’s a reason the word “Chatroulette” has become outré. Think: dicks. There are, in fact, scads of dicks on the nine-month-old Internet phenomenon — many more than founder Andrey Ternovskiy intended. Supposedly, the seventeen-year-old Russian Internet mogul is in the process of creating an algorithm to identify and weed out all the penises. But for now, he’s got a dirty site on his hands.

For those unfamiliar with the network, it’s fairly straightforward: You attach a web cam to your computer, log onto Chatroulette.com, and have a random conversation with whoever pops up — or flip to see who awaits on the next screen. Anyone in the world can use it. Most conversations are fleeting, most users noncommittal, since you can ditch the current chat at any point and initiate a new one. A lot of people use it for exhibitionism.

A lot. So many, that Bender had to make them a part of the show. He created several hand-written signs with the words “Dick!” “Cock!” and “Schlong!” and has a female assistant hold them up every time one appeared on the screen. Audience members shrieked. Some turned it into a drinking game.

The July 22 rendition featured several returning guests, including celloist the Unwoman, Vegas-style magician Ryan Miller, haiku artist John Staedler, character impersonator the Ukalady, and gut-bucket string band Mad Noise. All were competing for cash prizes ($75 for first place, $25 for second place), awarded to the act that not only could rock a stage at Make-Out Room, but also find favor with the notoriously fickle crowd on Chatroulette. The show went three rounds: five minutes, three minutes, one and a half minutes, respectively. Every so often Bender’s browser would crash, and the whole screen would go black. Heckling was inevitable.

Undoubtedly, the night’s most successful performer was Unwoman. Known for busking in BART stations and side-manning with the band Stripmall Architecture, she took the stage in Victorian garb: lacy blouse, black-widow skirt, tiny top hat affixed to the side of her head. She sang Etta James’ “At Last” in a lustrous vibrato.

A guy appeared on the Chatroulette screen. Grainy. Square glasses. Maybe mid-twenties. He leaned forward to type an instant message. “Nice,” he wrote. “Let me see you.”

Unwoman adjusted herself before the computer screen.

Such is the challenge of simulcasting, said Bender. “This is a completely new form for performers,” he explained. “They’re performing for a live audience that’s watching, as well as for people who don’t realize they’re part of a show. They don’t realize that when they hit ‘next,’ they’re dissing a performer.”

Bender heard about Chatroulette the way most adults do — by reading a news article about the boy wonder Ternovskiy. He said he’s dabbled in the site out of curiosity but never taken a prurient interest in its content. “I’m over the hill being in my thirties,” he admitted. “Chatroulette is mainly for people in their teens and twenties. … It’s not something I do at this point.” Nonetheless, he got seduced by the brute competitiveness and accelerated nature of the medium. In real life, people have to use social niceties and gracefully duck out of conversations. But if you bore someone on Chatroulette, he can disappear on a dime.

With those things taken in consideration, Unwoman had a clear advantage over the other contestants at the ChatRoulette Show. She’s young, feminine, and pretty, with piercing eyes and sausage-curl hair. She was one of two women on the lineup, and unlike the Ukalady, she chose not to hide under ridiculous wigs and big glasses. But even Unwoman couldn’t overcome the provocations of an Internet audience.

She began her second set in the company of a seemingly harmless young man. He smiled. Unwoman grinned back. Bender’s assistant, Hope Mirlis, flashed a sign at the bottom of the screen. “Is your audio on?” it asked. The young man smiled again. “Hi,” he typed. Then he flipped past. The audience hissed. A group of girls skidded by, flashing their cleavage and heaving a billboard for “Girls Gone Wild.” Then came a bearded guy. Then three pretty girls. Then two dicks. Then the screen went black. During the third round, a pretty teenager took one look at Unwoman, and gave all of us the finger.

All those improprieties are just the nature of the beast, said Bender. Just like the browser that keeps crashing. But every once in a while, Chatroulette finds a way to promote brotherly love. During the first ChatRoulette Show, for instance, Bender’s browser landed on a pair of teenagers in Tennessee, who got a kick out of seeing the live audience. Dustin and Jonathan stared raptly through a whole spoken-word set, and applauded the performer. “They were hysterical,” said Bender, who eventually flipped to the next screen himself. “There was a point when we said good-bye, and moved on,” he said. “Then they popped back up.” Now, he says, they’re all Facebook friends.

In the twenty years that he’s been involved in theater, Bender has tried a variety of experimental, concept-driven projects. But the ChatRoulette Show might be his most novel idea to date. For the next show — slated for August 27 at the Make-Out Room — he’s billing a burlesque dancer, more musicians, and more improv comedians. He wants less blank screen time. He wouldn’t mind fewer penises, though such things can’t really be helped in a site build around voyeurism.

Then again, Bender is planning a ChatRoulette show edition in the Castro. He thinks the dicks might be a hit over there.

Bake Your Own Amazing Bagel to Benefit the ACLU

The Cancer in the Oakland Mayor’s Race