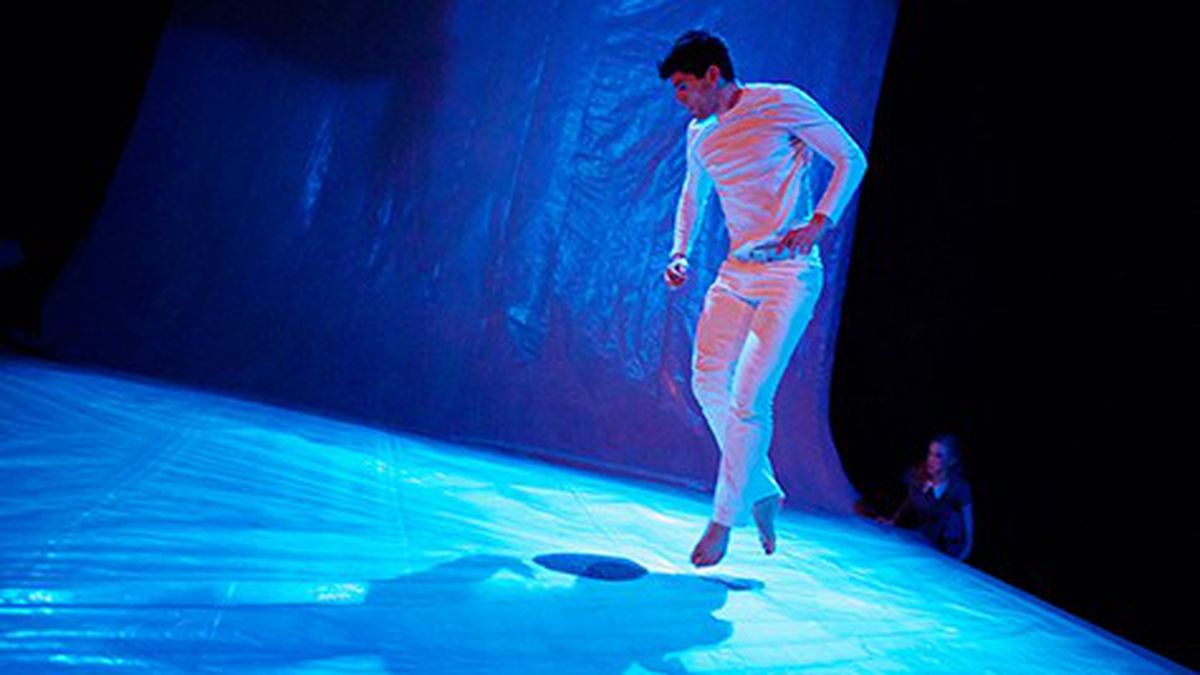 The play starts with a man dressed all in white, standing on a upward-curving wooden ramp. Other than the man, Nick, (as in “nick of time”) and the ramp, the only constant presence on Nina Ball’s stage for Shotgun Players’ Antigonick is a contorted papier-mâché horse suspended from the ceiling by rope. But never mind the horse, which disappears as the focus turns to the characters onstage — its presence merely sets us up to expect even stranger things.

“What is a nick?” asks Eurydike (Monique Jenkinson), in the story based on Sophocles’ 441 B.C. tragedy, and adapted by playwright and poet Anne Carson. Eurydike is referring to the space of time in which the death of her son Haimon could have been prevented, but she’s also asking one of Antigonick‘s central questions: What is time, and how do we measure it? In this case, time is tampered by the graceful, ghost-like figure of Nick (Parker Murphy), who attaches himself to different characters throughout the play, sometimes mirroring their actions, sometimes deviating from them completely.

The play opens in Thebes, with Antigone’s (Rami Margron) decision to bury her recently deceased brother, against King Kreon’s (Kevin Clarke) edict. When Kreon discovers what Antigone has done, he orders her to be buried alive. But the people of Thebes — including Kreon’s son Haimon (Kenny Toll), who is engaged to marry her — think Antigone should be spared. Carson’s translation stays true to the classic play, but emphasizes new aspects of the tragedy. She originally produced Antigonick as an art book, with characters’ lines hand-lettered in all-caps and spread across the pages in unconventional ways.

What’s amazing is how co-directors Mark Jackson and Hope Mohr managed to faithfully transform Carson’s very visual book into a compelling play. For example, the beginning scene in which Antigone tries to convince her sister Ismene (Jenkinson) to help bury the body of their dead brother features the two sisters yelling their lines in unison, and then slowing down and repeating the lines with new cadence and emotion. The expressive dance that follows illustrates the sisters’ back-and-forth between shared experience and disagreement.

While the incorporation of movement and yelling is often highly successful — such as the synchronized dance performed by the entire cast, which eventually reveals itself to be the motion of a hand on the face of a clock — there are places where it felt unnecessary. Unfortunately, while Margron delivered her opening lines with a power and poise that breathed new life into the character of Antigone, her voice had an uncomfortable hoarseness at the loudest parts (we can only assume due to all that yelling). Margron also shined in her other role as a comedic, be-sneakered Teiresias. The choice to have Margron’s stoic Antigone become the prophet Teiresias underscores the wisdom of Antigone’s character in this production.

Jenkinson as Ismene also takes on a second role as Eurydike. While her portrayal of Ismene is slightly flat, Jenkinson’s interpretation of Eurydike is the best part of the play. Inspired by Carson’s writing, which imbues Eurydike with a new awareness of her own marginalization, Antigonick goes to the next level by showcasing Eurydike’s monologue in a closed-circuit television set-up that brings Jenkinson’s ultra-expressive face front and center. Her delivery is pained and powerful, and followed by a dance that is equal parts destructive and empowering. Her emotional outpouring eclipses all the other tragedies. Audience-goers will see Jenkinson’s desperate eyes long after the play’s end.

Clarke’s Kreon is also spot-on and darkly funny. David Sinaiko’s Chorus is both witty and heartfelt, although Toll’s portrayal of Haimon is fairly bland. This blandness works to his advantage when he transforms into the Matrix-esque Messenger who informs his mother of his own death.

By drawing attention to Eurydike and the slighted mothers of history, and by turning time into a silent, physically dynamic onstage presence, Antigonick becomes more about the tragedy of being left behind than Antigone’s simple act of civil disobedience.