This is an adaptation of Sinclair Lewis' 1935 novel. 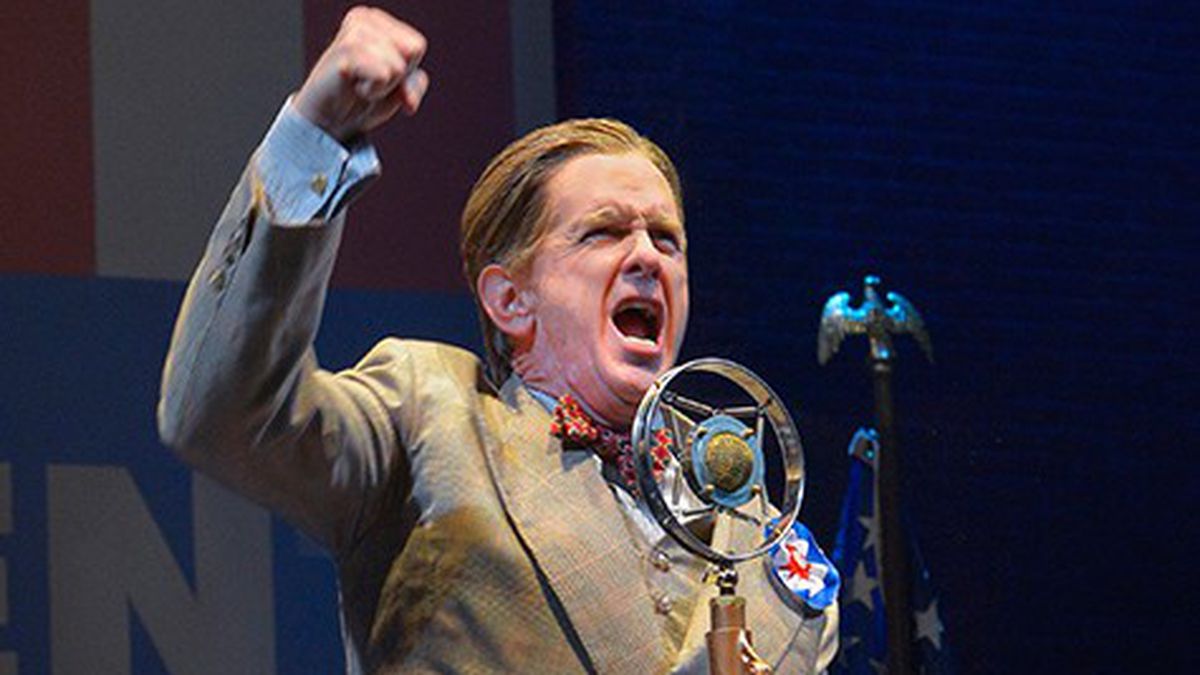 Unless you’ve been living in a cave — or Canada — for the last twelve months, the first act of Berkeley Repertory Theatre’s new play adaptation of Sinclair Lewis’ 1935 novel, It Can’t Happen Here, will have you thinking: “This is exactly what’s happening here. It’s ridiculous!” But during act two, the thoughts will flip and flop: “It’s ridiculous; this would never happen here!”

Artistic director Tony Taccone and screenwriter Bennett S. Cohen have handed director Lisa Peterson a two-era time capsule in act one’s narrative about a demagogue who becomes President of the United States and whose “great again” promises are an echo of both early 1900s American history and our current live-streamed, 21st-century existence. The fact that 2016 so closely mirrors the time described in Lewis’ novel — a society reeling due to fascism’s upswing, democracy’s endangerment, economic disparity, racial strife, fear of immigrant “others,” and more — is essential. The unsettling context for audiences (republicans, democrats, and independents alike) led to lots of double-sided, “Huh, how history repeats itself” laughter in the production’s first sixty minutes.

But unlike real life partisan politics, the play’s action didn’t remain lodged in which side of the waffle a person winds up on or even the spin cycles of right- or left-leaning factions. Instead, the play’s thrust was in what happens between politics’ extremes and how that affects the future of everyday people in a small Vermont town.

In Fort Beulah, Vermont, and all across America, the middle territory of society is where the proletariat resides, the populist masses who toil in blue collar jobs and fight for union protection; the journalists and activists who fiercely protest the shackling of free press, free speech, and freedom of thought. The first act left us there, with workers denied their rights and basic human dignity all but erased. Then, a gunshot just before intermission launched a seemingly fantastical future: the second act’s grim, violent race to the bottom.

The newly elected president unleashed zealous paramilitaries, quashed underground uprisings, and placed in peril civil rights and actual lives. Despite some scenes that were coated with overly moralistic urgency and felt false, It Can’t Happen drove relentlessly toward believable, shudder-worthy horrors. “A cautionary tale,” a phrase often applied to Lewis’ novel, was perhaps too mild to describe one of the adaptation’s most climactic scenes, in which the protagonist was strip-searched. The actor, bare skin blindingly lit as he cupped his genitals, was not “art” in that moment. He was us.

Two-time Obie Award winner Peterson wielded a deft hand, directing the cast with perfect balance as they careened through the play’s many scenes. Any one of these fine actors could have easily “taken over” as solo stars — as could have scenic designer Rachel Hauck’s ingeniously simple but suggestive floor-to-ceiling brick wall, terrific drop-down painted backdrops, and 1930s period-appropriate furniture on wheels that spun through the space and kept the pace humming. Instead, Peterson rode the script’s momentum, guiding the first acts’ laughable election seamlessly — despite the intermission — into the second act’s doom and gloom.

Tom Nelis showed terrific nuance as the protagonist Doremus Jessup, the small town newspaper editor with a liberal bent whose man cave is a home library where he hides like a tiny island in an ocean of books. From scholarly to scared, Nelis’s performance encompassed a man’s strengths and vulnerabilities. Deidre Henry as Lorinda Pike managed to win hearts while grafting herself onto a role with ambiguous morality as the married Jessup’s “other woman” and also, a heroic figure in the fight for democracy. Most of the fourteen-member ensemble played multiple roles: Will Rogers, Sharon Lockwood, Mark Kenneth Smaltz, and Charles Shaw Robinson stood out for their fluidity in assuming diverse characters. The skill of these good actors was often hidden in subtlety — a pair of glasses removed swiftly or slowly that shaded the underlying fury as swift or simmering; a physical closeness or separation measurable in inches that projected authority, submission or a certain numbness-to-self-awareness.

In the end, It Can’t Happen Here was like a dream that starts out fun — comical and semi-fictional — but feels real. Half way through, it splits off into a nightmare we can only hope doesn’t come true.