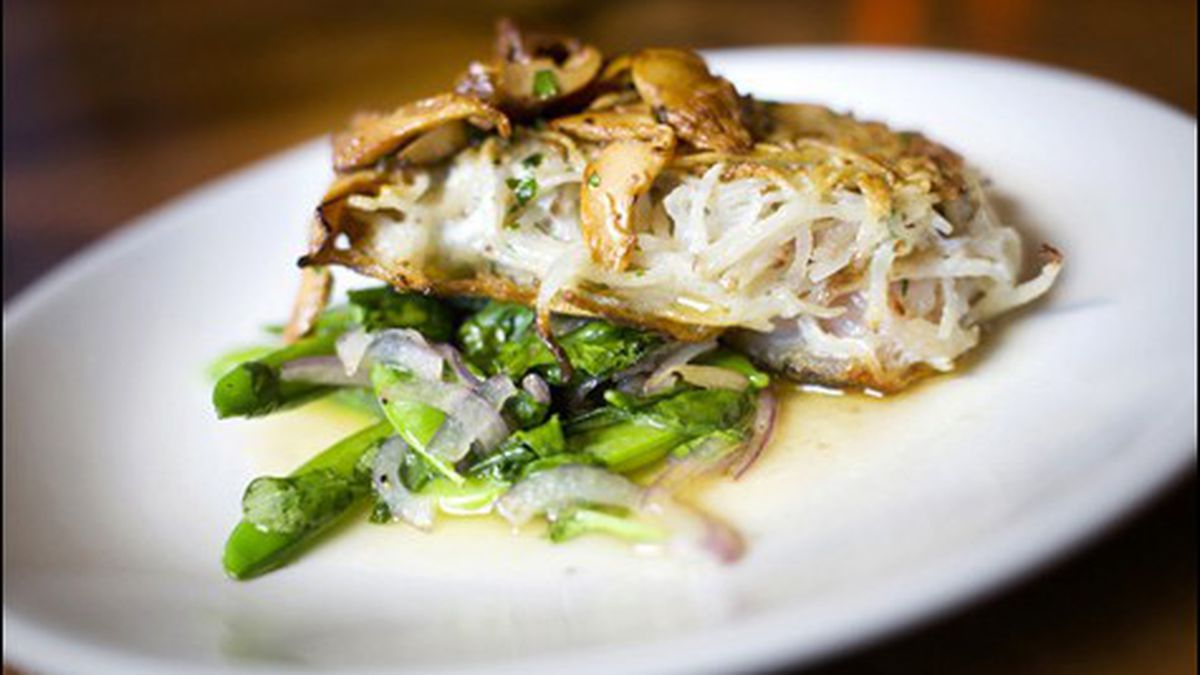 It All Starts Somewhere

Origen, the new South Berkeley venture of longtime restaurateurs Tracy Leighton and Daniel Clayton, isn’t shy with its intentions. In case you missed “Farm to Fork Restaurant” chalked across the wall in large type, abundant bowls of squash and pumpkins spill over for your benefit throughout the space (certain to be swapped out seasonally). Burlap sacks and annotated produce diagrams line the walls, with a green and brown color scheme completing the unsubtle, earthy message.

Farm-to-table cuisine has been a la mode for decades in the Bay Area; to dine here is to make peace with this. Fresh, local ingredients can only get you so far, though. If a weak chef trumpets heritage birds and rooftop honey to mask professional shortcomings, it’ll show. Not so with Leighton and Clayton, whose sometimes-goofy allegiance to locavore dogma is well matched by their talents in the kitchen.

Fair warning: Don’t be intimidated by Origen’s menu, an elaborately constructed guide on par with a statistics textbook or the Necronomicon. Elements include a hefty tasting menu; numerous sub-sections like “Nibbles,” “Plates,” and “Accoutrements”; breakdowns of virtually every ingredient’s source; a letter coding system, including S for Sustainable and B for Biodynamic; a wordy manifesto (“The growers who supply us with their farm candy …”); and enough fonts and boldness levels to combust a copy editor. The enthusiasm is both exhausting and endearing.

A squash salad livened things up to start. A dose of harissa was pepper-sprayed over wilted arugula and roasted squash strips, rounded out with some sheep feta funk. By comparison, the unobtrusive pork rillettes lacked pep (swirling in a little tarragon mustard did help the cause). Sherry vinegar added sweet tang to a mountain of pan-fried brussel sprouts and chestnuts, made snowy with sieved egg crumbles. Flash-fried wonton wraps encased a sweet mash of chicken thigh and apples, served over fried sprigs of broccoli rabe. A little plate of vinegary fried green tomatoes were lightly crisp on the outside, dusted with reggiano and breadcrumbs.

Leighton and Clayton were excited to inherit a wood-burning oven in the Origen space; they’re farm-to-forking a range of inventive toppings onto a crisp, slightly charred thin-crust pizza. I tried one with gruyere, eighteen-month aged jamon, and cippolini onions, and another with shrimp, nettles, and sheep feta; both were smart combinations, with little craters of olive oil adding body to a balanced distribution of ingredients. Also, the crust was excellent, especially in light of the chefs’ newness to the form.

In addition to expected staples of this type of place — Marin Sun Farms burger, beet salad, fried green tomatoes — there’s a broad vision at play here. It’s surprising, quite frankly, that Origen manages to dabble in so many cuisines without overreaching. The chefs have good instincts, and they manage to pull off Spanish, Italian, Latin, and Asian-inflected dishes with equal aplomb. A soupy Peruvian-style tamale was spicy and forgettable, but largely their globe-trotting style is effective.

One of my favorite entrées was the red-curry-rubbed pork shoulder, braised for eight hours and served over a web of rice noodles with mixed mushrooms and yam choy (an herbaceous bok choy cousin). The noodles plumped up nicely with the braising juices, and the heady mound of pork shreds was built to savor slow.

A rich lingcod filet was crusted in salty potato shavings, then pan-fried and given an oven finish. The decadent fish was fatty and melt-soft, but the shoestring armor braced its wobble. Sautéed sugar snaps and tatsoi greens gave this dish some needed greening.

At Origen, apple cores are used to make syrup for the bar’s apple martinis. Spinach that’s too homely for a salad goes into the veggie gratin. Leighton and Clayton apply a “root to stem” ardor to their produce that’s often reserved for whole-beast cooking. This no-waste philosophy even extends to Origen’s gaudy booth upholstery, holdovers from the space’s last tenants. “Orange really isn’t my thing,” said Leighton, “but I’m not just going to tear up the booths. You have to re-use and recycle, right?”

Aesthetics may be the low point at Origen; the owners readily admit they have a difficult space to contend with. The restaurant is sectioned off in three distinct units, without a unified flow throughout. The first area is a long bar facing the open kitchen, a classy found-wood affair that outshines the rest of the space. It opens gawkily into a middle room cramped with wooden two- and four-tops, followed by a third, innermost sanctum with a row of booths along the wall. This parceling of the dining space creates a strange disharmony, with each non-bar area seeming isolated from the restaurant’s core. No matter where you sit, you feel marooned.

“On my dream list, I would love to just tear out those walls and create one big space,” said Leighton.

The location, too, is not ideal. It’s an isolated strip of Telegraph, a mile from the clusters of boutiques and yogurt shops that provide heavy foot traffic. A too-bright neon Open sign glows in Origen’s window, incongruous with the soft-lit, earthy interior. Clearly they need something to alert the world to their presence.

For the last six and a half years, Leighton and Clayton have also run a restaurant in Pleasant Hill (The Fig Tree, formerly Nibblers Eatery) with a similar menu and approach to Origen. In Berkeley, they’re taking a measured risk: Origen is twice the size of their Pleasant Hill spot, and the last two restaurants in this space didn’t last a year. Leighton and Clayton have lost a sous chef and a house manager since opening in late October, but they remain in high spirits.

“I think some people look at us with a little Schadenfreude and wonder, ‘Are they going to make it?'” Leighton laughed. “I think curiosity alone is going to bring us new customers.”