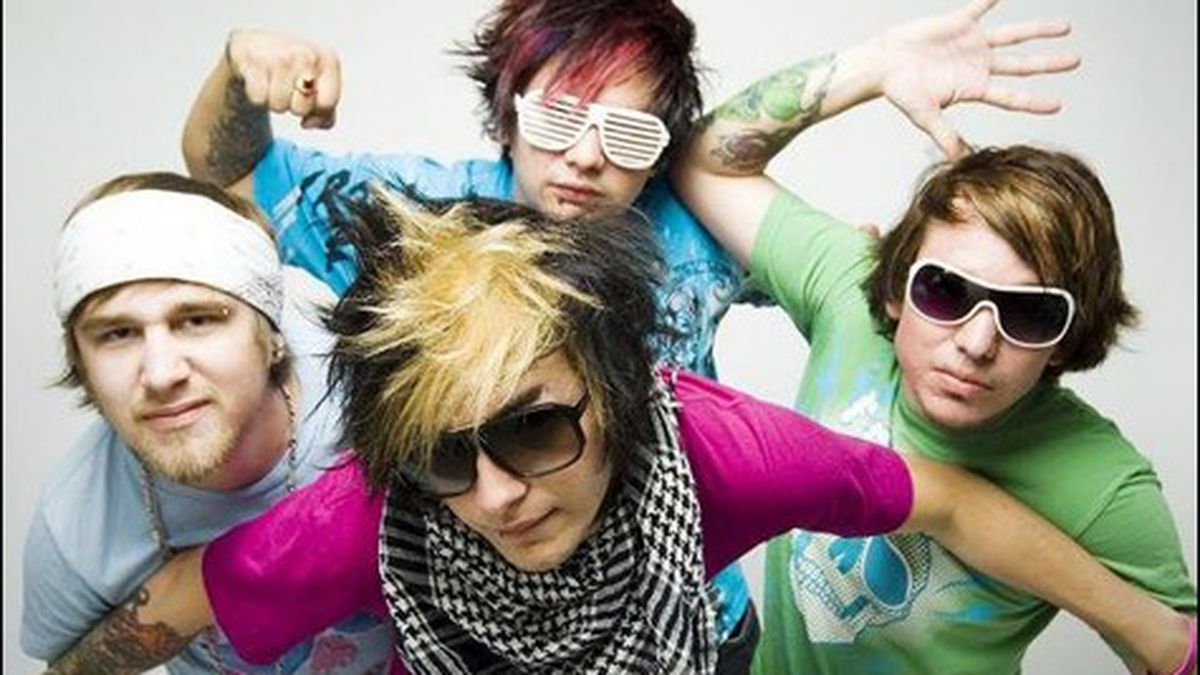 Is There Anything Remotely Redeeming About BrokeNcyde?

Every generation has its particularly detested music genres: rock ‘n’ roll, disco, punk, hair metal, rap, nü-metal. Sometimes these movements ultimately prove to have merit, and are embraced into the cultural lexicon. But others are better left relegated to the archives.

For critics, bad-music trends pose gleeful opportunities to pat ourselves on the back for having superior music taste, and to poke fun at a whole bunch of ridiculous-looking and -acting people who may one day reflect upon their participation in these scenes with embarrassment and shame. And who can resist that?

Seriously though. Part of me has been morbidly curious about the wave of crunk-core, crab-core, and screamo that has pervaded the consciousness of suburban youth across America. My first introduction was BrokeNcyde’s “Freaxxx” video, in which the young male members of the suburban Albuquerque group and assorted young women dance to what sounds like an obnoxious electronic dance beat mashed with rapping and punctuated with harsh, raspy screams (an element taken from screamo, a subdivision of emo). It is, in other words, a collision of disparate, discordant elements. It’s also god-awful.

Since then, I’ve discovered a whole plethora of like-minded bands, each one seemingly more unlistenable than the others: Attack Attack! (purveyors of crab-core, so called because of its members’ synchronized squatting dance) and The Bunny the Bear, whose two vocalists wear — you guessed it — a bunny mask and a bear mask, respectively. In many ways descendants of rap-metal, these bands seems to capitalize on young people’s apparently simultaneous desire to head-bang and get their rave on.

When I heard that BrokeNcyde and a slew of its contemporaries were not only still going strong but also on tour and would be stopping by the Oakland Metro last week (i.e., right beneath the Express‘ office), my interest was piqued. More than just a need to feel culturally superior, I wanted to know what the attraction was, and if there were any redeeming qualities to the music. Actually, I already knew the answer to that, but I wanted to witness the spectacle for myself. I wanted to know how bad it really was.

For Monday night’s show, which was scheduled to start at 5:30 p.m., the kids started lining up hours before then (uselessly so, because the show wasn’t even close to selling out). Most noticeable was that the teens (and pre-teens) looked definitively suburban: Their dress and hairstyles screamed mall-anarchist, Hot Topic, a kind of formulaic, capitalist-approved version of rebellion. Sure enough, every one I interviewed was not from the immediate area: They came from Castro Valley, Antioch, San Mateo. Most were there to see headliners Blood on the Dance Floor, a dance-pop duo whose members look like a mash-up of J-rock and screamo — vaguely deathrock-ish, with neon colors and anime sensibilities. Also: lots of tattoos and facial piercings. (By the way, facial piercings, once relegated to outliers, now appear to be totally acceptable for fourteen-year-olds.)

Here’s what they had to say about why they like this music: “They’re hot.” (Jessica, 15, of Castro Valley, about BrokeNcyde.)

“Free-spirited.” “We have a lot in common: partying, sex, blaming shit on America.” (Michael and Kiyyaa, both 14, from Antioch, about rap-rocker Deuce.)

“There’s no way to explain how awesome it is.” (Gilly, 14, from San Mateo, about Blood on the Dance Floor.)

Okay then. Having once been a teenager, I could understand being attracted to (in more ways than one) bands that expressed something I was passionate about. Sex and partying seemed a bit superficial, but who could blame them for wanting to have fun? Maybe the live experience would reveal more.

I got there in the middle of The Bunny The Bear’s set. Sure enough, masks were on. Two giant screens of a cartoonish band logo flanked the stage. They clearly knew their audience. The Bunny was the screamer; The Bear sang more melodically. Synths punctuated through the jun-jun of the vaguely hardcore-ish foundation. This was juxtaposed by repeated calls for Oakland to “fucking move!” Meanwhile, bored adult chaperones sat patiently in the adjacent bar area, drinking and fiddling with their smartphones.

Appropriate for the short attention spans of the audience, sets were brief. William Control “played” a sort of new wave-y electronica. I put played in quotation marks because the members of the band (a bassist and a drummer), in addition to the pre-recorded synth and drum-machine track they played along to, appeared to not actually be playing their instruments. Or, at least, they weren’t amplified — the drummer hit softly, and he never touched his cymbal. Sample lyrics: How long can a generation suffer? How long can a generation lose? The whole thing seemed gimmicky — from the frontman’s by-the-numbers Victorian look to the bassist’s frequent spit-spraying liquid in the air to the faux rebelliousness of the lyrics.

And then there were the sexually explicit comments, such as the singer boasting about the size of his drummer’s penis, which seemed in line with the whole Is Anyone Up? ethos. I realize this is all starting to make me sound incredibly old, but there was something disturbing about the level of sliminess and the age of the crowd (I spotted more than a few pre-puberty kids). For example: The wiry tattooed rapper Deuce urged at least three times for any interested girls to “meet me at the motherfucking merch booth” to “get sexy.” No parents seemed alarmed.

The only redeeming quality I could deduce from this scene was the relative air of inclusion. I saw one young gay couple dancing and being affectionate. Several of the fans embraced androgyny, and one of the tour’s sponsors was M.O.B. (Musicians Opposed to Bullying). But that doesn’t change the fact that the music still sucked.

By 10 p.m., I had grown increasingly irritable. My fascination had turned to depression, and then anger. When Polkadot Cadaver — a group whose music I can only describe as “carnival-core” — started playing a version of Michael Jackson’s “Billie Jean” and several parents began dancing enthusiastically, I questioned the state of humanity.

But I promised myself I’d hang on until BrokeNcyde. The four emcees and one drummer finally rushed onstage after what was an incredibly long mic check. They’re basically a crunk outfit, but with jarring wraith-like screams layered over the rapping.

Two songs in, I couldn’t take it anymore. I had been there for hours and I was worn down. I needed out.

Granted, it has become rather popular for critics and music fans to deride these groups, so I’m certainly not original here. One on hand, why even pay attention to them? Wouldn’t ignoring them make more sense? Yet to be dismissive would not only be easy, it would deny a veritable cultural force that’s attractive to a sizable population of young people. Like it or not, these bands have sold thousands of records (and MP3s). BrokeNcyde’s debut album in 2009 sold more than six thousand copies, landing at #87 on the Billboard Top 200. If anything, this rap-hardcore-dance mishmash seems to be fractionalizing into ever-more bizarre combinations of musical styles, and, as long as Victory Records and the Warped Tour are around, these bands will have an audience.

To be fair, I listen to music that the majority of sane Americans views as completely unlistenable. But at least there is musicianship and integrity, as well as a sense of value placed on the actual music. None of the young people I interviewed cited the music as the primary reason they liked the bands. As fourteen-year-old Gilly from San Mateo put it: “When I first discovered [Blood on the Dance Floor], I was, like, ‘Oh my God, they’re so cool.’ It made me feel better about myself. Haters are gonna hate.”