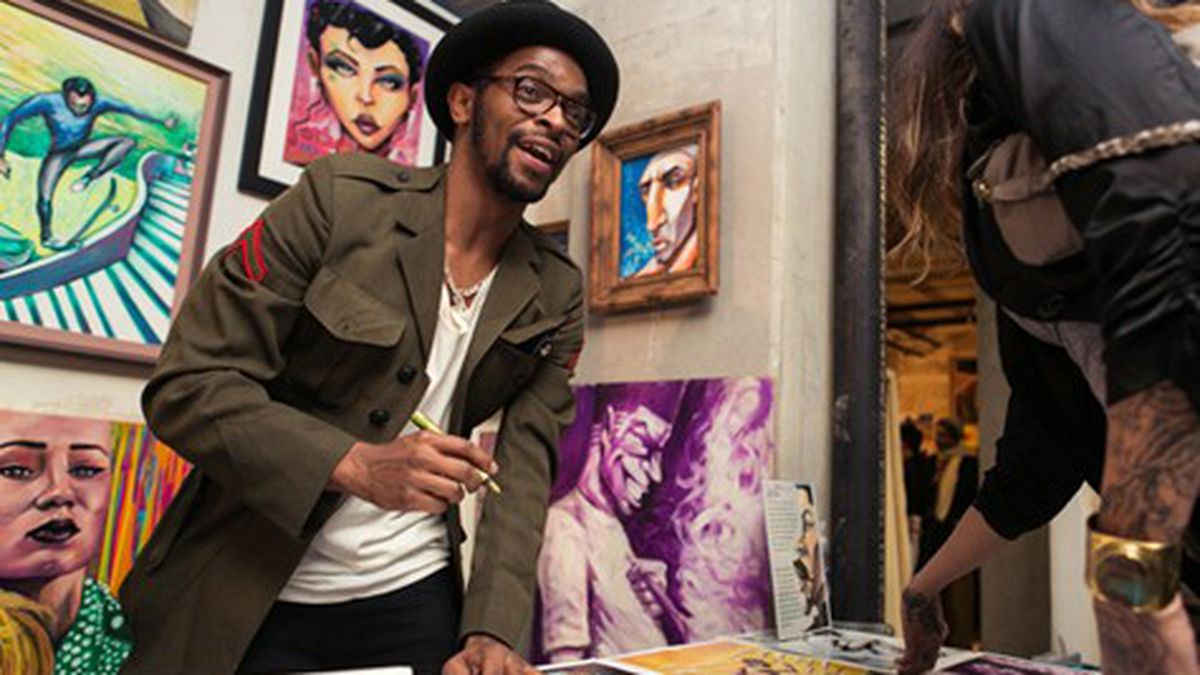 As the event's future hangs in doubt, so do questions of who benefits — and who doesn't — from it.

Recently, Shari Godinez — executive director of the Koreatown-Northgate (KONO) community benefit district and one of many people working to facilitate and sustain First Fridays, the monthly festival that clogs downtown Oakland with vendors and revelers — found herself with a problem on her hands: Many of the event’s attendees were having trouble finding the galleries amidst all the other activity. Now, according to Godinez, KONO’s marketing department is considering putting up “wayfinding” signs.

On the face of it, it’s a funny irony: the idea that we’d need signs to show people where galleries are in a neighborhood that’s choked with them, and at an event that was originally founded specifically to highlight art. But the signs also speak to the tension inherent in First Fridays as it exists now: This is an event that was founded by art galleries, for art galleries, as a means of getting people interested in the community, and, hopefully, interested in buying pieces. Now, eight years after its inception, the event now known as First Fridays is many things — a roiling street fair, a boon for bars and restaurants, the bearer of undeniable cultural cachet for Oakland — but it is not, strictly speaking, an art event. And with the event’s funding in jeopardy and its future in question, “Art galleries have nothing to do with First Fridays anymore,” said Kimberly Johansson, whose Johansson Projects gallery has anchored the corner of 23rd Street and Telegraph Avenue for several years.

She was speaking both figuratively and literally: In 2010, Oakland Art Murmur — that is, the formal nonprofit organization currently representing thirty of the galleries and mixed-use venues scattered between Koreatown-Northgate and the Jack London district — officially split from First Fridays, the name given to the street party itself. That break was partly practical: The artists and small-businesspeople running Oakland’s galleries were never expecting — or equipped — to handle the logistics of security, street closures, crowd control, and all the other rigmarole of managing an event that draws an estimated 20,000 people monthly. (“When we are aiming to focus Oakland’s attention on the galleries, we were putting too much time and money into the street-fair aspect of 23rd and Telegraph,” Art Murmur Executive Director Danielle Fox told the Express last year after Art Murmur announced it would no longer be paying for the street closure).

But the split was also philosophical: The Art Murmur organization has made clear its intention of keeping its focus solely on artists and galleries; even its webpage offers tips on “avoiding the crowds and getting into see the ART.” And Johansson, who has seen both Art Murmur and First Fridays evolve dramatically over the years, described these changes with a mixture of awe and ambivalence: “[First Fridays] started with bicycle-powered sewing machines and bands and then it slowly evolved into any kind of street festival,” she said. “It gained some diversity and generated a lot of press — we had people from Palo Alto driving up for Art Murmur, people had read about it, they thought it was the greatest thing. But it lost some collectors. Now, we’ve had people say art isn’t the focus anymore. And I personally think it’d be more interesting if it had more of a focus than just a random gathering of people selling T-shirts and turkey legs.”

After the Art Murmur organization stopped closing off 23rd Street, the City of Oakland took over management of the event, at significant cost. And now, with the city having announced that it will no longer be taking responsibility for the event, the future of First Fridays hangs in doubt. “We’ve been shouldering all the paperwork and all the costs since September of last year,” said Samee Roberts, marketing manager at the City of Oakland. “It’s been about a half a million dollars.” Even though the city recently shrunk First Fridays’ footprint and moved its end time up by an hour, the event still requires significant expenditures in the form of street closures, permitting, private security, bus reroutings, and cleanup — expenditures that have, up until now, been shared by an ad hoc and ever-shifting alliance of local businesses, neighborhood associations, city government, and the community group First Fridays Organizing Committee, but which were set to be turned over to the First Fridays Organizing Committee this month. However, according to Roberts, that group has failed to come up with the money it needs, and the city is no longer in a position to keep managing the event. “The group has some money in the bank, but it’s a little bit shy of even one month’s worth of costs …. For now, it’s a shared-cost situation. We’re doing what we can to keep it going. But [First Fridays] is living month-to-month, and on paper, looking at finances, there doesn’t appear to be enough to get past July. It’s kind of a challenging transition time right now to figure out what the future holds.”

But even if that future is downsizing, dilution, or a permanent or temporary end to the event — all of which appear possible — it may not be so bad for the galleries. “This is the interesting thing about Art Murmur,” said Roberts. “Art Murmur and the gallery scene has been going for many years prior to this past summer, when the street party bubbled up. In many ways, the street portion has kind of crowded a bit of the gallery patronage. Theoretically, yes, it probably brings more people and attention, but it doesn’t appear that that attention translates to more art lovers and art buyers at the galleries. It’s a really strange relationship.”

According to gallery owners, First Fridays have had a diffuse and muddled effect on their business. The event is chaotic, crowded, and full of distraction; several gallery owners told me that high-volume art buyers have confessed that they’re turned off by the scene. “Serious collectors — which are the only thing keeping us alive — aren’t into it,” Johansson said. In fact, that’s part of the reason the Art Murmur organization initiated its Saturday Stroll event as a lower-key alternative to the melee of Friday nights. And even if collectors do make it out to First Friday, the logistics of handling a sale in a busy gallery can be daunting: “It’s hard to make a transaction because there’s so much activity,” said Lonnie Lee of Vessel Gallery “First Friday is a time to take a scan and come back. It’s a time to show our work to a wider audience. It’s a great time to network with art types.”

And though Johansson described First Fridays as a “mixed blessing,” ultimately, she said, “After the first few times that they closed Telegraph, we lost money …. We were doing really well with our traffic before the city stepped in, so I wouldn’t mind it going back to that.”

Michael Broberg of LeQuiVive was a bit less diplomatic: “No, it doesn’t affect our sales. The only thing [First Fridays] has brought me is graffiti to clean up on Saturday.”

Indeed, despite all the attention being paid toward art as a result of Art Murmur and First Fridays — despite the fact that, Oakland’s art community has been praised around the world as well as in the national press like The New York Times, despite that every gallery owner I spoke to for this piece discussed at length the vibrancy of the scene — few galleries appear to be making significant money: According to a survey of five galleries undertaken by Mills College public policy student Victoria Swift on behalf of KONO, the average annual revenue for the galleries that responded was $32,750. Even on the most successful First Friday for which numbers are available — January 4, 2013 — the galleries’ average revenue was $80.10. Outside of auctions and major galleries, art has never been a high-yield business, but it appears that the primary benefactors of First Fridays are bars and restaurants and, especially, street vendors, which reap the twin benefits of vigorous foot traffic and minimal overhead costs: “Any boon there is is going back into these vendors,” Roberts said. Meanwhile, galleries are paying the bills in a variety of ways, and certainly not just by selling art.

“Sales are a plus to everything else that we do,” Broberg said. “We sell T-shirts to pay for the gallery. We do print production, we sell to collectors.” Other gallery owners, like Johansson, make the rounds at art fairs; Loakal, in which the Express is a partner, sells jewelry, gifts, and clothing in addition to art. Other spaces, like Creative Growth Art Center and the Rock Paper Scissors Collective, operate under nonprofit and collective business models, respectively. Maybe the signs will help.